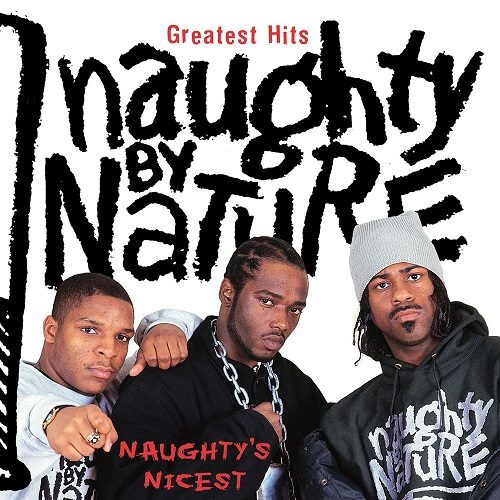 There was a time in hip-hop music when just a handful of labels seemed to both epitomize and personify everything about rap that was good. Priority. Def Jam. Wild Pitch. Tommy Boy. Though they all turned out one classic rapper and album after another, something about Tommy Boy seemed unique. Maybe it was their long history as a successful independent label. Maybe it was the cool logo made up of b-boys stylin’ and profilin’. Or maybe it was that uniquely sweet, slightly musky scent that a Tommy Boy cassette had when slit open. No bullshit. Back in the late 80’s and early 90’s, you could smell what the label was cookin’. When that odor hit your nose, you knew you were in for some good shit. Digital Underground. Queen Latifah. De La Soul. And of course, three of East Orange, New Jersey’s finest: Treach, Vinnie, and Kay Gee – collectively known as Naughty By Nature.

When they first hit the scene they were relative unknowns. Formerly known as New Style, the trio had been recording and rapping for some time but it wasn’t until Queen Latifah discovered and signed the group that the ball got rolling. Their chemistry for success was already in place – Treach as the street thug with a swift tongue, Vinnie as the chillin villain who smoothed things out, and Kay Gee providing monster beats for them to rap on. How monster? “O.P.P.” was Godzilla. When the single broke in 1991, it wasn’t just the rap world that took notice. The song opens with two perfect piano notes, followed by a funky bassline and some snappy drums, then Treach proudly proclaims his group the “army with harmony” as the singers are mixed in. By this point old school heads were recognizing the song as a reconstruction of Jackson 5’s classic “ABC,” but Treach was onto something much more playful and powersul with his personal portrayal of what the “O.P.P.” meant. The first two words are “Other People’s,” and as for the third – well:

“But for the ladies, O.P.P. means something gifted
The first two letters the same, but the last is somethin different
It’s the longest, loveliest, lean – I call it the leanest
It’s another five letter word rhymin with, cleanest or meanest
I won’t get into that, I’ll do it – uhh, sorta properly
I say the last P, hmmm… stands for property!”

Pure perfection. In three verses Treach records one of the smoothest “Freaky Tales” ever put on wax, offering pussy to the males and dick to the ladies, and pulling off the astounding feat of making it PG playable. With a theme everyone could relate to, a beat everyone could dance to, and the catchy cally and response refrain “Ya down with O.P.P.? YEAH YOU KNOW ME!” the song went from rap hit to national hit to global hit worldwide in record time. Fittingly, it’s also the song used to introduce neophytes to the story and legend of Naughty By Nature on the new compilation album “Naughty’s Nicest.” The follow-up track is their stellar contribution to the “Juice” soundtrack, known simply as the “Uptown Anthem.” Kay Gee flexes his superlative ability to mix together catchy drums and claps with music and raps, Vinnie gets a nice push in the second verse, but Treach steals the show with his flow and the hip-hop quotable “cussin’ wasn’t nothin’ ’til a black man rapped.” The song was so large, their debut album was later re-issued with it as a bonus track. As singles go though, it actually came after the next track on this comilation – “Everything’s Gonna Be Alright.”

“I couldn’t get a job, nappy hair was not allowed
My mother couldn’t afford us all, she had to throw me out
I walked the strip, with just a clip, who wanna hit?
They got ’em quick, I had to eat, this money’s good as spent
I threw in graves, I wasn’t paid – enough
I kept ’em long ’cause I couldn’t afford a haircut
I got laughed at, I got chumped, I got dissed
I got upset, I got a Tec and a banana clip
Was down to throw the lead to any deal attack head
I’d stilla been broke, so a lot of good it would’ve did
or done, if not for bad luck, I would have none
Why did I have to live a life of such a bad one
Why when I was a kid and played out was a sad one
And always wanted to live like just a fat one”

It was another huge hit for the rising titans of the rap world. The song’s gritty realism had to be toned down a little for commercial play with Treach lines like “I live right around the corner from West Hell, two blocks from South Shit, and once in a jail cell.” Thanks to Kay Gee’s smooth reinterpolation of “No Woman No Cry” by Bob Marley though, there was no holding back the crossover strength of the song. In fact despite the tragic and somewhat vicious tale of Treach’s background, the beat and the “everything’s gonna be alright” sung hook conspire against him to make the song uplifting. The same could not be said of “Guard Your Grill” though, their third single and fourth track on “Naughty’s Nicest.” In essence, the ode to getting your dukes up for a fight was designed to counteract street talk that Naughty was a crossover rap group. Treach was having none of it:

There’s no arguing with the fact any of these tracks are rap classics. One can’t help but notice though that from the opener of this album through the eighth track, every song included first appeared their “Naughty By Nature” debut. Since even with “Uptown Anthem” as a bonus track their first album was only thirteen songs long, by buying “Naughty’s Nicest” you end up with two-third of the release all over again. Conversely with sixteen tracks on “Naughty’s Nicest,” one-half of the album is in the bag if like many dyed-in-the-wool rap heads, you’ve already had their freshman release in your crates for a decade plus. In fact it’s both a blessing and a curse for this album that the trio were so popular in the early 1990’s that it’s almost impossible to imagine one would not have heard as well as owned most of these songs. With the next three songs all covered on their sophomore release “19 Naughty III,” there’s little before track twelve a veteran would be missing – although it’s still a good late pass for rap’s new generation who probably heard “Hip Hop Hooray” but may not know “Written On Ya Kitten” or “It’s On.”

Oddly it’s on their Grammy-award winning album “Poverty’s Paradise” that some of the selection starts to become more obscure. Despite the critical acclaim, their 1995 release featured none of the King Ghidorah sized super hits their first two albums did. The most popular song, “Feel Me Flow,” never hit higher than #17 in the Billboard Top 100. It’s still some smooth Treach lyrical shit though, proving he’s not only a witty verbalist, but a dexterous one as well:

“The flow pro poetical, with skills only a vet’ll know
Better know where’s the wetter flow that’s on point like decimals
Manhandlin new crews, partyin with the Zoo Crew
Looking for the pinkin poo-poos, I thought you knew too
Stone styles of stamina, jammin to while we plannin ta jam
We bust, plus we’re the party amateur damagers
Managin damagin mics, men and even mannequins
You’re a fan again now I wanna know who’s the man again?”

Treach has never had to fear not being the man. Unfortunately though for NBN it’s not surprising that “Naughty’s Nicest” ends with the tracks “Craziest,” the Tupac tribute single “Mourn You Til I Join You” and only one song from “Nineteen Naughty Nine: Nature’s Fury” – the slamming but highly overlooked track “Dirt All By My Lonely.” Overlooked, because although Vinnie and Treach’s skills were never overlooked as MC’s (the latter in particular) their sound didn’t seem capable of recapturing the crossover success, public imagination, or hip-hop hero worship their early work did. In fact, the album’s final track was not even a Tommy Boy release, as the label had long since abandoned them to the clutches of Arista. Their descent only continued from this point on. Producer Kay Gee left the group and the trio shrank to a duo as Vinnie and Treach released “Iicons” on yet another new label, TVT Records, in 2002.

Where are Vinnie and Treach now? Not seen on the scene since their last single “Feels Good” with 3LW, one could honestly question whether the group still exists and/or plans to try again to reach a plateau that seems long and far away. It won’t be easy to get there releasing greatest hits albums that offer what most old school heads already have, a few things they didn’t have but don’t care much about, and nothing much in the way of exclusives. In fact the ultimate irony is that this is not even the only “Greatest Hits” album from Naughty By Nature. Before Rhino got involved, Tommy Boy had already released “Nature’s Finest” in 1999. It’s essentially the same album as this one, with a slightly more creative shuffling of the track order (not nearly as chronologically progressive), a few unique remixes, and a live song. How many times can the NBN catalogue be repackaged? Apparently ad nauseum. While it’s not the best of the two such comps available, it’s still a good listen and probably an excellent buy for those who never owned a single classic Naughty album. The score that follows should be in no way reflective of the quality of the songs contained within, but instead reflective of a lack of thought and creativity in putting them together that does nothing for their long-term fans and only helps serve the image that as a rap group, they are now finished for good.