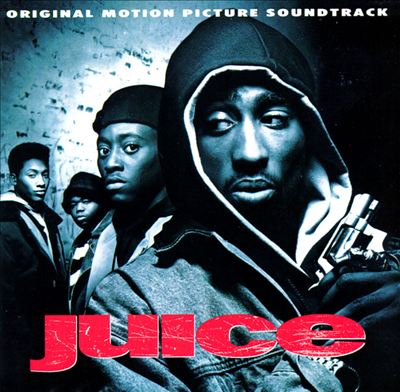 “Wild Style,” “Beat Street,” “Krush Groove” – soundtracks were among the first hip-hop albums to ever be released, without always containing exclusively rap music. In the later ’80s, rap songs began to appear on soundtracks that were predominantly rock- and pop-driven, such as “Ghostbusters II,” “Rocky V” and “Less Than Zero.” The undisputed king of late ’80s soundtracks with a hip-hop twist remains “Colors.” Both the movie and the soundtrack had a lasting impact. For the author of the theme song, Ice-T, it meant starring roles and soundtrack contributions galore. More importantly, by the early ’90s the hood flick had arrived, often tragic tales of young men getting caught up in the struggle for money, power and respect. Crowning a champ from that period is much harder, as there are countless contenders, many of them more worthwhile than the films that they promoted. While not my absolute favorite (that would be “Menace II Society”), “Juice” is clearly one of the top five hip-hop soundtracks of all time, and a top-notch compilation in its own right.

Written and directed by Spike Lee cinematographer Ernest Dickerson (who also shot _Krush Groove_ and _Brother From Another Planet_), _Juice_ followed in the footsteps of prolific pictures from Mario Van Peebles (_New Jack City_) and John Singleton (_Boyz N The Hood_). Nevertheless, the movie made its mark, last but not least thanks to one of its leading men, Tupac Shakur. Rap references to his character Bishop are numerous. More physically fragile than in his Death Row days, Shakur plays a deranged teenager who ends up killing members of his own crew. The movie gives few clues as to why Bishop goes on such a rampage after the initial killing of a store owner. With some more acting experience, Tupac would have certainly been able to deliver a more convincing performance. But compared to the roles other inexperienced rappers have since been cast for, Bishop is a powerful character that allows Shakur to vent some of the rage that fueled his art but which he often couldn’t contain in real life. With but one album to his credit, however, 2Pac the artist and the public persona were still taking shape in ’91 and ’92. It is bizarre to remember the same young man dancing cheerfully as a member of Digital Underground in 1991’s _Nothing But Trouble_ (some wacky Dan Aykroyd/Chevy Chase vehicle), and to see him lose it completely on screen just one year later. That’s not just good acting, it is a career-defining (and possibly life-shortening) transformation.

Some have argued that Bishop’s demon took possession of Shakur to the effect that being unpredictable became his second nature. As Guru put it that same year, “It takes the illest brother just to get respect,” and Pac was clearly thinking along the same lines by 1993. But at which point does respect turn into fear? Some years later, DMX (one of many 2Pac successors), barked: “Y’all niggas don’t respect me but you fear me / and fear is better than respect, y’all niggas hear me.” Respect has many positive connotations, fear has none, except maybe to the individual being feared. Tupac was certainly well respected, for his art as well as for managing to be “the illest brother.” We can only hope that nobody had any real reason to fear him, outside of the system he was rebelling against. “I love it when they fear me,” he exclaimed on 1993’s “Holla If Ya Hear Me” single, but as time went on, it became evident that Tupac Shakur was mainly a danger to himself.

The strong connection between music and movies that marks Tupac Shakur’s later career raises the question why there are no 2Pac songs on “Juice.” Maybe something had been planned but like the 2 Live Crew/MÃ¶tley CrÃ¼e collaboration “Crew to CrÃ¼e” didn’t make the cut, or maybe the people responsible purposely steered clear of such cross-promotion. Whatever the reason, it didn’t prevent other rappers from starring in the movie and having a song on the soundtrack at the same time. However, most roles cast with hip-hop celebrities in _Juice_ are laughably small, and you’ll have to pay attention to catch appearances by the likes of Treach, EPMD, Special Ed, Queen Latifah and Red Alert.

What makes “Juice” so exceptional among hip-hop soundtracks is the fact that many of the songs mirror the theme of the movie. Five even mention the word ‘juice’ in their lyrics. Later hip-hop soundtracks would often claim to feature ‘music inspired by the motion picture,’ but “Juice” is one of the few soundtracks that can live up to such a promise. Thankfully, the different contributors adopt different perspectives. With “Uptown Anthem,” Naughty By Nature mark their territory as thoroughly as Bishop did. Like “the three-man threat” from Jersey, Q, Bishop, Steel and Raheem were a team until one member decided, “I do my dirt all by my lonely.” EPMD serve up a dose of that “hardcore funk that make you wanna pump a chump.” E Double knew, “My posse’s thick so I will never get jumped.” And so did PMD: “If there’s a problem the Hit Squad rolls mad deep / so I can rest my head and get some sleep.”

But later that year, both EPMD and the Hit Squad broke up. On the other side of the continent, MC Pooh and the Dangerous Crew got into some serious funk that would last for several years. It’s hard not to consider it an omen when Too $hort’s “So You Want to Be a Gangster” sounds like a response to his protÃ©gÃ©’s “Sex, Money & Murder.” Referring to himself as “a psychopath comin’ straight from the Oaktown,” and cautioning, “Step outta line, it’s mandatory I hurt ya,” Pooh probably comes the closest to Bishop, portraying a ruthless thug robbed of any illsions (“We were born to die anyway”) and caught up in delusions (“I’m one of the biggest, baby, and refuse to get took down”). $hort on the other hand tries to talk some sense into the young buck:

“All your homies tryin’ to tell you that ain’t cool
playin’ shoot ’em up like a fuckin’ fool
But you’se a gangster, one they can’t destroy
Don’t even give a fuck about your boys
You go for self, you wanna be on top
Fucked around and now your brother’s shot”

Cypress Hill inject only a small dose of reflection into “Shoot ‘Em Up” (“He’s got the juice, how long will it last him?”), but reflection is well taken care of by the two standout tracks. Even after all these years, “Juice (Know the Ledge)” remains one of the most awe-inspiring rap tracks of all time. The writing and the theme bring “New Jack Hustler” to mind, but where Ice-T equipped his performance with tongue-in-cheek sarcasm, Rakim relies on his proven “I Ain’t No Joke” dead-seriousness. Progressing from the venturesome “Let’s see if I know the ledge” to the regretful “I guess I didn’t know the ledge,” “Juice (Know the Ledge)” features a master of his craft at his absolute best. Considerably less experienced, Watts teenage crew Juvenile Committee came up with the most outspoken song on “Juice.” “Flipside” is the movie’s unofficial theme song, as the four rappers denounce a posse’s “weak link” “who wanted all the juice.” To them, “juice is a five-letter word of corruption” that has “brothers tryin’ to play God / and they job is keepin’ the world in their hands / but that’s a mission that’s impossible / it’ll only end up being a lotta people in the hospital.”

Far from one-dimensional, “Juice” covered a wide range of styles. Since the project was released through their MCA imprint SOUL, it was a welcome opportunity to position The Bomb Squad (or what was left of it) as jacks-of-all-trades who were able to supply a reinvigorated veteran with a slamming hardcore/dance hybrid (Big Daddy Kane’s “Nuff Respect”), to foster a new breed of rap acts (Son of Bazerk, re-introducing themselves with “What Could Be Better Bitch”), and to successfully dabble in soul (Aaron Hall’s “Don’t Be Afraid,” with a musical background so classy you’ll never figure out how bad the song actually is). On the R&B tip, “Juice” runs the gamut from Teddy Riley’s new jack swing classic “Is it Good to You” (a tightened up non-rap version of the Heavy D & The Boyz song of the same name), to pillow talk from one Rahiem (“Does Your Man Know About Me”), to “People Get Ready (Remix),” the introduction of British acid jazz figureheads The Brand New Heavies (accompanied by the lovely N’Dea Davenport) to the American market. Only one selection wasn’t particularly fresh, and that was Salt-N-Pepa’s “He’s Gamin’ on Ya,” whose stiff Hurby Luvbug beat makes you realize how desperately they needed the update of “Very Necessary.”

Like most records, “Juice” loses some of its initial impact in retrospect. In early 1992, “Juice” was an unprecedented offering of exclusives by some of the day’s hottest artists. It proved that Cypress Hill and Naughty By Nature were able to maintain the standards set by their debuts. It gave people nationwide the chance to catch a whiff of Ant Banks’ potent Oakland funk. It announced strong new albums by longtime favorites EPMD (“Business Never Personal”), Eric B. & Rakim (“Don’t Sweat the Technique”) and Too $hort (“Shorty the Pimp”). And it made it necessary to go see the movie. Or respectively, seeing the movie made it necessary to obtain the soundtrack. While the use of these and other sounds (for instance Cypress Hill’s emblematic “How I Could Just Kill a Man,” or a handful of rather simple Bomb Squad beats) in the movie’s score was predictable, it was also the potential real-life soundtrack of the four protagonists, not just of Omar Epps’ character Q, who is torn between his deejaying ambitions and the misguided loyalty to his crew. As time went by, “Juice” began to show its age. For better or for worse, rap sounds different these days. Still, this compilation remains a quality cross section of early ’90s hip-hop and R&B that is well worth digging up.