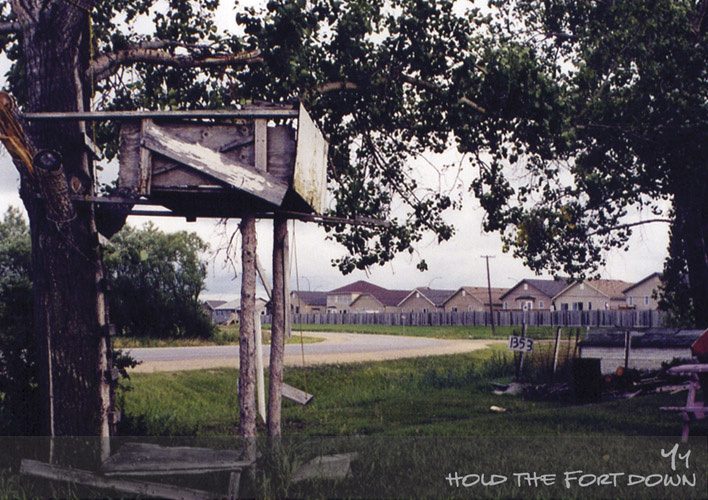 Yy :: Hold the Fort Down

Simplicity, brevity and humility are usually underestimated in today’s hyper-inflated rap world. “Get Rich or Die Trying” was a force-fed album that just happened to be good. Jay-Z and Outkast can’t edit anymore, so now we play executive producer (unpaid) and determine the best cuts on double CD’s. Canadian Yy’s (pronounced yie) album “Hold the Fort Down” isn’t great — some songs sound immature, unfinished and unpolished — but the 35 minutes of sound, filled with sparse beats and reflective rhymes, play like an indie album from ’93. Raw, flawed and honest.

The eight-song album begins with “Back It Up,” a laid-back McEnroe-produced stringfest that sounds like Casual and Del fiddling on A-Plus’ MP3000. Starting his first solo venture (away from group Your Brother In My Backpack with Gumshoe Strut, Satchel Paige and General Gyst) Yy admits that he has a lot to prove — but he needs fans to listen to him as aggressively as he’s penning the rhymes:

“As a solo MC I haven’t outputted anything out yet
I’m a superhero walking around without an outfit
Looking for trouble, find it in my space
No one can read my name, no one can read my face
Don’t judge if you’re not reading minds
Less likely that I’m rocking an instrument than feeding minds
Cuz if your reed breaks, then it indeed takes
Much to make you move like everybody eating wheat cakes
…
And if I’m not with the Gumshoe Strut, then I’m with Candace
My nature is to break things and people just don’t understand
That means that there are some guys I don’t want as a fan
I won’t feel insulted if you say that I’m not much of a man
Cuz as a superhero I haven’t helped anyone out yet
I’m a solo MC trying to get help without any help yet
Just getting power when I’m rockin’ a gig
Here and blundering was my move if you try something too big
But only if you let it
Why don’t you get up and get it
Some rhymes aren’t clear, but I’d remember if I said it
And I’d bet it’s better without the B.S. on stage
Catching ideas and seeing what we can groove like Satchel Paige
You put your trust in Yy, so it’s a must that I rap
Everything that I say I justify, yup
Tough like chaps, beef like drinking at a street light
It’s only 10% Dis, we never beef fight”

His boy Gumshoe Strut fills the guest spot (and producer) role on “Take As You Will,” a scathing view of historic white-washing, land theft and government scandal. The hypnotic drums and sparse piano really give this song incredible texture, and for a moment you are amazed that such a powered keg is hidden on a CD from Winnepeg.

Unfortunately, the rest of the album doesn’t hit as hard, almost as if Yy becomes less motivated to push his complex metaphors out so we can receive them. “Dumb It Down” starts off interesting, with a message from a label exec asking Yy to do as the song title suggests, but then in the actual song Yy makes the mistake of parodying popular rappers while not actually making a good song himself.

The production duties, pretty much split between McEnroe and The Gumshoe Strut, are relatively good, but even the stronger beats aren’t strong enough to keep “Gunned Down” or “Yy” interesting. However, a nice ending cut (right before the CD Bonus song “There’s An Era In Your History”) is “Me.” You would be hard-pressed to come up with a better song title — again it’s Yy saying that, even if you disagree with him, at least know that you’re seeing the real him. McEnroe’s production channels Hieroglyphics once again, and his deep vibraphone notes lull the listener into Yy’s world:

“Contrary to what anyone’s heard
I go through life by myself, not on anyone’s word
Just discovered everything on my own the first time
If I told about it, go back to the first line
Trying to move like it’s burning my ass
Doin’ hip-hop, that’s somethin’ you can’t learn in a class
Study it, live it
If I find a whole in my history, I putty the didn’t
Fix it, learn to write on my own
The style you’re hearing now I did on my mike back at home”

He’s on a promo tour right now, but Roc-A-Fella isn’t co-sponsoring. He has a lot to say, but he fit it easily onto one CD. And his album is far from perfect, but it is better than perfect. It is an original.