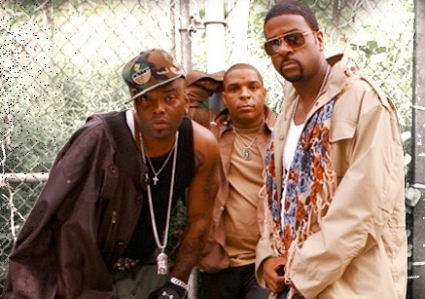 holds a special place in your record/tape/CD collection. One of the only groups in the history of hip-hop that gave rap fans gritty, reality based, rhymes, while at the same time pleasing the masses with pop anthems, Naughty By Nature managed to create a fan base that extended from the streets to the suburbs. Recently, however, the group has been on an extended vacation. Although they’ve been touring, fans haven’t heard anything new from them since 2002. When RapReviews caught up with Treach this week, we found out that’s about to change. Treach also revealed why it’s taken the group so long to come out with a new album, the biggest way in which he feels Naughty By Nature changed rap music, and the group’s initial thoughts about releasing “O.P.P

Treach: Right now Naughty By Nature is looking at an album release, hopefully before the new year comes in. We still tour. We’ve done 100-150 shows a year since ’91. Kay Gee rejoined the group, so this is going to be our first album together in like ten years. Our last album, Icon, was on TVT and it was me and Vin alone, and was released in 2002. I’m also still doing the movies and television roles and stuff like that. Just staying busy and keeping the brand alive.

AB: That’s a huge gap in-between albums. Your feud with Kay Gee was well documented, but were there any other reasons you stopped recording? Did you temporarily lose the passion?

T: No, it was never that, it was actually more or less this label situation and the politics of the business. When we first came out with the Icons album we had the first single with 3LW, “Feel’s Good,” which was like the #1 hip-hop single for 12 weeks straight, so we were looking to go forward to the next single and hopefully have 2-3 singles off of that album and really smash em in the head and let em know that Naughty was back officially, but the label, for whatever reasons, wanted to stop at one single, basically just quit on it, and go to the next album. We come from an era where it’s not about a first week record sales, it’s not about a first month, it’s about the whole project, so we really felt as though TVT didn’t see our vision as far as really being committed to a project. We felt as though we had many (potential) singles off that album and to just get pushed off and work on another album under those circumstances, we felt as though the same thing could happen again on the next album. Instead, we sat out for a while to get our release off of there so we could go somewhere else, but around that time, as you know, 2003-2004, that’s when the whole industry sort of crashed. Labels weren’t signing anybody, and the independent thing, if you really couldn’t finance it 125,000% it didn’t make sense to put out music. So we stayed on the road and we’re still on the road constantly. We were like, until we bring these numbers up and have somebody interested in signing us, or see where the game is changing, it doesn’t make sense to just put out a project and nobody ever hears of it. We wanted to build that brand, which we did and it paid off.

AB: I’m guessing when TVT went out of business you weren’t very surprised.

T: No, not at all. You gotta realize on the other end of it it’s like the loyalty wasn’t there. We woulda sold a million out the box. We would have been able to do whatever we wanted. It’s like the confidence with us being Naughty By Nature, we thought we would have had more respect on the label like, you know what, even if it’s not three singles, which we were used to doing for albums, even if it’s two singles, it’s like damn, you had the number one hip-hop single, you damned near sold a quarter of a million albums, which was basically not even heard of then for artists that have been in the game as long as us, like yeah, let’s throw em another single, let’s work it, and go at it, and see how it goes, and then go on to the next project. When TVT shut down it definitely wasn’t a surprise to me.

AB: Before Naughty By Nature there wasn’t a lot of street oriented hip-hop making its way to the suburbs. Do you consider yourself a trailblazer in that aspect?

T: Oh definitely. We are probably one of the only hip-hop artists that have been able to have pop success and a hardcore hip-hop following. Once it’s either or, you’re either underground or you’re a pop group, there isn’t really too much in-between, so for us to be able to drop any hardcore hip-hop song that we want, plus come out there and have pop dominating songs, is basically unheard of for hip-hop

AB: Having a pop anthem is obviously good for notoriety, and the wallet, but does it hinder creativity at all when it comes time to make the next album and you realize you have to have another “O.P.P.” or another “Hip-Hop Hooray?”

T: When we were doing the first Naughty album we didn’t know what a pop record was. We came from the era where you had to have originality, you had to have records that sounded different, you had to have wittiness, you had to have something that was catchy. When we came out, a lot of the artists would go straight to the hook and you would just hear scratching on it. There wasn’t really a hook there. We changed the game to where everybody had to have a hook included, but we didn’t know how to make a pop record. “O.P.P.” took off, but that’s a cheating song. That’s a record that we thought might not even get played because of what the record was talking about, but still to this day people are trying to figure out exactly what it means.

AB: You are celebrating a big birthday at the end of the year. What do you think it means to be 40 in hip-hop?

AB: You’re part of only the second generation of emcees that have turned 40, so there’s really not much of a blueprint for this.

T: Yeah, but your destiny is in your own hands as long as you know how to recreate yourself, change with the times, and keep making music that any genre or any age can relate to. Once you put those elements all together it’s like you have a renewable situation.

AB: Speaking of your destiny and your future, why don’t you tell me about the album you’re working on right now?

T: What we’re putting out now is like an appetizer, a teaser. It’s called Garden State Greats. One part of Garden State Greats consists of five members, but the other part, what we do with the mixtapes is anybody that’s from Jersey that has a mixed song that makes it through the pick and choose process, is a part of Garden State Greats, so it’s like bringing that type of movement like the South had. Jersey is basically looked over in hip-hop. You have New York, you have the West coast, you have the Midwest, you have the South, but Jersey is not really included in that New York mix unless you do massive collaborations with New York artists. Jersey is so close to New York, but we have our own swagger, our own style, our own hip-hop vibe. The history of hip-hop starts way back in Jersey with Sugar Hill Gang, Queen Latifah, Flavor Unit. We’ve been in it for a minute.

AB: Aside from the music, are you working on anything film-wise right now?

T: Yeah, I got a few scripts right now that I’m looking over. The last thing I did for the screen was 50 Cent’s Before I Self Destruct, Steven Seagal’s Today You Die, and Connors’ War. The last television things were The Sopranos and Law & Order. I actually have a meeting in another hour in the city to talk about different movies and scripts and everything else. That’s definitely in motion.

AB: You worked with Steven Seagal, which is awesome. Did he teach you any crazy moves?

T: Oh yeah, he showed me some things. Definitely.

AB: A lot of people may not realize it, but Naughty By Nature did Shane McMahon’s WWE entrance song, “Here Comes the Money

.” Any chance we’ll ever see you on Raw or Smackdown?

T: Aw man, I don’t know, our smackdowns are usually 100% real. When we do it it ain’t no bumpness, but it depends on when they call us. We don’t say no too much if it’s in the realm of expanding the brand.

AB: Finally, what else do think fans should know about you that they may not know already?

T: I’m a father. I’m a loyal friend. I’m a hardcore hip-hop artist, but I’m not ignorant. I’m intellectual, I’m a businessman, I have a lot of different branding opportunities that are coming up, not just for Naughty, but for Treach. I feel like I’m 20 years old, like when we started, I really do. Once we come around again, whether it’s with Naughty, or whether it’s with the Garden State Greats, all the folks I’ve done records with across the country and the world, those records are gonna start flying out of nowhere. You’re gonna be like “yo, man, when does he sleep,” when a lot of the stuff has been recorded for 5-10 years ago.