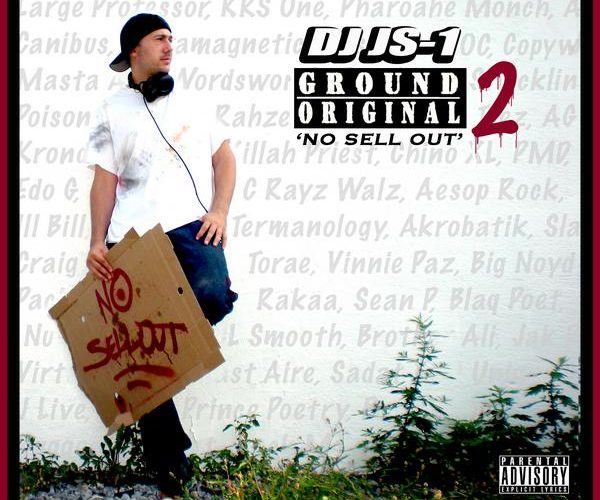 Want to hear Aesop Rock share bars with C Rayz Walz and Vast Aire? Want to hear Kool Keith and Ced Gee, one-half of Ultramagnetic MCs, hold their own against Canibus, Prince Poetry, and Rahzel? Ever wonder what it would sound like to hear Brother Ali, CL Smooth, and Sadat X share a mic? Our how about a track where former rivals Canibus and KRS-1 put their beef aside in the spirit of hip hop?

These are just some of the incredible moments that DJ JS-1 offers the listener on his latest album, “Ground Original 2: No Sell Out.” In the same way that Khaled manages to get the creme de la creme of Southern rappers together, DJ JS-1 gathers classic old-school rappers, underground legends, and even a few unknowns, all with the goal of creating some of the realest, most hardcore hip hop this side of a Bronx block party. The beats almost all feature booming drums, sampled soul or rock guitars, and plenty of scratching and cut-in vocal snippets. There are no synths here – strictly old school, the sound of DJ-produced hip hop, steeped in vinyl and turntablism.

DJ JS-1 realizes the potential of “No Sell Out” on tracks like “Nuthin'” where verses by CL Smooth, Brother Ali, and Sadat X blend seamlessly. It’s great to hear a newer MC like Brother Ali rapping alongside some of the rappers that inspired him to pick up a mic. “Karma Killerz” blends the absurdist rhymes of Aesop Rock with Vast Aire’s more sinister flow to good effect. “Ridiculous,” which reunites old friends O.C. and Pharoahe Monch, is further proof of just how good both MCs are. On “I Don’t Mind,” Ill Bill, Virtuouso, and Slaine take on corporations, drugs, the government, and the economy, rapping “they shoot monkeys into outer space/homeless motherfuckers without a place/and billion dollar corporations race/for the blood-drenched finish line…/corporate moguls have fucked the public/on your way to work/suicidal in the subway.” Tracks like these are the underground hip hop version of fantasy baseball, with JS-1 creating dream team collabs.

Unfortunately, the album is kept from greatness by a lack of variety in either the beats or the rapping. This is 100% hardcore hip hop, and almost all the beats are similar sounding boom-bap with skillful cuts and scratches. It’s great for the first five tracks, but it gets monotonous as the album drags on. Likewise, while there are over twenty MCs on the album, too many of them rap in the same aggressive style with the same subject matter: they are the realest MCs ever, and they will murder you on wax. Or as Chino XL says, “I’m not a conscious rapper/hit you on the head, make you an unconscious rapper.” A few songs like that are fine, but these battle rhymes make up the bulk of this 21 track disc. It gets repetitive, and you wonder if the MCs are trying to convince the listener or themselves of their might. There is a defensive tone to many of the songs, with the rappers sounding more insecure than in command of the mic. There is too much tell and not enough show.

In the end, there are enough standout tracks on “No Sellout” to make it worth sorting through the mediocre tracks. If anything, DJ JS-1 has given listeners an overabundance of music, and there is easily an album’s worth of solid material here after you separate the wheat from the chaff. Fans of real hip hop will enjoy cherry picking the best joints here and listening to them on repeat. “No Sell Out” doesn’t strike gold all the time, but its successes more than compensate for its misfires.