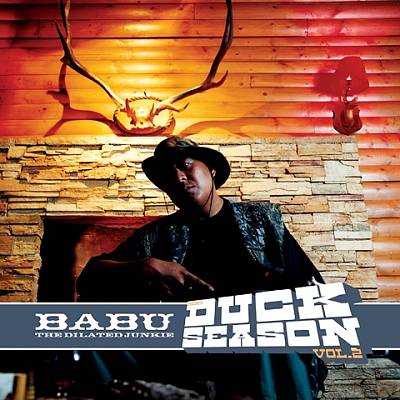 It’s that time of the year again, when the forests are ablaze with red, yellow and gold, when farmers harvest the final crops of the season, when the autumn haze clings to the hills, when children anxiously await the evening of Halloween… and when DJ Babu goes duck hunting. It’s been a year since the Beat Junkie first declared open season on sucker ducks, and while Daffy Duck and Bugs Bunny still argue over whether it’s duck or rabbit season, Babu, not to be fooled like Elmer Fudd, unloads his bangers on foolish fowls.

This time around, Babu presents strictly recent cuts and more self-produced ones. Again straddling the fence between mixtape and production showcase, “Duck Season 2” is not meant to particularly highlight Babu’s scratching skills, although fiends will get served on the closing “Beat Junkies Outro”. The guest list is low on surprises. Gang Starr (“Deadly Habitz”), KRS-One (“Underground”) and Jaylib (“The Official”) are all featured with previously released material, and the rest of the appearances come largely from affiliates, either by way of The Alchemist (Infamous Mobb, 1st Infantry), or folks from around Babu’s way (Rakaa, Evidence, Phil Da Agony, Defari, Planet Asia, Krondon, Chace Infinite, Medaphoar, Oh No, Wildchild).

But first we’re off to the East Coast with two apparent exclusives. Talib Kweli flows less frantic than usual over a horn-laden track named “Raise the Bar”, while Andre the Giant does his thing over the piano sprinkles of “The Street”. After that, it’s back to Cali with Chace Infinite of Self Scientific. If you’re like me unsure about who produced the previous tracks, Babu’s programming is evident here, the smooth sound and the intricate editing reminiscent of Dilated Peoples’ “Expansion Team” album. Lyrically, “Do For Self” is so clear and insightful it makes me want to check out Self Scientific (being I’m still sleeping on them).

After a short interference by rappers/producers Madlib and J Dilla performing as Jaylib (“The Difference”), Rakaa Iriscience picks up where Chace left off with the Jake One-produced “Ends to Means”, making us relate to three individual struggles (the rapper, the stripper, the hustler) in a way that we wonder with him if “the ends justify the means.” While Rakaa’s method to wake people up is more on the sublime side, Phil Da Agony slams his message in your face on “Elevate, Build & Create”. But his hard delivery and harsh words only help him get his ultimately positive message across:

“Love conquers hate
The fate is in the palm of your hands
Graduate, develop your plans
Stand on your own two, be your own man
Work hard, do what you can, then expand
Nothin’ holdin’ you back
My son, I got both of our backs
From similac to handin’ you stacks
Your mama Mexican and I’m black
[…]
All we do is hate on each other, degrade our own brothers
support the hoes but won’t support our mothers
My brothers, we got our work cut out, they tryin’ to cut us out
gut us out, eat your heart out, rappers blooded out
We on the same label, in the same system
on the same cable, eatin’ off the same table”

Fans of the Dilated/Likwit camp will already be familiar with Defari’s “Behold My Life” remix featuring Rakaa and Evidence, but the heartfelt autobiographical reflections set to a velvety track are definitely a nice inclusion, whether you’ve heard the track before or not. Defari later joins Babu to form The Likwit Junkies, a temporary but still classic MC/DJ outfit: “The DJ rock tables and I rock rhymes / we all say watch these labels, they all do crime / we all slaves to the Matrix, but nine into five / the world gotta hear my statements, on that I’ma ride.” Too bad “I Got This” is seriously held back by its dull hook. Planet Asia got that one right on “Right Or Wrong”, adding extra emotion to the meaningful chorus: “It don’t matter if it’s right or wrong / I’ma get my hustle on / you actin’ like it’s somethin’ wrong / I’m just tryin’ to put my peoples on / gotta get off that ‘to each his own’.”

It’s a common complaint that this particular circle of rappers often lacks the margin that makes a good rapper a dope rapper. While they all have their moments of excellence, folks like Defari and Planet Asia can also be most average. When it comes to songwriting, Krondon’s “The Song” is another incriminating piece of evidence for this. When it comes to rhyming, the culprits are caught in the act on “Live From Defcon Freestyle” featuring Defari, Phil Da Agony, Krondon and Planet Asia. Good thing Babu still has his Dilated Peoples to save the day on “Duck Season 2 Freestyle”. A dope beat doesn’t hurt either. For reference, check “Time to Rip” with Medaphoar, Oh No and Wildchild.

Even though its dark vibe may be a few shades too gloomy for “Duck Season 2”, The Alchemist’s “Serious (The New Message)” (as heard on Mobb Deep’s “Free Agents”) is still a sure bet for any mixtape. Prodigy’s update on “The Message” over the menacing soundscape is pure Mobb music. The Infamous Mobb’s “Think Fast” is on the lighter side with its glockenspiel-like keyboard touches, but another good representation of the QB. Sly Boogie and Saigon’s “Booyakah (Click Click)” has already entered the mixtape circuit. Babu laces us with the “OG Version”, and regardless of what any other version sounds like, this one bangs hard, doing a good job of winding “Duck Season 2” down.

Only one track left now, the aforementioned “Beat Junkies Outro”. Here, Babu is joined by Rhettmatic, J-Rocc and Melo-D to spark a firework of scratches. This last track will make you long for more of the World Famous Beat Junkie’s notorious needlework. Cutting is kept to a minimum as Babu is intent on presenting his selections in one piece, so that the mixing usually is limited to the end of a track, introducing the next one. From a mixtape aspect, “Duck Season 2” certainly delivers with many exclusives and a clear musical profile. Unfortunately, Babu’s turntable skills are underexposed, skills that surely would put him ahead of the competition among so many professional mixtape compilers who don’t know a thing about mixing. For Babu, who has already tried many a format (beginning with his legendary battle tool “Super Duck Breaks”), it looks like the next step will be an entirely self-produced album.