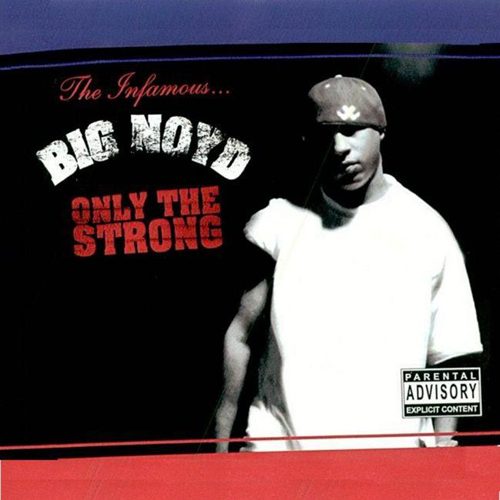 Big Noyd :: Only the Strong

When you come across an album that turns out a complete failure, you are tempted to look for reasons for said failure. But every examination has its limits. Some things are to be accepted, and some don’t really deserve to be explained. Maybe Big Noyd is really nothing more than “the next best gat-slingin’, rap-singin’ nigga outta Queensbridge,” as he so aptly described himself on the single that made people look forward to this album, the Alchemist-produced “Shoot ‘Em Up (Bang Bang)”.

With exactly one EP under his belt (“Episodes of a Hustla” from 1996), Noyd celebrates his 10th year in the industry. He made his debut in 1993 on Mobb Deep’s “Juvenile Hell” and has been featured on every Mobb album since. The most classic moment in his career might have been the short acapella on “The Infamous”, where he gave a run-down of his multiple court dates (“Just Step Prelude”), and while too short to be of any greater significance, “Episodes of a Hustla” was a refreshing debut laced with unusually slick Havoc production. To this day its lead single “Recognize & Realize”, a duet with Prodigy, remains a shining example of mid-’90s splendor.

In 2003, Noyd has additional backing by The Alchemist, but despite its high-profile production team “Only the Strong” falls short in every aspect. Beat-wise, Havoc starts off promising with a set of cold, percussive keyboard stabs kicking off “Watch Out”, but because they operate independently from the rhythm section, the track never really comes into its own. “We Gangsta” places an organ somewhere far in the background, while the front is taken up by random drum programming aimlessly parading up and down. “All 4 the Luv of the Dough” combines a frail guitar sample with weak drums and bass, while the keyboard textures of “Invincible” lack the darkness and depth we’ve come to expect from Havoc. Alchemist, who seems to be in top shape these days considering recent jewels like “Backwards” featuring Mobb Deep and “Marathon” by Dilated Peoples, performs slightly better, but his two standout tracks on “Only the Strong”, “Shoot ‘Em Up (Bang Bang)” and “Air it Out”, where already on the bonus disc of “Free Agents”. “NOYD” works well because of its cinematic sample but is hardly innovative, and as soon as he ditches the samples (“Noyd Holdin’ it Down”), the result is equally anemic as Havoc’s contributions.

Noyd himself has a hard time flowing properly over these beats, lurching from side to side, working his way through somehow, but seldomly displaying any finesse in his flow. His writing is equally erratic. Simplistic gun play and tough talk is all Noyd has to offer, his topics rarely ever elevating beyond the “I’m gangsta and you’re not” level. “Shoot ‘Em Up (Bang Bang)” worked well as a reintroduction of Noyd. He made you nod in agreement when he declared: “Niggas know my name, niggas know my gun bang-bang / niggas know what time it is, niggas know my style, kid / niggas know I rep the Bridge,” but a cut like “We Gangsta”, which follows the same format, is nothing more than a weak rehash. “Shoot ‘Em Up (Bang Bang)” was worthwhile because of clever quips like “niggas screamin’ they hood but outside of they hood they nothin'” and the lighthearted twist at the end:

“Every time they tell me put my gun away I tell ’em yeah right
Boy, I (shoot ’em up, shoot ’em up) cause I ain’t tryin’ to fight
And I ain’t dyin’ tonight, I’m triyn’ to scoop me some boots
to wear ’em out until they worn out, that’s right
And anything else is just uncivilized
I (shoot ’em up) tryin’ to cockblock with the cutie pies”

A rare moment indeed. As rare as Noyd alluding to his legal troubles on “Going Right at ‘Em” (which features PMD and flips a largely underappreciated sample). “Shoot ‘Em Up Part 2” is okay as a sequel because it references “Recognize & Realize” parts 1 and 2, the big bulk of “Only the Strong” however is forgettable but not forgivable. Not when you feature a singer as bad as the one on “Invincible”. Not when your idea of a clever punchline is: “What is this, what faggot rap nigga think he gully? / I ice-pick his face and leave his whole shit bloody / his new rap name will be MC Ugly.” Not when you spend the entire album talking about how you pack heat and cock back and squeeze triggers and shoot ’em up, etc. and go thinking that a line like “blackman, let’s take a stand now, put down the toaster” will have any effect.

On the closing “NOYD”, Prodigy says about his partner (paraphrasing Audio Two): “On DVD he’s rated R, he gifted and he goin’ far.” I don’t know about DVD, but on CD Noyd shouldn’t be rated too highly, he is by no means gifted and probably won’t go far.