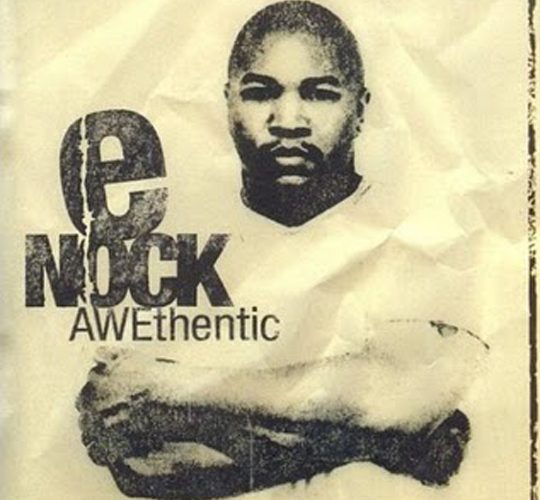 I would think that most music fans have never given much thought to the existence of Christian Rap, or “Holy Hip Hop” as E-Nock dubs it. And those who have considered its existence, without any real exposure to it, probably come away a little confused at the notion. “Holy Hip Hop” – isn’t that some sort of paradox? How does “Holy” figure into an art that seems to be all about the promise of materialistic wealth and overt sexuality? E-Nock’s point is that it doesn’t, but it’s not the holiness that’s the problem; it’s the perception of Hip Hop.

“Nocktroduction” does pretty much what it says on the can. It introduces E-Nock’s flow as easy, although a little challenging, and it introduces the subject matter that makes up the greater part of “AWEthentic”. E-Nock and Much Luvv Records are keen to emphasise that their Hip Hop (despite its “specialist” classification as Christian Rap) is a whole lot more “real” than what’s found on radio and TV playlists, and they make a fairly good case. If Hip Hop was originally an expression of individualism, then it seems reasonable that Christian Rap – even to those with no sympathy for its messages – should be seen as containing more “realness” than sound-alike, bling-blinging commercial records. All in all, this suggestion isn’t a bad place to start.

Through the lush, cinematic “Liberation” and the sliding accordion sounds of “Change”, E-Nock carefully forms his lyrics so as to address his religious beliefs, but not immediately alienate those who don’t share them. The message of “Liberation” is that ‘Nock has survived through trials and tribulations – both in life and with his faith – and he is liberated now by his acceptance of his place both as a human and a musician. “Change”, on the other hand, takes a less evangelical route to suggest that with artists such as those on Much Luvv Records, a positive change for both the music and the art is on the way.

The further “AWEthentic” progresses, the clearer it becomes that yes, E-Nock has clearly relaxed the religious content of his verses but no, this doesn’t equate to a compromise of his messages. E-Nock weaves Christian themes in and out of lyrics which also echo more classic Hip Hop notions such as repping your crew, affirming your ability as a rapper, or simply having some fun. So E-Nock offers couplets like:

“They call me Fort Nock; no more sin bustin’ in
puttin’ a drought on the negativity that was floodin’ in”

And while the theological underpinnings are unmissable, ‘Nock is also stating that he’s tough enough to shrug off the dramas that come his way, and still put positive messages in his lyrics.

By the time “Truth Be Told” comes around, you can’t help but wonder when the debate about the morality of sexual relations is going to arise, and sure enough, it pops up in a verse on this track, although is considered at greater length on “Runnin'”. E-Nock introduces “Runnin'”, with its simple chord progression and neck-snapping beat, as his anthem for the Summer – a time when temptation is all around in the form of scantily-clad women. Whether or not it’s intentional, however, E-Nock’s verses on this song communicate a point of view that’s more chauvinistic than moralistic, as his message seems to be that women are evil temptresses who try to lead men astray. Obviously that’s a simplification, but instead of warning both men and women to beware of their own sexual urges (as you might have expected) ‘Nock’s lyrics undoubtedly lean more towards a warning about the inevitable, devilish advances of members of the opposite sex.

The album’s latter tracks continue to use the formula established by the first few and so, despite the fact that E-Nock very purposefully disguises the themes in his music with more conventional lyrics, those themes are ever-present and do become a little monotonous. The posse cut, “Next Up”, which features other Much Luvv artists CY, Tre 9 and Mark J only further illustrates this, as their varying flows complement each other and make one of the weaker beats on the album sound nicer, but ultimately, all the messages they offer are the same.

“Conference Skit” and “Who R U?” provide one last problem for “AWEthentic”. The skit discusses the merits of “rap ministry” (rap dialogue like that of religious ministers) but seems to conclude by mocking it as unsuccessful as both rap and religious dialogue. “Who R U?” then begins, and E-Nock assumes a confrontational tone to attack all those who would challenge or criticise the way he makes his music. The message to critics appears to be that his music is how God intended it to be, and so negative opinions of it are therefore unfounded. Following that outburst, the “Conference” returns with the speaker asking that E-Nock’s last verses be struck from the record on the grounds that Holy Hip Hoppers should never encourage negativity in their music.

All this simply leaves you wondering what point E-Nock was trying to make in the first place – if Holy Hip Hop artists should avoid ministerial preachiness, but are overstepping the mark if they express antagonistic opinions, then what exactly should they be doing? I suspect that what E-Nock means to suggest is that Holy Hip Hop shouldn’t be pigeonholed, and shouldn’t be bound by prescribed guidelines because its artists are as creatively free as any other musicians. Accepting that as the point, however, means that on “Who R U?”, while E-Nock may break the mould of the stereotypical Christian rapper (if there is such a thing), he assumes the dubious position of claiming moral superiority over those who don’t hold religion in as high esteem as him. For an album that began so positively, “AWEthentic” draws to a close with mixed messages which undermine its original promise.

As inevitable as the question of sexual morality, the album ends on a note of pious, grateful reflection. “Still Here” is laced like an R & B track, and E-Nock concludes that while he may have gone off the rails at different points in his life, it is by the grace of God that he is still here.

But for all the inevitabilities on this album, ‘Nock is definitely taking a step in the right direction if he wants to bridge the gap between Holy Hip Hop and what is simply Hip Hop. Next time around, ‘Nock and Much Luvv should build on this foundation to produce an album where not every track contains hidden or covert religious proclamations. For ‘Nock’s Hip Hop to lose its “Holy” quantifier, not only do people need to change their perceptions of what he is doing, but he also needs to accept that he can write tracks which have no religious underpinnings at all. And I’m certainly not suggesting that this should compromise his messages. The truth of the matter is that an album of tracks which all contain the same underlying idea is likely to end up putting off listeners. And that’s a shame, as a lot of the points made by artists like E-Nock are ones that should definitely be heard.