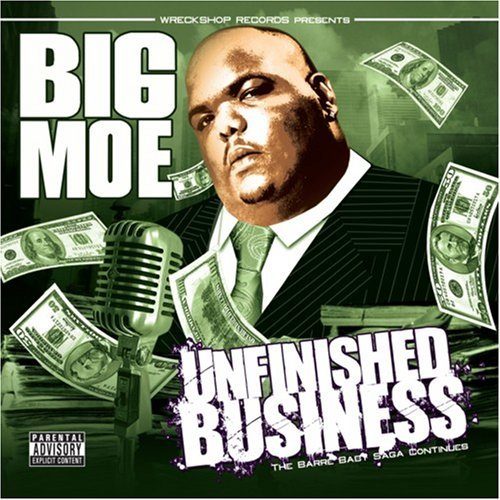 A way to remember those who have passed away in the music industry is through their artistry and talents. Koch Records and Wreckshop Records release a posthumous remembrance of unreleased material in the album “Unfinished Business” from the late artist Kenneth Moore, better known as Big Moe to his fans.

Beginning his career in Houston as a freestyle rapper for DJ Screw mixtapes and part of the collective Screwed Up Click, he was eventually signed to Wreckshop Records and released his debut solo album, “City of Syrup” in 2000 and later released his second album, “Purple World” in 2002.  Ironically, the underlying message to “City of Syrup” that exposed the ongoing Texas trend of drinking codeine-laced cough syrup is a supposed cause of Big Moe’s death.  After suffering a heart attack in 2007, Big Moe was in a coma and later passed away at the young age of 33.

At this height of his career, Big Moe was popular with Southern rap and continued to be dedicated to the state of Texas where he grew up and lived.  His fan base was always reminded of his Texan roots as Big Moe consistently sported his vivid purple hip hop clothing which was popular in Texas at that time.  While going to school at the University of Houston and earning a degree in political science, he one day had hopes of being in involved in politics, but instead, decided to stray away from the initial idea and turned to rap music.  Interestingly enough, with his background in political science, Big Moe was also known to be a large supporter of Barack Obama.  Obama has acknowledged Big Moe’s efforts in his involvement with the Houston area in terms of politics and social well-being.  With his passion for both politics and music, it is even said that Big Moe had possibly been working on a song for Obama’s 2008 campaign.

With an abundance of guest appearances from fellow members Lil’ Flip, Big Pokey, A-3 and C-Note of the Screwed Up Click collective and others, “Unfinished Business” is an album to not only recognize Big Moe’s unreleased tracks, but also a time for his cohorts to celebrate the life of Big Moe.

“Unfinished Business” begins with “Big M.O.E.” featuring Tyte Eyez and Dirty $ and is a slowed down track with a southern twist of twang and bass. It shows what is behind Big Moe and his crew as he remembers his partners who have passed as he says

“Ain’t shit changed, still sippin’ on a fo’
Gone for a minute but I’m here to let ’em know
The barre baby still on his grind
Platinum teeth so you know I’m gon’ shine
H – Town we put it down
I’m a stand up while ya boy lay down
Rep the Screwed Up Click, got the rocks up on my wrist
Dirt up in my pass, scratch them haters off my list (It’s Big M – O – E)
I’m throwed in the game
Big piece and chain and I’m holding wood grain
Candy paint dripping you can call it purple rain
Keep my head on it when I’m in the turning lane
Boys don’t test I’m on point with the aim
Like my dog Big Pokey I’m a pitt off the chain
Got on twenty – three’s so you know I jaywalk
Let the trunk bump, R.I.P. to Big Hawk”

As DJ Screw created the “chopped and screwed” style of slow southern beats to emulate the feeling and effects of being on codeine, Big Moe also followed this trend of music amongst other things. “Out of Line” which features Tyte Eyez, A-3, and Dirty $, illustrates the popular style of music with chimes and hard bass as they expose their audience to the codeine cough syrup while being aware of phony cough syrups apparently called “k-ro.”

With organs blaring, “Bigga Figga” features Big Poke and A-3 as Big Moe raps about the struggle to hustle in order to survive. He shows the difficulties in dealing with the realties of drugs and the pressures to earn more and more money. In a more upbeat fashion, “Grindin'” is a similar track that delves even deeper into the struggle as Big Moe sings, “If you’re looking for me I’ll be grinding. I got money on my mindâ€¦I’m grindin’.”

As “The Letter” exposes Big Moe’s first love of singing, he reverts to a more emotional and sensitive track to reveal his sentiment towards a certain woman. Big Moe sings about the struggles in his relationship as Toya is introduced as she sings about a letter she writes to him. With a fast beat and high pitched twang in “Do Anything” which features Tigga Man and NAC, Big Moe shows that he will do just about anything for his woman to keep her happy. Big Moe’s singing throughout the track adds to the concurrent theme of love and relationships as he shows his appreciation toward his loved one.

“Unfinished Business” takes the memory of Big Moe to another level as it incorporates what he once was and has become. With his unconventional style of both singing and rapping and fine line between mainstream and underground, Big Moe has succeeded during his short life span. Accomplished in so many ways through his education, artistry, and as one of the significant Texas based rappers to exceed expectations, he has built a name for himself. Although his tragic death is a loss especially in the Texas hip hop industry, Big Moe’s presence will always be felt and remembered through the legacy of his music.