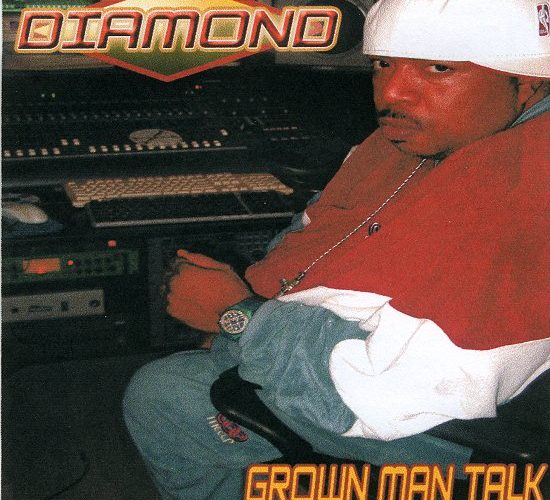 To set the record (and I do mean vinyl) straight right off the bat, big ups to Sandbox Automatic. While one can’t necessarily claim they have NOcomp in the world of indie distribution online, they’re certainly one of the oldest and the best. Almost any underground album you fiend for that you can’t find in stores, they will have in stock and ship to you promptly, plus throw in some bonus freebie stickers or posters to boot. DJ’s already know the site well, because for vinyl twelves the only way you could do better is peep a store like Biscuithead Records or Fat Beats in person. They set a high standard for excellence and usually exceed it. Therefore when I saw they were doing an exclusive release of Diamond’s new album “Grown Man Talk,” I just had to cop that joint.

Who is Diamond you ask? If you’re not already familiar with his work for Diggin’ in the Crates, a collective including everyone from the late great Big L to Fat Joe to Showbiz & A.G., that’s reason enough to get a late pass alone. It gets deeper than that though – Diamond shocked those who were already fans of his dope beats with his self-produced debut “Stunts, Blunts & Hip-Hop” in 1992. He dubbed himself rap’s “Best Kept Secret” on the lead single and lived up to it with a smooth flow and his pleasantly deep and mellow voice. Diamond left the mind-blowing techniques and world changing revolutionary lyrics to the other rappers he produced; on his album it was about enjoying the vices of life that the title professed. Over a decade later it still holds up under scrutiny, thanks to Diamond’s winning combo of suave rapping and hot beats. (In fact, it’s a candidate for a ‘Back to the Lab’ review down the road.)

As the 90’s wore on though, Diamond’s status slipped as new producers started to rise, and the quality of D.I.T.C. affiliated releases started to fall off. 1997’s “Hatred, Passion & Infidelity” attempted to reinvent his debut’s formula, but instead experienced sophomore slump and failed to impress his fans or his critics. Diamond faded further into the background after the long-awaited D.I.T.C. group album failed to generate big numbers, with the group members publically blaming Tommy Boy Records for trying to cash in on Big L’s death in 1999 instead of promoting and supporting it right. Diamond continued to work on the low though, providing beats as needed to rap artists and occasionally contributing a guest verse on the tracks or on hot remix joints.

Diamond’s reemergance just as 2003 closed gives him the chance to put his name back on the minds of hip-hop fans in 2004. This exclusive release features 17 tracks, all self-produced except for “U Gots 2 Go” by 88 Keys. Things start off nice after the intro with his song “Time Will Heal U.” Each set of bars is followed by a crooner singing the title, and the whole presentation feels like a Kanye West production. Actually, it may be that Kanye West productions feel like Diamond joints, ya heard? “Da Magnificent” hurts the good buzz of the hot start though by revisiting Missy’s “Sock it 2 Me” and not improving upon the original. Diamond’s rap is equally lackluster with lines like “On the beach sippin a bahama mama, favorite position is when I’m behind my mama.” Even verbiage that makes early Missy raps look like Pharoahe Monch by comparison could be forgiven, were it not for Diamond’s total lack of enthusiasm on the mic. He’s either incredibly bored, stoned out of his skull, or both.

The pace improves on the trio of songs that follow, thanks to guest raps by newcomers like Big C and veterans like Sadat X. Although “In Da BX” rips the same beat as the intro to “Make Room” by Tha Alkaholiks (one that’s been used a thousand times too many already), the song still wins thanks to Sadat. Clearly even after over a decade in rap he is a “Best Kept Secret” in his own right, both as a member of Brand Nubian and as a solo MC:

“Punk niggaz playin Eddie Vega, we came a long way since Sega
The X-Box to the hot blocks
With fists of fate, that damn near cremate
… Your metaphors is no better than your whores
You brings no pain, kicks down no doors
I’ll ride her on all fours, throw it way up in her jaws
If the telephone ring, don’t pause”

Diamond’s tracks vary from impressive in their simplicity; like the nearly off-key piano chords of “Why Yawl Hatin,” to old school nostalgia; like the fast paced horn stabs of “Watch Me,” to otherwise effective songs which lean too hard on beat concepts that have already been done like the eeriely familiar epic samples on “Put it Down.” It’s rather dissapointing to report though that beats are the sole element of this release to focus on. Diamond still has the right voice to rap over his tracks or anybody else’s, but even when he rips with energy like on “Live My Life” his words seem dated and out of context with his contemporaries. Anybody who believes raps like “tannin where the jet skis be, nobody God just my weezy, with my hand on my wee-wee” are fresh needs remedial rhyming 101. Guests like AK2000 and Blake Carrington try to provide support, but out of all the personnel only Sadat X and Brick Dawson take it to the next level. The latter really shines on “Don’t Mean Shit 2 Me” and could have been used more often throughout.

On the whole though, any Diamond album which isn’t going to feature cameos from D.I.T.C. rappers or other big names besides Sadat X has one strike against it from jump. Lord Finesse or KRS-One should be the type of guests Diamond pulls, especially with the hotness he provided for them over the years. At some point, it’s also hard to ignore the fact that Diamond beats don’t pack the powerful punch that they used to. It’s not that songs like “So Lovely” and “2 Late” aren’t well-produced, because Diamond is as professional behind the boards as they ever come. Rather D seems to suffer from what I’d like to coin “Large Professor Syndrome” – we’ll call it L.P.S. for short. On “1st Class” the Prof attempted to stage a hip-hop comeback, but fell flat by sounding out-of-date lyrically and musically. L.P.S. is what happens when a rapper or producer banks on the value of their name to sell records, as opposed to the quality of the material therein; but the comparison is even more apt here since like Extra P, Diamond is a self-produced artist.

Diamond commits the cardinal sin no one who calls themselves MC (true to the original meaning Master of Ceremonies) ever should – he’s BORING. Back in 1992 Diamond brashly proclaimed “I’m the best kept secret – so shut da fuck up and peep it!” There was no doubt it was true then, but nowadays the only secret is that Diamond obviously lost touch with his D.I.T.C. fam. Sharp swords often sharpen each other, and when you roll with rappers like A.G. and O.C. and producers like Showbiz and Buckwild, you only get sharper. D needs to reconnect with these heads before L.P.S. dulls his blade completely.