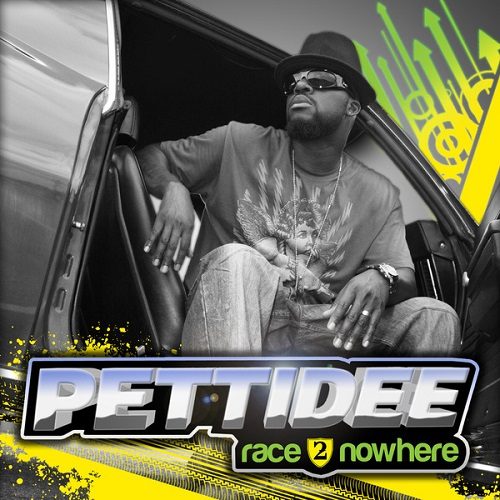 Florida’s Dewayne Petty, also known as Pettidee, isn’t a new face to the gospel hip hop industry. In fact, Pettidee is a veteran to the scene with more than ten years under his belt as he boasts Grammy and Stellar nominations to name a few. As both an artist and producer, he has gained fame in the Christian hip hop sector by working with various artists, starting his own record label, and self-producing his last four albums. Reflecting on his experiences as a father, husband, and artist, Pettidee takes this knowledge and translates it into music time and time again. Incorporating a new sound of the dirty south, hip hop, and rock or “Quad Rock” as he calls it, Pettidee maintains his Christian values and hip hop flair in his newest installation of “Race 2 Nowhere.”

Pettidee’s inspiration for “Race 2 Nowhere” is said to have come from newscasts as he attempts to incorporate what is pertinent in society into his music. After the “Race 2 Nowhere” intro, Pettidee dives into his personal struggles in “The Ghetto” as he explains the life he once lived and the difficulties of surviving amidst violence. Even with these roadblocks, Pettidee shows he was able to move past the troubled life with the help of his faith. Guitars and gun shots set the tone for “On the Run” featuring K.A.S. as he explains how people are influenced into violent acts due to either depression or the glorification of the “thug life.”

Pettidee sends out a positive message in “The Grind” as he explains his life on the straight and narrow because he needs to provide as a father. Organs blare in this upbeat track with female vocals as he says:

“Steady on the grind
Family got to get fed
I make cake out of doughboy, I got to get bread
I got to keep the lights on and roof over their head
And leave enough to live when I’m poof over dead…
Streets limited is
God give me the mind
To make a dollar out of dimes
I’m steady”

In a similar track, “Look Around” enforces the idea that people have to be more aware of the problems that surround them and remaining oblivious to problems in society only causes disillusionment as he says:

With this in mind, Pettidee stays true to his model of societal issues for the most part, but tends to stray away at times as he reverts back to the “typical” hip hop album boasting money and cars. “Hydro” is a commercial sounding track worthy of the club scene while the repetitious “My Trunk Bangin'” featuring Ras shows how fly his car is.

Although Pettidee instills positive messages and awareness, his beats lack a modern feel as some tracks sound dated. The use of the vocoder in “Look Around” was unnecessary as I actually appreciated the untainted vocals and lyrics in the track. Pettidee is convinced that “Quad Rock” is the new sound of 2010. However, it’s a sound that has been heard over and over again. Rock and hip hop have survived for many years together and adding a southern flair doesn’t add much to it at the end of the day. However, Pettidee’s intentions as a Christian rapper are spot on. He remains optimistic and enlightens his audience on issues revolving within society while retaining his southern panache. As a veteran in the hip hop scene, it is clear that Pettidee is a seasoned rapper and “Race 2 Nowhere” is a prime example of his capability as an artist and believer of his faith.