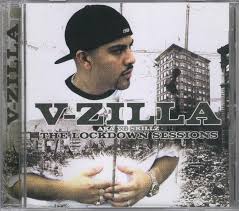 V-Zilla’s bio on his official website (www.vzilla.com) states that he is “best described as the underdog.” With his track record, though, it’d seem like now is his time to shine. After having two albumsâ€”2000’s “W.I.S.D.O.M.” and 2002’s “E.X.H.A.L.E.”â€”under the name VG Skillz, and two years of opening for or performing with underground mainstays like Atmosphere and Jedi Mind Tricks, one would think that the Houston native would eventually get his own time in the underground spotlight. This time around, though, he isn’t taking any chances; claiming he’s revamped everything in his camp, V-Zilla comes new name in tow with his third album, “The Lockdown Sessions.” Though the album’s intro is somewhat clichÃ©d (V-Zilla is sentenced to life in prison for “attempted musical murder”), the disc starts off on the right foot with “Lockdown Pt. 1.” Over haunting piano keys and guitar riffs courtesy of producer Moonshine, Zilla describes his experience with the music industry:

“I don’t got money for that Neptunes production, yo
I’m not a gimmick rapper, not how I function yo
See I don’t wanna be that cat that fades in the dark
I’m not a follower, I wanna be state-of-the-art”

Moonshine and V-Zilla have incredible chemistry. Moonshine produces the entire album save for two songs, and it seems like all of his dark beats fit Zilla’s gravely voice like a glove. Whether it’s the dramatic pianos on “All I Know,” the battle-ready “Classic,” or the funky guitar plucks on “Z.I.L.L.A.,” it’s clear that Zilla’s battle raps and Moonshine’s beats are a great tag team. Zilla can do more than battle rap though. He shows storytelling ability on “The Almighty,” on which he speaks about a friend of his that’s enduring an abusive relationship. “Unfaithful” would be a typical “pussy kills” tale if it wasn’t for Zilla’s crystal-clear imagery and an effective dramatic backdrop by producer Rez, and he gives a sappy verse each to a woman, hip-hop, and God in the sample-heavy “Leave You:”

“I know lovin me ain’t easy
probably the hardest that you’ve ever
had to do, but it had to be me and you
a love story, ghetto Romeo and Juliet
the silhouette of your body is so hard to forget”

While Zilla shows the ability to speak on given topics, he’s still at his best when just spitting natural braggadocios verses. Zilla has an uncanny ability to hold a beat, and the album’s highlights come when the beats accentuate his delivery. “Under the Gun” steady beat does a great job of playing up Zilla’s catchy flow, and he sounds good to the Caribbean vibes of “Imagine That” as well. He teams up with K-Otix for the gem of the disc, the stellar “Lockdown Pt. 2.” Listing quotables might spoil it a bit, so just check the song out for yourself.

As a whole, “The Lockdown Sessions” is a good album. While the disc may not be fairly balanced in terms of an equal quantity of deeper songs and normal battle tracks, this album does a great job of putting V-Zilla’s talents to use. With a good abundance of songs that highlight his delivery, and a few deeper songs to add substance, V-Zilla has put together a quality independent album that’s worth a listen.