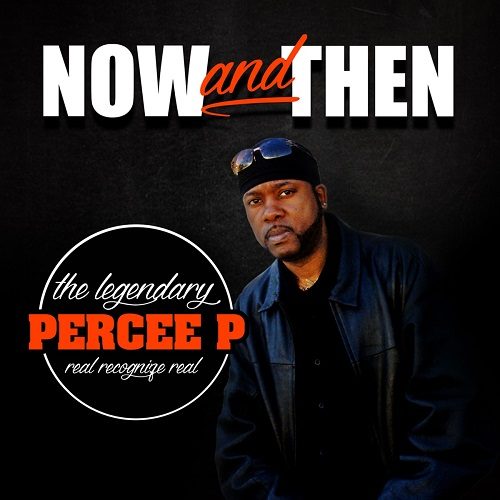 Percee P :: Now and Then

If you’ve ever been in or around the New York branch of Fat Beats, you probably already own this record, having purchased it from a questionably dressed, mush-mouthed hustler whose modus operandi revolves around assaulting Fat Beats clientele with this record, a collection of Percee’s finest recorded moments over the past decade or so. While his tireless hustle is certainly commendable, his eccentric ways have become the stuff of legend- this dude tried to sell me the same bootleg twice in the span of an hour, once when I entered Fat Beats, a second time when I was making my way out for some falafel. Each time I was fed a seemingly unending spiel about how he was, and is, one of the illest dudes to ever clutch a mic device, a fact seemingly justified by the photo albums he had handy, packed with immortalized moments of him rocking stages with various underground luminaries. As much as you’d love to dismiss his grandiose rants as the delusions of some drug-addled b-boy who’s past his prime, one listen to this bootleg will show you how foolish such an assumption would be.

To be perfectly frank, Percee P is one of the most technical artists to ever grace a cipher, a fact that he proves with ease on this compilation, one which collects tracks and guestshots that span his lengthy career. Imagine, if you will, a cross between the fluid but unerringly complex, labyrinthine structures of Kane, the acerbic wit of Lord Finesse and the meticulously arranged, rapid-fire cadence of Kool G Rap, and you have somewhat of an idea of the prowess that Percee wields. Internal rhyming, multi-syllabic flows, Percee P has been doing it with the very best of them from the genesis of his career, and to his credit his unrelenting delivery and otherworldly breath control still command reverence today, as evidenced by his newly inked deal with underground institution Stones Throw Records.

The mere fact that this compilation spans so many eras in hip-hop’s notoriously attention- deficient history means that many great sounds are represented here- opener “Skills Mastered” is a classic hardcore battle track that sounds completely ’97-’99, “Coward Of The Year”, featuring Aesop Rock, is vintage subterranean rap pre Def Jux, “Respect Cost More Than Money” is SUBLIME Juice Crew/BDP era funk, “Don’t Come Strapped” has a lazy standup bassline that recalls the Native Tongues/Digable Planets/Gang Starr era at its apex. The staggering thing, though, is though the sounds portrayed on this disc tend to be vastly different from track to track, Percee’s flow remains vehemently uniform- dude has been peddling his uncompromisingly breakneck delivery from day one, and as evidenced by his guestshots on the new J5 and Jaylib records, it remains untampered by the countless transient trends that have surfaced in recent history.

To be honest, Percee insistence on adhering to the same flow is both his gift and curse- while such determination can certainly be commended in a musical terrain dictated by tenuous fads, Percee is often stifled by his crudely methodical, rigorously structured cadence. This is the same fault that affects emcees like Black Thought and Kool G Rap, who find themselves so imprisoned within their metrically precise structures that they cannot stray into more obtuse and artistically intriguing territory. As a result, Percee’s flow gets rather stale after extended listening, something that is further accentuated by his rather drab lyrical content- dude doesn’t appear to enjoy rhyming about anything other than, well, rhyming. A classic East Coast battle rapper, Percee has crafted a legacy out of bloodthirsty braggadocio, and not once on this record does he tackle more personal, topical material. To be fair, many of the tracks on offer here are battle-oriented cipher cuts with other emcees, but in reality I have yet to hear him release thematic tracks since the release of this bootleg.

That is, of course, not to take anything away from Percee’s remarkable talent as an emcee. He has proven, over the course of a long and storied career, just how devastatingly intricate his delivery can be. Yet, the fact that the bulk of these tracks only feature a 16 bar from Percee speaks volumes about him- he is best suited to delivering his staggeringly breathy verses in short, sporadic bursts, for his clinically uniform style can get incredibly tedious after a while. Still, this is an essential compendium that contains a host of CLASSIC tracks (“Yes You May”, “Lung Collapsing Lyrics”, “Coward Of The Year”) and displays one of the most underrated mic handlers in the history of rap music. At worst, this record still functions as a fascinating journey across rap’s various musical plateaus over the past decade. Make your way to Fat Beats now.