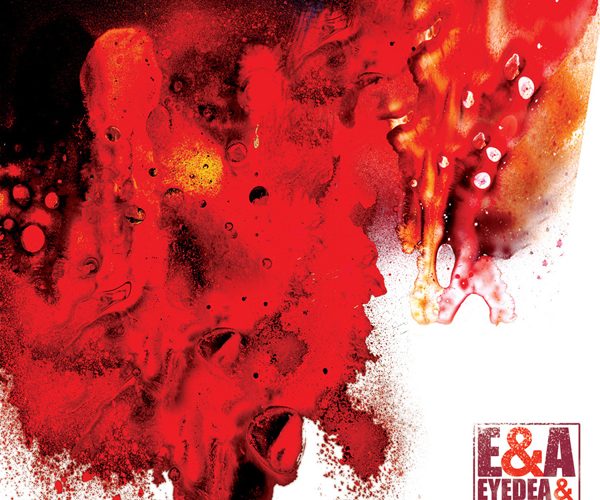 A simple description of Eyedea would be “the thinking man’s Eminem.” In fact, it’s remarkable how much the two have in common besides melanin. Both are known for vicious freestyle skills, both have been finalists in the Cincinatti hip-hop showcase Scribble Jam, and both cultivated a devoted following in the underground based on a style and flair beyond the ordinary. The two clearly branched off in different directions though. Eminem blew up on the strength of his sick humor, linked up with Dr. Dre and signed to Aftermath, and became both a household name and public enemy #1 to all whack rappers of melanin that can’t stand a white boy being that damn good when they spend years upon years trying and still stink up hip-hop (see Benzino). Meanwhile Eyedea continued winning events like the Blaze MC Battle (broadcast on HBO) and releasing underground albums like “First Born” with his partner in crimes DJ Abilities. The latter is no slouch either – a two time regional DMC champion, one of the top vinyl cutters in all of hip-hop, and a maestro of fine beat production.

The question is certainly the same to reader and writer alike – why have two talents of such magnitude seperately failed to blow up paired together? The reasons are simultaneously both obvious and hard to fathom. Eyedea purposefully cultivates an attitude reminiscent of early El-P/Company Flow material – “independent as fuck and proud of it.” As a member of the infamous Rhymesayers family, he can afford to be. The iconic underground status of the crew combined with his own legerdemain ensure for the time being and near future a level of indie underground success that sustains his career. But quixotically, it’s this very attitude that may prevent Eyedea from reaching out to a larger audience. It’s a shame too, because those masses don’t realize Eyedea is just as humerous on the mic and swift with his flow as Em is. The new album “E&E” is out to prove that, and songs like the witty “Act Right” succeed at it:

“(Hey LADIES!) You know we love to see y’all at the shows
But this is dedicated to the ones someone might call a {*HO!!*}
All I gotta do is wink to get you back to my hotel
I can’t respect a person that don’t respect themselves
You’re that one girl I went to high school with (with)
Back then you treated me like I wasn’t shit
You say if I give you a free CD, you’ll show me your tits?
You get the CD for ten bucks like everyone else, you stupid {BITCH!}
{No} – I don’t care if you just broke up witcha boyfriend
{No} – I ain’t tryin to go where every other rapper’s been!
{No} – If I was to kick it all my boys would clown so I could
{“Never hold ya, can’t hold ya, won’t hold ya down” – J-RO}”

“Tryin to turn into a simple simile, a simple sentiment adrenaline is coming back
I made it my own city, why’s it gotta be a superstar
I’d rather be a galaxy, but how you see is so dependent
on the medicine the rhetoric and how inventive any second
that your thinkin is, I’m sittin at the brink of this
world is all asleep and I have no apologies
I breathe… keep my side on what we ride on
Let bygones be bygones, the migraines don’t sidetrack my final
destination of them rivals, predetermination
To exterminate the germination
Of a nation that ac-cepts,anything that’s thrown in their fat face
Cause when there’s nothing – left, there’s no point to the rat race”

Aceyalone? Gift of Gab? Pharoahe Monch? Each would be fair comparisons to Eyedea, truly a verbal pugilist extrordinaire. Showing a higher level of concentration on and concern for accessible dopeness than on their debut album, Eyedea & Abilities craft an album full of songs that can break past their cult icon status to a broader underground rap audience. The uptempo and bouncy “Kept” is all that. “Exhausted Love” talks honestly about failed dreams traded in for the menial day to day grind. “Star Destroyer” starts with a hot Xzibit sample scratched in by Abilities and only gets better as Eyedea lambasts inferior competitors. The smooth sounds of “Paradise” have that surprising pop crossover previously only heard in certain Quannum artist joints by DJ Shadow and Latyrx. “One Twenty” is a purely menacing attack of pianoes, freestyles, and sweet DJ Abilities cutting. The only track that might lose people is the industrial noise of “Man vs. Ape,” but to this reviewer it was a refreshing change of pace.

When the ominous sounding “Glass” shatters it’s way across your eardrums at the end and three-quarters of an hour have gone by, “E&A” turns out to be one hell of a great experience. Maybe the theory that there’s only room for so many white rappers to crossover and blow up in hip-hop is true, and it just happened that Eminem got the slot and Eyedea got nada. That can’t be true though, because back in the days the Beastie Boys, 3rd Bass and (ugh) Vanilla Ice were all hot at the same time, and today there are more people of ALL diverse colors and backgrounds making great music that’s true to the hip-hop art and culture. So why won’t Eyedea & Abilities shine brighter? Because for better or worse, they’ve been pigeonholed in the “college alternative” hip-hop category where it’s great to be on mix shows and mix tapes but you’ll never go any further without somebody paying for a top 40 radio push and greasing the palms of a Viacom executive to get your video played on BET and MTV. There’s one thing Eminem got by signing with Dr. Dre that Eyedea did not – connections. Connections get that ass stuck like glue, and after a decade of both making hits and being in them, Dr. Dre had a LOT of connections. Hopefully Eyedea & Abilities can land just such a connection one day and convince the naysayers and pale-skin haters that they’ve got the right stuff, but there’s no reason to deny yourself a copy of “E&A” in the interim.