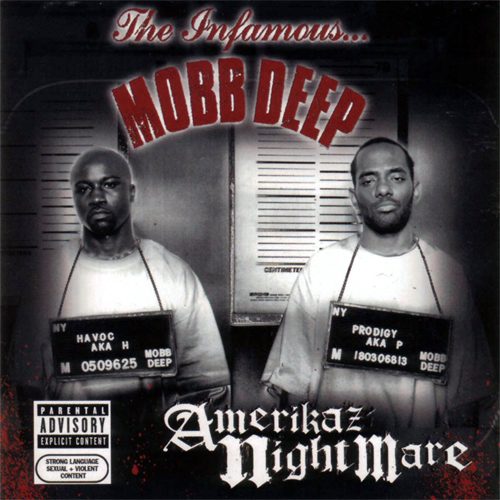 You couldn’t possibly find more Bias if my name was Len. This reviewer is personally as big a fan of Mobb Deep as they come. Ever since the duo ushered in an new era of hip-hop sound with “The Infamous,” a sound which Prodigy himself describes as “heavy metal for the black people,” the rap game hasn’t been the same. Havoc’s rhymes are both grimy and beautiful, a dark urban landscape through which he occasionally allows in a ray of sunshine. Prodigy raps as though every minute might be his last, which to some degree is actual fact given his struggle with sickle cell anemia. And of course even though he’s not officially in the group Alchemist has subbed in at times for Havoc on the boards, so let’s give both of them the credit they are due for making so many audio masterpieces over the years. Together Mobb Deep flip verbals that read in print like a Mario Puzo novel and sound on wax like the narrative to “Scarface.”

After shocking fans by declaring themselves “Free Agents” in 2003 and releasing said same album on Koch/Landspeed, Mobb Deep is back with a vengeance and a new record deal. If you ask Havoc though, it ain’t no thang. “I’m tryin to rip Britney, so I made Jive sign me.” That quip can be found in their first single “Got it Twisted,” which once again finds Mobb Deep not only setting trends but being ahead of them. If you’ve been watching “I Love the 80’s” or if you’re over the age of 28 the beat on this track will make you smile like Snoop Dogg at a pot rally. If you don’t know it though, look up “She Blinded Me With Science” by Thomas Dolby sometime. It’s surprising nobody in hip-hop thought of this one before, given that the brooding synthesizers and puncy beat sound tailor made for rap, but Mobb Deep have set a standard in it’s use that P. Diddy will now never be able to usurp. Both MC’s shine, but you gotta give it up for Prodigy:

“QB drop you off of that bridge
Show you how we do it in Queens where murder ain’t shit, nigga
This is P talkin, show you where I live
You can come right to my crib and get it for shiz
It be a manslaughter, right in front of my kids
A little blood get on my daughter, it’s nothin, she’ll live
Got cops shook to death of us… we don’t like D’s
You never catch us runnin with the police
Y’all niggaz, get y’all vest-es up
And y’all better invest, in some real heavy bullet-proof paneling”

There are songs on here so thorough and ill they’ll send a chill down your spine and raise the hair on your neck. Even when they use a beautiful sample like Jean Plum singing “Here I Go Again,” it’s like putting Kanye West and RZA in a blender and putting it on the puree setting. The mixture is smooth, but it’s still going to come out a lot darker than Kanye alone would be. On “Win or Lose” that’s precisely what you get, thanks to Alchemist’s presence punching buttons to make the aforementioned mix. Here’s a little taste of what the duo does with it:

Havoc: “Y’all like bitches – the chit-chatterin
Stay not likin a nigga but givin dap to him
Hav’ don’t change for no chick, and they adapt to him
Never get cool with you niggaz, I end up clappin ’em”

Prodigy: “Aiyyo – federal note fetish, you fuck with my niggaz
Franklin and Grant, get yo’ ass blammed with the quickness
Y’all niggaz is finished
You overdosin the world with that cute shit
It’s time for this realness”

For those who think they’ve got Mobb Deep’s sound all but figured out by now, “Amerikaz Nightmare” has more surprises in store. Havoc’s beat on “Dump” sounds like Timbaland on a sizzurp bender – slow, low, and hard. Nate Dogg’s guest vocals make it even MORE smoked out. Then there’s the bugged out “When U Hear The” cut, where Alchemist and Mobb Deep seem to be one-upping each other on who can come iller. “Real Niggaz” is a complete swerve, thanks to a Red Spyda beat and a sing-song chorus that seems deceptively radio friendly, but still bangs harder than concrete. Speaking of surprises, Lil Jon pops up for a beat and a cameo on the song “Real Gangstas” – and on this one I confess I’m a little indifferent since nearly every song on the radio any more has a Lil Jon beat (in other words the shit’s getting old) but it’s still cool. Things get back to the hardness on “One of Ours Part II” thanks to Havoc’s beat and a guest verse from Jadakiss:

“My niggaz they can’t stop us
Ev’rysince we got our hands on the AR’s, the S, and the fresh choppers
All of them is filled to the top with the vest poppers
We can get it on with America’s Best Coppers
Soon as the lead pop you, whoever don’t make it
to the funeral or wake can catch you on Ted Koppel
I’m a rare thumper, you just a gay nigga
with a rainbow sticker on your rear bumper”

The final third of the album keeps the pace up nicely with the ominous “Throw Your Hands,” and surprisingly this one IS a Kanye West beat. It’s followed by the posse collabo’ “Get Me” featuring Littles and Noyd, the fast paced Havoc production “We Up,” the jazzy anthem of realness “Neva Change” and a bonus “Got it Twisted” remix featuring (of course) Twista. At some point it becomes hard to distinguish whether their art imitates life or vice versa, although it can certainly be said other artists in rap try to imitate THEM. You can’t improve on the original with a copy though, so the best bet for all concerned is to not even try. Imitation may be the sincerest form of flattery but only Mobb Deep comes with the pure uncut. Their music may be “Amerikaz Nightmare” to some, but to their fans it’s that real shit.