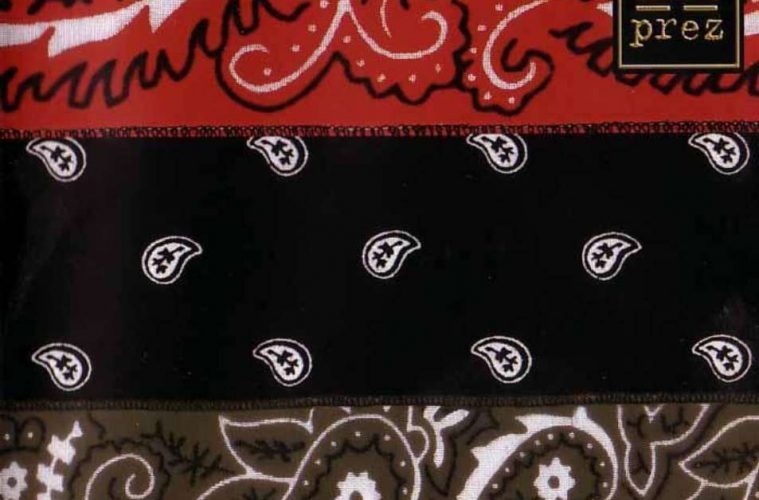 Dead Prez has always enjoyed toying with the duality of their name. On one level, “Dead Presidents” are what every materialistic minded entertainer is trying to collect – green bills with faces like Abraham Lincoln’s. It’s a somewhat ironic nickname when you consider that Mr. “It’s All About the Benjamins” Franklin is on the $100 bill, possibly the most popular of all, when he was never a President dead OR otherwise. And that’s the flipside of their name, actually. As a militant hip-hop group the likes of which has not been seen since Public Enemy’s heyday, one gets the distinct feeling listening to them that they’d happily DEAD a few Presidents to advance social revolution. One certainly wouldn’t ask them for their opinion of George Dubya.

On their new album, Dead Prez are content to flex that duality again in a variety of ways. At it’s most basic, the initials of “Revolutionary But Gangsta” spell out RBG, which they freely re-interpret into multiple meanings. Red black and green. Real black girls. Et cetera. On another level they’re not afraid to use traditionally non-revolutionary (and some would argue mind-numbing and pacifying) forms of communication like radio and television. You remember what Gil Scott-Heron said? “The Revolution Will Not Be Televised.” It seems that M1 and stic.man are out to prove him wrong. In some ways it’s rather insidious – Dave Chappelle uses the instrumental to their song “Hip-Hop” from the “Let’s Get Free” album in the opening of his show. On this album though it’s far more obvious. Their first single “Hell Yeah” has already gotten some major rotation after first appearing on the soundtrack for the film “2 Fast 2 Furious.” It’s got some slick music and a catchy chorus, yet it advocates some serious civil disobedience:

“Every job I ever had I had to get on the first day
I find out how to pimp on the system
Two steps ahead of the manager
Getting over on the regular tax free money out the register
And when I’m workin late nights stockin boxes
I’m creepin they merchandise
And don’t put me on dishes, I’m droppin them bitches
And takin all day long to mop the kitchen
Shit – we ain’t gettin paid commission, minimum wage
Modern day slave conditions got me flippin burgers with no power
And can’t even buy one off what I make in an hour
I’m not the one to kiss ass for the top position
I take mine off the top like a politician
Where I’m from doin dirt is a part of livin
I got mouths to feed dawg, I got to get it”

It’s not necessarily easy to pick up that this is revolutionary, since to the casual glance it might seem like a simple case of “ends justifying the means” for criminals on the come-up. If you read between the lines though, it’s a power struggle between the disenfranchised poor and the wealthy elite class and their “let them eat cake” attitude. If the modern history of the world from France to the United States to Haiti and beyond have taught us anything it’s that every society is three meals away from a revolution. People who don’t have the right to vote but are well fed won’t complain much, but people who are starvin’ like Marvin have nothing to lose by rioting, looting, and generally upheaving any establishment within arm’s or a gun’s reach. But just when you think you’ve got Dead Prez figured out, here comes the wealthy corporate champion, self-made millionaire Shawn ‘Jay-Z’ Carter on the remix. Uh-ohh!

“As long as there’s… drugs to be sold
I ain’t waitin for the system to plug up these holes
I ain’t slippin through the cracks
So I’m in Portland, Oregon tryin to slip through these raps
The first black in the suburbs
You’d think I had ecstasy, percocet, and plus syrup
The way the cops converged, they fucked up my swerve
The first young buck that I served
I thought back to the block
I never seen a cop when I was out there, they never came out there
And out there, I was slingin crack to live
I’m only slingin raps to your kids
I’m only tryin to show you how black niggaz live
But you don’t want your little ones actin like this
Little Amy told Becky, Becky told Jenny
And now they all know the skinny
Little Joey got his doo-rag on
Drivin down the street blasting Tupac’s song (thug life BAY-BEE)”

Hold up – is Jay-Z advocating a revolution too? Of course he is. Jigga has always been unfairly knocked as being a career flosser, and to be fair to his critics he does sometimes flash his wealth in excess amounts. That being said Jay has always been a solid rapper not only on the pen but on the mic with songs that portray a deep understanding of his roots in black poverty, hailing from the Marcy Projects. In some ways though Hova’s revolution is even more insidious than Dead Prez. He doesn’t just want to disenfranchise the elite, he wants to convert today’s youth into the hip-hop revolutionaries of tomorrow, regardless of their race color or creed. Imagine the Black Panthers uniting with the hippies and taking over shit. Unreal? See if rappers like Nas, Jigga, Chuck D and the DP’z can’t bring all the different hip-hop factions together under one tent. It could happen. Can you dig it? CAN, YOU, DIG IT?

Back on point – the message doesn’t mean much if the music that delivers it isn’t going to get it across. The album is short at twelve tracks and 45 minutes (that’s including dead air and bonus material tacked onto the unlisted tracks 13-21), but it packs a solid punch in the interim. The thuggish ruggish flow of “Walk Like a Warrior” featuring Krayzie Bone will get you bobbin’. “Radio Freq” pumps the funk but at the same time proudly proclaims itself “so real that the radio’ll never play it.” Dead Prez meets the Dirty South on “50 in the Clip,” and you know they ain’t filing no tax returns on the smooth-ass flow of “W-4”:

“What a nigga gonna eat when the refrigerator empty?
Work all week let the bossman pimp me?
Can’t pay no rent till the 15th
Landlord call the police to evict me
Lookin for a job in the want ads
Have you ever been to jail? Know they gone ask
Ever took a piss test that you didn’t pass?
In between jobs in the past? How you get cash?
I done worked over hot ass stoves
I done picked up trash off roads
Winter time in the streets and the cold
Many times had to sleep in my clothes on the flo’
What you know bout bein’ po’ seein’ most of yo kinfolk be on dope?
Ain’t nobody in the hood got no hope in this fucked up system
and that’s why we don’t vote
Still payin niggaz 4.25 – how the fuck we supposed to survive?”

For the most part it’s highly-effective, although the self-produced tracks by Stic do tend at times to sound somewhat muted. In fact compared to their previous work, it seems the message is just as revolutionary but the beats just don’t have that cutting edge “Mind Sex” or “Coming of Age” quality earlier songs did. It’s not that Stic is a bad producer, just that something a little more bold and/or fiery musically would give that much more edge to the social stance and political view that they advocate. It’s a little bit like listening to Ralph Nader on a broken TV when you’re half-drunk – the voice sounds okay, but it’s getting distorted and you can’t focus on it clearly enough to get the point. There’s no denying that Dead Prez are in fact “Revolutionary But Gangsta,” but oddly enough it would have worked even better with just a little mo’ gangsta in it. For fans of the group and of socially conscious rap, it’s still a must have.