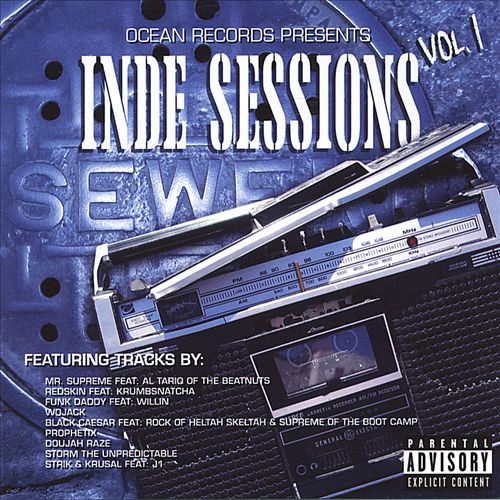 Approaching one of these compilations is always an interesting prospect: the usual story is that a little-known record label enlists the help of a few recognisable names from the underground scene, pairs them with a roster of as-yet-unestablished Hip Hoppers and then attempts to claim for itself a personality or signature from the resulting output. Almost by definition, this kind of undertaking is a mixed bag of failure and success, as some of the compiled tracks do nothing more than rehash old ideas in uninspiring fashion while others outshine the project entirely, putting the lesser tracks further to shame.

And so it is with Ocean Records’ “Inde Sessions Vol. 1”. Sort of.

Actually, Ocean Records has now been around for a number of years, and its signature or personality is defined less by the music they compile, and more by the fact that they put the compilations out at all. The Northwest-based miniature label has been putting out music for more than a minute now, using its connections with those “recognisable names from the underground scene” to direct attention towards the unsigned, “as-yet-unestablished Hip Hoppers” whose music they press up and distribute.

But that’s enough background to keep us going, as the real focus here should be the music of those artists lucky enough to find themselves a place among these “Sessions”. And â€“ true to compilation form â€“ the quality of that music varies greatly.

Of the better-known artists who contribute to the “Sessions”, all turn in respectable efforts. Jon Doe offers production on Prophetix’ “True Urban Grit” which may not quite equal past Prophetix highlights, or the majority of the production from his own “Meet Jon Doe”, but nonetheless serves its purpose as a decent underlining for the Atlantan lyricists. In a similar vein, Rock (of Heltah Skeltah) and Supreme (of Boot Camp Clik) join forces with Black Caesar to deliver “Set Trip” â€“ a track that wouldn’t rival the best of their respective works but still bumps in all the right places and sets the bar high for those younger cats trying to make a name for themselves here

Of those younger cats, it’s arguably Storm the Unpredictable who most convincingly steals the limelight. On a compilation which, despite the Northwestern home of the label behind it and the varied geographies of the different artists featured, seems to sound continuously reminiscent of mid-90s West Coast rap, Storm’s “Contradictions”, led by a Spanish-tinged trumpet and accompanied by a similarly Hispanic piano and guitar can’t help but stand out. But it’s the Unpredictable one’s subject matter and the character with which he crafts his verses that really make this track a cut above the rest. Where others of these “Inde Sessions” seek only to retread familiar Hip Hop territory, “Contradictions” explores the self-contradictory nature of elements of the music, and some of the questionable life choices which run parallel with it:

“And furthermore, why my people use the “N-word” e’ry day, e’ry night;
Another race use the word, oh, now you wanna fight?
Some conscious brothers walk around all the time like ‘Peace Queen!’
Then they dog a queen out when the queen ain’t on the scene
[…]
Oh you want a real man with real love to share
And you got fake nails fake eyes and fake hair?
Did we really learn the lessons that we got from Big and ‘Pac
When every other rap record somebody gotta get shot?”

Regrettably though, for all that Ocean Records have presented us with a number of “Sessions” of this calibre, as well as others which are on a similar level â€“ Doujah Raze’s “Irish Cream” and Nokturnal’s/Li Fee’s “Seattle Holla” deserve an honourable mention â€“ there are always examples of tracks which would have been better left alone. “So Freaky” by Strik & Krusal featuring J1 comes dangerously close to being one of these as it makes use of a derivative Eastern-laced R&B track to support it’s highly unoriginal lyrics about getting freaky. Knowa Lazarus’ “My Vida”, Mr Dog’s “Get It Craccin” (featuring Mac Money and Young Have Not) and the strangely-named Skuntdunanna’s “All I Got” (featuring Wanz) don’t offend in quite the same way, but are all fairly uninteresting listens, especially in the context of the compilation’s better moments.

Among the artists I haven’t yet mentioned, Mz. Tasti rolls nicely over some low-toned keyboard chords to bring a track that’s an affront to women who step to her, and Bill Yuns (with the help of Mycle) provides “Bread and Meat”, which manages to sound like a merging of Californian funk and Southern syncopation despite his Seattle origins.

What all of this adds up to is that â€“ while Ocean Records may not be one of those fledgling labels struggling to find an identity â€“ in practice, their compilations take on a form comparable to the mixed bag such labels usually present. There are about five or six artists on “Inde Sessions” which will inspire the listener to research them further and find other tracks they’ve had a hand in, but some others on the compilation might need to go back to the drawing board, or simply step things up a level, if they really intend to one day become a “recognisable name from the underground scene” themselves.