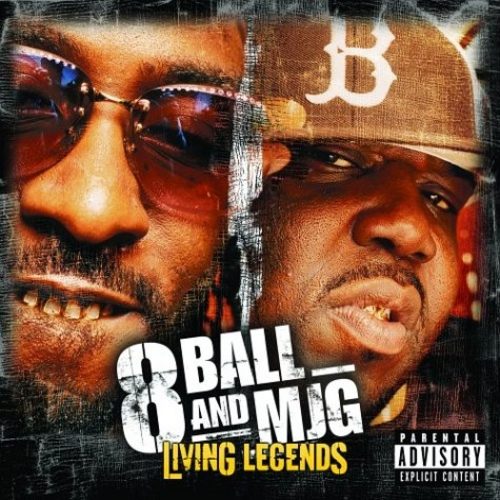 When you give somebody the title “living legend” you’d better not do it lightly. It doesn’t matter whether they are a comedian, painter, pro wrestler or rapper – it’s the kind of title that if not one HUNDRED percent accurate will be held up to scrutiny and publically ridiculed. As much as many of the aforementioned parties might like to do it, “living legend” is not a title you can give YOURSELF with any credibility. It’s a title that you earn from the utmost respect of your peers in the field, and your fans in the public. When both groups agree that you’re one of the greatest of all time, and your name hasn’t already appeared on a headstone, then and only then is it possible you MIGHT be considered a “living legend.”

Now that being said, calling 8 Ball (formerly Eightball) & MJG’s new album “Living Legends” did not cause this reviewer one moment of pause. Although their reputation may not be as well known outside the Dirty South as it SHOULD be, they’ve certainly compiled together an impressive career that spans well over a decade. Collaborating together since their childhood, this rap duo has a natural chemistry not unlike Run and D.M.C., and not unlike Plugs One and Two. Although each has dabbled in solo careers in recent years, it’s only when they work as a team that their true talents shine through. From their national debut in 1993 on “Comin’ Out Hard,” to their slept on 2000 relaese “Space Age 4 Eva,” this tandem could arguably be said to not only be the best rappers that Memphis, Tennessee ever produced, but at the very top echelon of both Southern AND national hip-hop.

After a few years away, fans of this group may have thought that they had finally given up trying to get the props and recognition they deserved all this time. Their surprising return with “Living Legends” is making a statement, with both the album’s title and their even MORE surprising new partner in crime – Bad Boy Records. The heavily East coast oriented label, best known for being the former home of Biggie Smalls and being founded by perennial trouble-maker-and-finder Sean ‘P. Diddy’ Combs, has suddenly and without warning scooped up a great Southern rap duo and made them part of the fold. For a little perspective, it would be no different from hearing that Public Enemy had signed a deal with Dogg Pound Recordz. It’s THATunexpected. Not wasting any time, the label quickly released the first single “You Don’t Want Drama” to reintroduce the Tennessee team to a national scene:

8 Ball: “Straight from the underground, fat boy from the Mound
Spit it how I live it, keep it gutter, that’s how we get down
I wanna see you get it crunk, let a nigga know what hood you from
Eveybody wit me drunk as fuck, break it down, then roll it up
Back it up, a girl like you, a nigga like me can’t pass it up
Rollin by, lookin good, put it in reverse then back it up
What’s the deal, lemme make it clear what you got right here
They break mold, one of a kind, fat boy witta gold mouth that shine”

MJG: “MJG is the reason yo season needed seasonal spices
They needed more life and lucky yo wife was bleedin
Now your life is leavin yo body, for drinkin too much Bacardi
You should’ve known when you started, never fuck with G and E
In any climate I’m shinin, floss, I’m perfect wit timin
I’m good for rippin and rhymin in and out the beat
And Eightball is loadin the clip, for niggaz supposin to trip
And you know I’m rollin the whip, we finna set ’em free”

The risk with putting any Southern artist or group on an East coast label is that you divorce them from the “low down and dirty” style of music production that makes hip-hop from the South so distinct and refreshing. You can’t make it too clean, you can’t take all the bass and bounce out, and it has to be CRUNK. Fortunately even with a selection of Bad Boy’s best producers on the case, they’ve kept the sound surprisingly authentic. Nashiem Myrick’s beat for “We Do It” sounds like a true “Space Age” classic. Deric ‘D-Dot’ Angelettie’s “Gangsta” may be one of the hardest cuts these two have ever rapped over. And even when Yogi and Stevie J combine for a song like “When It’s On” featuring P. Diddy, the pianoes sound appropriately menacing and perfectly matched to the slower flowing style of these Southern pioneers.

It would have been easy for this release to get fucked up in any one of a hundred ways. Thankfully it appears to have been well thought out by all of the parties involved. 8 Ball & MJG stay true to their Southern roots by collaborating with artists like Bun B on “The Streets” and Ludacris on “Shot Off.” Even the songs with crossover potential like “Trying to Get at You” featuring 112 and “Look at the Grillz” featuring T.I. and Twista don’t sound hackneyed or phony, since 8 still raps with his classic deep fat vocals and narrative wit, while MJG is the Parrish Smith to his Erick Sermon with a higher pitched, gravelly voice and powerful delivery. While it’s hard to say whether 8 Ball & MJG have been around long enough to truly be called “Living Legends,” they’ve certainly proved with this album that the last decade of releases was only the beginning. Hopefully by signing with Bad Boy and getting P. Diddy’s seal of approval, they’ll be around forANOTHER decade, at which time this album’s title will most definitely be appropriate.