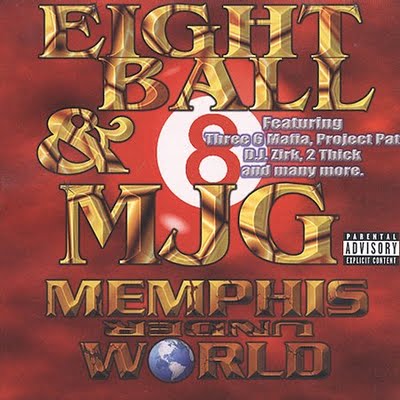 Before the advent of crunk rendered the words ‘dirty south’ taboo to rap purists, trailblazers like UGK, Three Six Mafia, Fat Pat, ESG and the Geto Boys etched their place in the hearts of rap mavens worldwide, establishing the third coast as a veritable source of evocative, grime-soaked music. Of all these pioneers, though, perhaps none of them have encountered the success that Eightball & MJG will likely meet with their signing to Bad Boy South (and the widespread airplay of their club anthem “You Don’t Want No Drama”). While UGK flirted with mainstream acceptance when their collaboration with Jay-Z filled dancefloors across the globe and one could put forth an argument for the reverence Scarface has earned from rap circles (though does anybody remember Willie D and Bushwick?), Ball & G finally seem primed to be in a position where they can magnify the buzz they made with “Buck Bounce” and secure a genuine crossover audience. To their legions of frighteningly devout fans (in which you can count me as a member), this acceptance is long overdue when one considers the unparalleled consistency these Memphis juggernauts have upheld for the past decade.

As a document of classic early Memphis rap, there is no better example (save for the early Three Six material) than this seminal work. If you have ever had the foresight and good taste to purchase a Three Six underground tape, this disc adheres to a similar template- plenty of chilling keyboard riffs, sludgey, monstrously thunderous bass drums, simplistic lyrics delivered in a staccato, distinctly Tennessee manner. To this reviewer, there are few sounds that evoke as much gooey nostalgia as vintage Memphis rap. You’d be hard-pressed to find music quite as hypnotic or arresting- with an ethic similar to G-Funk, the sound is unashamedly stark, a classic drum sound (Roland 808â€¦I LOVE how you can trace these drums back to a certain era, that makes me all warm inside) envelopes highly minimal yet chilling synth melodies and unapologetically harsh lyrical content, often revolving around the grit of an impoverished South. The bass drum thuds out your subwoofer like a death knell, seeping into your subconscious with menace and murderous intent. This is the rap equivalent of black metal- music stripped to its barest form, grippingly honest and horrifyingly genuine, a headlong exploration into the darkest recesses of the human psyche.

What is also of particular interest here is the rudimentary delivery of both Ball and G. In all honesty their styles here are virtually inseparable from earlier Crunchy Black, Playa Fly and Koopsta Knicca, adopting the choppy, brief flows so prevalent in their vicinity at the time. While both emcees have shown tremendous development in recent years (particularly Eightball, dude sounds NOTHING like he does now on this record, I would liken him more to Project Pat here), it’s hard to find fault in the artistic execution here, as both emcees ride the morbid soundscapes with effortless ease. Of course, the one flaw that invariably arises on this recording is the fact that Ball & G had yet to assert their own unique identity- the parallels to other contemporary Memphis artists of the time, particularly Hypnotize Mindz family members, run deep, and naturally Juicy J handles some work behind the boards here, even offering reinterpretations of Three Six staples like “Who Got Dem Nines” (FLAWLESS song) and “Break Da Law.”

There are few rap recordings as compelling, engaging or historically important as this one. While talk of firearms and murder have become alarmingly commonplace in today’s rap climate, much of it lacks the forceful insistence of forefathers like the Geto Boys and NWA. This is clearly not the case on this opus- as it progresses and unveils its lurid tales of murder and contempt over macabre Gothic soundscapes, it seizes you by the neck, sending chills down your spine as you nod your head to the sludge seeping out your speakers. While less-informed detractors would call this work dated and primitive, I feel the raw urgency captured on this recording is timeless. If you are curious about quality Southern music or are intrigued by the gangsta rap phenomenon in general, this is crucial listening (as with every Eight/G album anyway) and an ideal document of earlier Memphis rap. This is raw music untainted with flashy technological flourishes or sanitised gimmicks, and if you can appreciate honesty, ingenuity and plain TRUNK BANGIN’ FUNK in your music, you need to start digging in your used CD store right now.