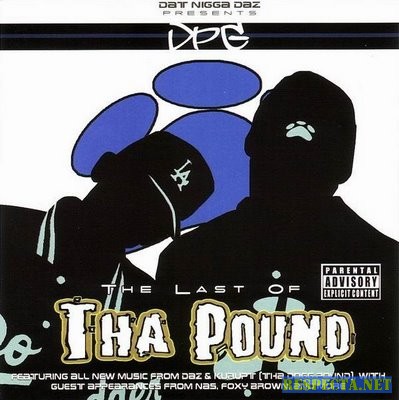 These words grace the end of the unreleased version of “Don’t Stop, Keep Goin'” – a song that originally appeared on Death Row’s release of a “new” Dogg Pound album simply titled “2002.” As writer John Book noted at the time of it’s release, it wasn’t much of a “new” album at all. In fact it came across to many observers as a rather desperate attempt by Suge Knight to milk the last remaining name recognition of Tha Dogg Pound to unsuspecting hip-hop fans who MIGHT have actually believed they still recorded for Death Row. The tracks were, in John’s words, “a compilation [..] featuring Tha Dogg Pound as a group, solo tracks, or guesting on other songs.”

Few people probably realized the extent to which Knight shamelessly traded on the fame of Daz and Kurupt for a quick buck when releasing “2002.” The new Daz & Kurupt CD “The Last of Tha Pound” provides immediate insight, when you listen to the unreleased version of “Don’t Stop, Keep Goin'” that makes up the opening track. In the version previously put out by Death Row, a Tupac Shakur verse took the place of the lyrics originally recorded by Nas in the second stanza. Nas? That’s right. Knight clearly knew he could exploit both Dogg PoundAND 2Pac fans by having him be featured on “2002” and cash in on both groups buying this “new” album. The Shakur lyrics fit the song like a glove, so few people would catch on and fewer still would ever know. To be fair, both versions of the song are fresh, so no disrespect is intended to Shakur fans in any way. It’s just interesting that Knight would replace the words of a living man with those of a dead one – I suppose you pay out less royalties that way. Here’s a section of the original Nas lyrics:

“The Golden Child shot that ass up cause you was holdin out
Let the streets be the courts, and corners holdin trial
Fatal not fictitious, I rock the cable eighty-six inch
Foreign cars, young with crazy bitches
Mad smoke makes me able to quote
So listen in, ill editions of the murder he wrote
A provacative plan, could bring a knot to my hand
As the pyramids that stand on the top of the sand
I want G’s, numerous seeds and real wild
I pleaded guilty, like Bob Marley the weed kilt me
I +Intercourse Verbal-ly+, poetic purgin me
to copy words of me, leads to murder in the third degree
I learned to live life fast, so I could count
very large amounts of cash with Kurupt, Tha Pound and Daz”

Judging both by the choice of introductory track and the outro that was added to it, Daz & Kurupt have decided to take one more shot at their former label and it’s CEO. One can hardly blame them for their bitter animosity towards both, but in 2004 the issue is moot since Death Row exists in name only and can at best only spurn out reissues of their classic albums from the 1990’s. The rest of these songs would seem to be more unreleased masters of songs that Death Row either never released, or remixed beyond recognition. While it is entirely possible that Daz & Kurupt would reunite one mo’ time to do their thang, 2001’s “Dillinger & Young Gotti” seems to have been their last shot at recapturing the glory of old, and although it was well received by their fanbase it didn’t make much of a splash on Soundscan.

Since then Daz and Kurupt have resumed their solo careers, each holding on to a part of their legacy in hip-hop while simultaneously trying to push proteges and be moguls for the next generation. What remains on “The Last of Tha Pound” is nothing to snort at. The relaxed “What Tha People Say” comes across like a remake of a “People’s Instinctive Travels” track by A Tribe Called Quest, and works well in that regard. “Got to Get it Get It” featuring Foxy Brown could be a new track, but Foxy’s voice sounds as young as when she used to duet with Jay-Z. The pimpish “Stories of Hoez We Know” would be fresh in either era, while “Jakk Move” and “Started” both sound like tracks that were cut from “Dogg Food.” Really, who knows? But if you’re a fan of Tha Dogg Pound, “The Last of Tha Pound” is a much more worthy and believable album than “2002” was. Daz & Kurupt will be happy either way since they put this one out themselves, so Suge Knight ain’t gettin SHIT.