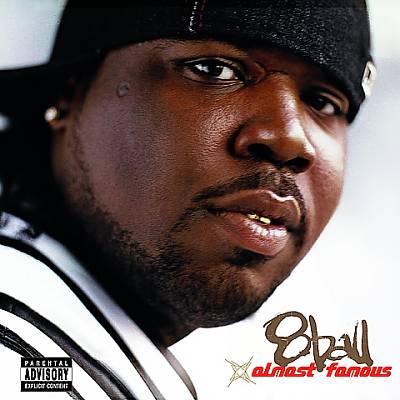 After his double disc “Lost”, I personally opposed the idea of another Eightball solo album, because it proved to me that Eightball & MJG was one of those duos that just shouldn’t go seperate ways, even if only temporarily. But it’s a new millennium, a new label, and the same ol’ Eightball. After teaming back up with his partner in rhyme for last year’s “Space Age 4 Eva” and headlining the recent “8Ball Presents The Slab”, the Fat Mack is back to put his weight down on this industry that favors drama queens with lyrics slim as fashion models. Eightball may not be the most complex lyricist, as a matter of fact, he’s more like the exact opposite, but the correct technique is not everything in rap. Being real is as important as being ill. And sometimes being real is what’s really ill. In that respect, Eightball is as original as these rappers come. You see, he may be talking about the hard life, the beautiful women, the alluring intoxicants, he may be a grown man of respectable size, but at heart the rapper Eightball is still the young boy with the soft-spoken voice who writes poems to express his innermost feelings. That’s how he comes across to me. That would explain the sincerity and the simplicity that is at the root of his entire body of work. Among the more damaging images that rap could convey are the teenage rapper acting the manchild and the grown rapper acting the childman. You’ll often meet these characters when listening to rap. They way I described Eightball, you should expect hearing the occasional immature statement when listening to this album. But overall “Almost Famous” professes a maturity not often heard on rap records. One welcome change is the absence of all that pimp shit. He’s got some treats for the ladies all right, but he delivers them in a respectful manner (“Witcha’ Lookin Ass” w/ Ludacris, “Holla Back” w/ Carl Thomas, “Like Dat'”).

Let me illustrate how Eightball takes a different route than expected: When you hear the introducing bars to “Daddy”, you expect it to be the usual dirty laundry being washed in some baby mama drama. Only to find out that Eightball & MJG dedicate this one to their children who wait at home for their fathers to return from touring. Producers Corline 6000 and DeWayne ‘Big Du’ Martin serve up the perfect backdrop for this tearjerker while some kids chant the chorus, kids that undoubtedly are Eightball’s and MJG’s kids. At least on this song Eightball is there for his son:

“Runnin’ through the airport
my little shorty birthday and I ain’t there for it
Another show, I gotta get it how it come to me
even though I wanna see my baby run to me
smilin’, reachin’ up so I can pick him up
it’s not enough that I can send money and buy him stuff
I wanna see him blow the candles out on the cake
be there to correct you when you make mistakes
It’s only so much your mama can do for you
even though she do so much for you
Only a man can teach you how to be a man
teach you not to be a fool in this foolish land
Listen to your mama, go to school, don’t trip
learn everything, being smart, that’s hip
Little man, be strong, hold the house down
and I’ma be there to see you when I touch down”

It’s only right that “4U” follows this one up. Taking turns with female guest Cl’che’, Ball dedicates this one to those who need dedication, explaining his motivation in the hook: “I know I been through a lot / but pain don’t ever stop / asked God to bless me with all I never got / he put it in my reach, so I can do what I do / I feel blessed, so I’m singin’ this song 4U”. This is indeed a welcome break from all the pointless hating-back-on-player-haters:

“It’s all love when I see you, dawg
I don’t envy niggas cause they think they got it all
Up in the club, Crisy-crissin’ with them boppin’ bitches
some bitches ride you more than hoes cause you got riches
baby mamas and street dramas that turn to trauma
My neighborhood is hotter than Arizona summers
my niggas homeless and still gon’ do what they should
just because a nigga thuggin’ don’t mean he ain’t good
get him out the hood, let him see what he can be
this whole world is a oyster for you and me
let’s bust it open, get the pearls and the pretty girls
but don’t forget about the ones who suffer in this world”

It’s no coincidence that “Almost Famous” opens up with a song called “Thorn”. No matter how good you have it, there’s always that thorn in your side to tell you that others don’t have it that good. Produced by newcomer Nitti, “Thorn” brings the album to an early climax. With its spheric sound the track shuttles Ball towards a guitar solo finale, defying all categorizations and restrictions. So, in a way, you can regard Eightball himself as some type of thorn, a thorn in rap music’s silicone- and steroid-shaped body:

“Yeah, I’m like a thorn on a rosebush
hard and prickly and discarded usually
Unseen, the world shittin’ on my hopes and dreams
hope and dream that I can open up my throat and sing
Bring poetry and fly when I spread my wings
and let the world see the beauty in these ugly things
Scarred like a scab, brittle and hard
being green and lame bring little reward
Slippin’ is a mistake and most, they pay for it
gruesomely hideous, so you really can’t ignore it
Yo, you see them pretty muthafuckas on the TV screen
live and die for that fake shit on MTV
turn the cameras off and watch your hero transform
runnin’ away from what real life did for him
Under the glitter and the bling of them expensive things
that’s where you find that truth and dog, that’ll set you free
The real shit is the shit that I would want for me
not them fools tryin’ to copy everything they see
this I will never be, from me you’ll never see
before I do it I’ll say fuck this whole industry”

That’s that type of album right there. One that doesn’t really care about being famous, because being ‘almost famous’ is just right. Yeah I know, it says P. Diddy is on it, but he’s not really there (besides, I wouldn’t mind). Like, unfortunately, Ludacris isn’t really there to give us insight that would stretch beyond the hook to “Witcha’ Lookin Ass”. Musically, there’s the usual calmness reigning over this album. “Spit” sounds a bit Swizz Beatz-meets-Down South, but I preferred it when Swizz was actually present (like on “Space Age 4 Eva”). The rest is typical Eightball & MJG: A leisurley stroll that is so cool it gets you all the more excited. Highlights include Nitti’s “No Sellout” (“When I open up my mouth, you can hear the South / packin’ guns, stackin’ funds, fuck sellin’ out” had me thinking it’s 1995 all over again) and “Do You Really” (w/ MJG), Corey Woodard’s and Blackstract’s “Live This” (“Dope makes cash, CD’s make g’s / dope gets you locked up, CD’s get you free / you might think that if you don’t know the game / then niggas rearrange, but the game stay the same / I put it in my head, and I locked it / loaded up my mouthpiece, cocked it and I popped it”), the slo-mo-sci-fi vibe of “Slab Rider” courtesy of Corline 6000 and DeWayne ‘Big Du’ Martin (“Who wanna ride with the big Ball / I’m fo’ do’s, I got room enough for all of y’all / If you don’t know me, I’m the one they call the Fat Mack / I’m givin’ instructions on how to lace a fat track / I come from hard times hopin’ I’m never goin’ back / never thought that all of this would come from writing raps”), 0omp Camp’s “Stripes” and those already mentioned. Only the posse cut with Dorasel and Thorough “Don’t 4get” is disappointing.

After listening to “Almost Famous” you’ll see that this here rapper has done some thinking of his own. And he is kind enough as to share his thoughts with us, carrying his own words into effect: “Words give life to the things that we think about / Life is hell, we go to heaven when we make it out.” From now on I’ll warmly welcome any idea of another Eightball solo album.