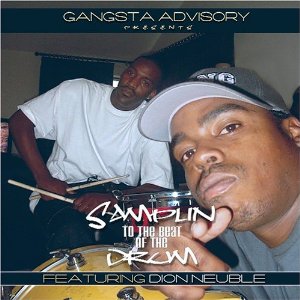 Samplin' to the Beat of the Drum

Daz Dillinger + Dion Neuble :: Samplin to the Beat of the Drum

Daz Dillinger is notorious for his funked out production and gangsta raps. Fans have come to expect a certain level of quality and content when they purchase a Daz Dillinger album. For that reason, “Samplin to the Beat of the Drum” may be one of the most disappointing purchases for Daz Dillinger fans. This disappointment won’t stem at all from the quality of the content found on this release, instead many fans will be disappointed to find that this is in no way another Daz solo album or even compilation. Daz has instead chosen to release a drum loop CD for producers. “Samplin to the Beat of the Drum” contains 28 tracks, lasting 28 minutes total, of drum loops played by drummer Dion Neuble. While fans expecting Daz’s signature gangsta shit may feel they wasted their fifteen bucks, producers should scramble to the stores and cop one of the year’s most innovative CD’s at a bargain price.

Producers are usually extremely secretive about everything they do. Rare is the time you’ll get a producer to be 100% forthcoming about their equipment, sounds, etcâ€¦ Even rarer is the occasion you’ll get a producer to share his drums with you. Daz has done just that by enlisting his drummer, Dion Neuble, to play loops using the same drums that play the background to his own G-Funk. For anyone familiar with the producing game, the prospect of getting a well known producer to share his drums is music to their ears. Sure, those who really want to copy someone’s sound can just jack the drums by taking clips from released tracks, but there is a big difference between jacking someone’s shit and actually getting the person’s nod of approval. Daz actually encourages producers, emcees, and DJs to use these loops at will.

Now if the mere opportunity to get your hands on Daz’s slick drum loops wasn’t enticing enough, imagine being able to do it for a price of $15 bucks. You heard right, you can get a CD full of professionally recorded live drum loops for $15 bucks. Those in the know are aware that companies tend to charge a pretty penny for samples of any kind, with the cheapest sample CDs costing around $50 and going up in price without limit.

The loops found within are varied and dope enough to fit any aspiring producer, emcee, or DJ’s needs. From fast paced rhythms capable of getting a party started to head nodding loops appropriate for riding in the car, everything is included. Those looking for variety in drums may be a little disappointed as Neuble mostly sticks to the same basic set up. But before you dismiss his drums as being too common, just remember that a whole history of rock music is built around the same snare/bass drum set and it continues to be relevant.

“Samplin” is truly an ambitious project and one that will hopefully mark the beginning of a new trend. Going into a studio and recording drum loops may not be as difficult as recording an album, but it is something that is rarely done. As technology continues to blur the line between consumers and producers of rap music, such projects as this may become the norm to help keep fans feeling connected to artists. Until that moment does arrive, you’ll have to settle for the occasional release of albums like “Samplin.”

Daz Dillinger + Dion Neuble :: Samplin to the Beat of the Drum
10Classic
Music10