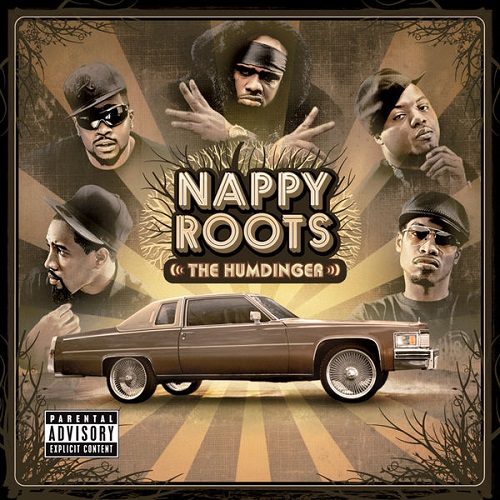 The word “overdue” is not just an understatement in Nappy Roots case, it’s a GROSS understatement. Five years ago this promising Kentucky crew had done the nearly impossible in hip-hop – they made a strong statement on their debut album “Watermelon, Chicken & Gritz” and then released an even BETTER sophomore album with “Wooden Leather.” Success may have been their undoing, because the pressure to produce ever doper albums year after year may have been impossible to deal with. It’s telling that after such an interminably long delay the group is no longer with Atlantic Records, choosing instead to go their own way on a self-distributed imprint. Obviously somebody at Atlantic is smart enough to scout out Southern talent like Little Brother, Nappy Roots and Trina yet nobody at Atlantic seems saavy enough to keep them under contract once signed. Hip-Hop doesn’t seem like a top priority for the label in general these days. I’ve asked them six different times to change my e-mail address on their mailing list and have been ignored. It doesn’t matter though – a spam filter will block new messages about what Danity Kane is up to these days. Moving on!

And speaking of moving on, R. Prophet has left Nappy Roots to pursue a solo career, which means his voice will be greatly missed on the long-awaited album “The Humdinger.” Thankfully the group is still as soulful as ever even without him on the Big Al produced lead single “Good Day,” rocking and rolling over a jazzy piano beat while a chorus of children croon “Ain’t nobody gotta cry today, cause ain’t nobody gonna die today, you can save that drama for another day.” Okay! No argument with that sentiment or these upbeat lyrics from me:

“We might as well do exactly what the children say
Take the day off, hit the park and just hang
Barbecue, roll a few, and put up the deuce
And if it’s beef, put the piece down, throw up your dukes
It’s time to change our ways, so we can save the day
for the children’s sake and make a better place to play
If it’s all good break out your Coupe and grip your wood
And if you’re ridin dirty light your spliff and blow your… {*smoking sound*}”

Ain’t nothin’ wrong with having a little fun under the sun, although the Nappy Roots might have been well advised to release this album in June or July to hit the peak of the summer fun season. It’s not necessarily over yet in August, but the numerous “back to school sale” signs in every store are a good hint that shit ain’t gonna last. Southern and black pride is the overriding theme for the Nappy Roots throughout “Good Day” though, which puts them squarely into the same category as crews OutKast and Goodie Mob. The comparison is apt both musically and lyrically when listening to songs like “Beads & Braids,” where members of the team speak unapologetically on their long absence:

“We the realest that you witnessed in a long time
Long story short, the music business tried to pimp us, tried to kill us
Tried to break a nigga’s spirit – to no avail – now you hear us
Now we back for the third, motherfuck a record deal!
No more slave to the rhythm, never snitch and never squeal
Oh yes I burned a couple bridges but them bitches wasn’t real
They was faker than the haters in my grill sayin chill
If I was you I would probably do the same thang”

“The Humdinger” is an apt description of their third release, since the dictionary definition of the word is “a striking or extraordinary person or thing.” It’s remarkable that despite five years of being jammed up in a bad label deal, Nappy Roots have still come back with 16 tracks of high quality music. They cover a wide range of topics and styles with their unique Kentucky charm, from a clever ode to sexuality on “Pole Position” to the deep piano chords of riding fly on “Swerve and Lean” to the sure-fire radio single “Down ‘N Out” featuring Anthony Hamilton crooning the blues on the hook. The most anthemic song on the album though is “Small Town,” an understated Count Justice production where “high school sports is what we live fo’, hit the lotto next week and still po’.” Even big city folk will be able to relate to the rural values of the Nappy Roots, even if you don’t live in a place where “e’rybody cousin and e’rybody kin,” because no matter where you’re from it’s all about the struggle to survive while trying to have a little fun with your friends and fam along the way. Many artists have from the South have tried to put forth the notion that “the whole world is country” but Nappy Roots prove there’s no need to even explain – good beats and rhymes are good no matter where you’re from or what record label you’re signed to.