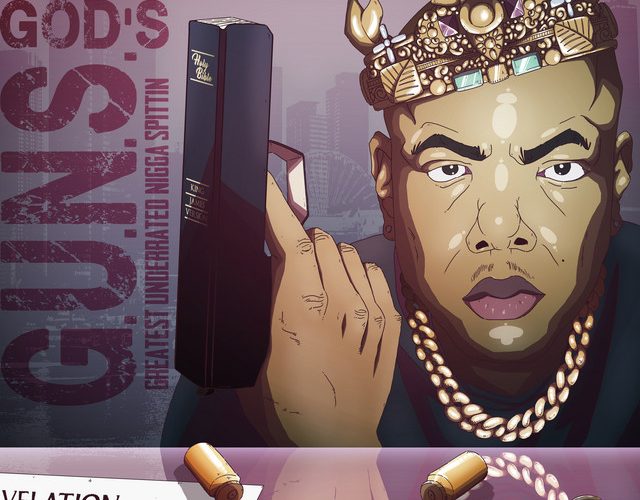 Donald “Vakill” Mason is the one Chicago emcee who I think can give Common a run for his money. Chicago’s rap scene draws heavily from elements in the east coast hip-hop scene, from beats and rhymes. Throughout his 20-plus years in the rap game, Vakill has demonstrated talents for wordplay, punchlines and multis crammed into single bars, and cinematic narratives as well. Though “God’s G.U.N.S.” has been in the works since 2017 and was intended to be a full LP, unfortunate circumstances reduced it to a seven-track EP. Even shortened, it still packs a welcome punch and marks the first project released by Vakill since his third LP, “Armor of God”, in 2011. The EP’s cover is a rendition of Vakill wearing a crown while holding a weaponized Holy Bible. If you think that warrants a “DAAMMNN!”, just wait until you begin listening to the first track.

Usually, it’s Panik and Memo of Molemen Records who handle Vakill’s production. While they both are behind the boards on three tracks altogether, it’s Nottz Raw who has the single most production credits on this album. To start things off, Memo laces “The Intro ChicaG.O.A.T.” for Vakill to spit relentlessly for four minutes. He uses his lethal wordplay to skewer pop culture and events, from Bill Cosby, the Marvel Cinematic Universe, Stephen King’s “IT” to America’s ongoing racial tension. An example of his proficient skill is “The carrot is dangled with Anglo hands at / an angle that angers in pursuit of Star-Spangled advancement / Fuck the American Dream, it’s hard to see our way out of these hoods: Django Klansmen!” The EP isn’t bereft of guest stars, the first of which is fellow Chi-Town native J.U.I.C.E. on the Nottz-produced “Focus”. With the beat slightly slowed and horn-laden, Vakill is lethal with lines like “My agenda is simple / Only resort to +hammers+ and +iron+ to +shield+ my +green+/ Avengers Assemble!” while J.U.I.C.E. is no slouch either when he spits “It’s like I’m robbin’ a bank, I off the hostages / Bitches they get high of the dank? They coughin’ sausages.”

Panik makes his first appearance on “As Long as the Villain Wins” and provides a beat without bleakness or menace. Things pick up when we reach the album’s first single “Vestcheck 1 2” featuring Twista. With a piano-heavy beat provided by S.C., Twista shows that we can provide a sick assist even when he slows down his trademark quicksilver flow. The second single, “Catalogue of Filth”, is the best track. It’s classic Vakill: Back-to-back tongue-twisting multis and imaginative punchlines, and a beat with a dangerous tone and choppy drums (courtesy of Nottz). Vinnie Paz is featured as well, but he’s sadly limited to just the hook:

Nottz makes his final album appearance on “God’s Got ‘Em” and laces the most playful beat on the album. Certain parts of it sound whimsy, but the hard-hitting drums and snares allow Vakill to let the listener know that “if no money circulates here, then I’m cuttin’ off ALL the fuckin’ circulation like Precious in Hooters apparel” before the album is closed off with “Falling Down.” Also containing a feature, it’s only fitting that it ends with another assist from another fellow Chicago rapper, this time Mikkey Halstead. The Memo-produced beat makes use of piano keys and a high-pitched vocal sample for the hook. Despite the long delay and one or two slight duds, “God’s G.U.N.S.” shows that Vakill hasn’t lost his skill on the mic. Though I wish it was a longer showcase of his dark humor and cerebral lyrics, “God’s G.U.N.S.” is certain to satisfy long-time Vakill fans and lyrical fans in general.