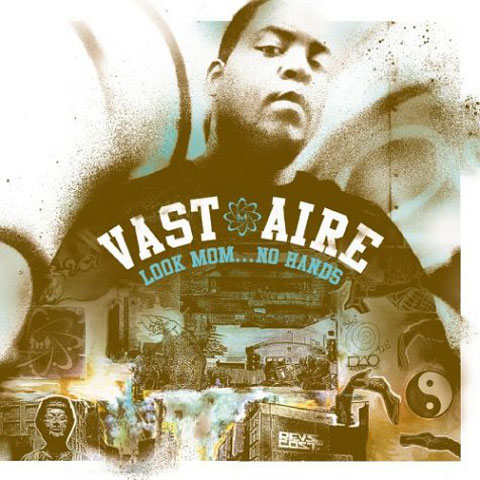 To this day remaining to be one of the most underrated debuts in the past decade, Cannibal Ox’s The Cold Vein, released in 2001, pushed the boundaries of rap music by combining El-P’s avant-garde production with the unique lyrical talents of members Vast Aire and Vordul. Covering subject matter ranging from New York City life to females to battle-friendly shit talking, the duo crafted an album full of creative highs and mind-bending originality. Unfortunately, heads have been patiently waiting for new material from Vast Aire and Vordul, with a sophomore effort nowhere to be found in the underground scene’s radar.

Answering the prayers of Cannibal Ox’s strong cult following, Vast Aire has dropped his first solo offering, “Look Mom… No Hands.” With Vordul’s own album expected to see release by the end of the year, “Look Mom… No Hands” is designed to separate Vast Aire from the Cannibal Ox shadow and gain his own acceptance as an individual MC. On Cold Vein, the nearly flawless soundtrack entirely provided by El-P fit Vast Aire’s off-kilter flow perfectly, creating a marriage of two talents that couldn’t be denied. Rather than continue to build upon this chemistry, Vast Aire enlists a diverse roster of beat-makers, something that proves to be both positive and negative.

“Look Mom… No Hands” is a hit-or-miss affair, sporting many highlights but afflicted by a number of misfires. “Pegasus” benefits from a hypnotic backdrop sprinkled with female sighs that Vast Aire attacks with impressive results. “9 Lashes (When Michael Smacks Lucifer)” is a scathing, but ultimately unnecessary, diss record aimed Esoteric, who has been at verbal war with Vast Aire and his Weathermen associates. RJD2 supplies the beat, a blazing mixture of dark pianos and powerful drums that make this a highlight for the production alone. “Why’s Da Sky Blue” captures the unconventional spirit of Cold Vein, with Cryptic’s beat delivering the same dizzying effect felt on El-P’s creations, while Vast Aire’s verses on the track shine as he does a bit of free brainstorming.

Employing a wide range of producers unfortunately brings Vast Aire’s flaws to light. Madlib’s jazz influenced work heard on “Could Be You?” is wasted by our host’s scattered-brained commitment phobias. “Viewtiful Flow” features an upbeat and radio-friendly Jake One production that sounds completely out of place on this album. The simplistic piano-powered sounds heard on “Poverty Lane 16128” get brutally abused by Vast Aire as he delivers more offbeat lyrics that do not compliment such a bare-bones beat.

Thankfully, Vast Aire seems to realize that he is unable to hold down an entire album for dolo, so he calls upon a large number of guests to grace “Look Mom… No Hands.” “Zenith” is gimmick-free hip-hop, utilizing a banging beat as guest Blueprint demonstrates his lyrical expertise. The always reliable, and entertaining, MF Doom appears on â€˜Da Superfriendz”, with his equally off-the-wall vocals matching those of Vast Aire nicely. Vordul and Breezly Brewin show and prove over Madlib’s tight production on “Life’s Ill Pt. II (The Empire Striketh)”, while the dope lyrical exercise “Posse Slash” features tough contributions from Karniege, Poison Pen, Breez Evahflowin, and Aesop Rock.

Vast Aire is a gifted MC, but suffers from occasionally flying over listeners’ heads with lyrics that go beyond being intelligent to becoming unintelligible. “Look Mom… No Hands” is an album catering to those with adventurous ears, not afraid to hear something different. The potential shown on Cannibal Ox’s Cold Vein is not fully capitalized on, making this release somewhat of a disappointment. For his next solo project, let’s hope that Vast Aire reunites with El-P embraces his strengths, rather than exploiting them.