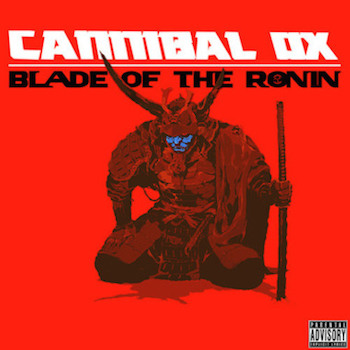 Cannibal Ox :: Blade of the Ronin

Vast Aire and Vordul Mega, the Harlem hip-hop duo known as Cannibal Ox, dropped their debut album, “The Cold Vein“, nearly 15 years ago. It was the first full-length album to be released on the now-defunct progressive NYC-based hip-hop label Definitive Jux. Produced entirely by Def Jux label-head, El-P, the album received near-unanimous critical praise. While both emcees rapped about life in New York City from a post-apocalyptic perspective, it was El-P’s futuristic urban soundscapes that were a major aspect of the album’s acclaim.

Between then and now, Vast and Vordul have released uneven solo albums and lacked the chemistry of their debut. There had been talk of them prepping to release a sophomore album, but that window appeared to close upon the demise of Def Jux along with their relationship with El-P in 2009. In light of those events, “The Cold Vein” seemed destined to be their sole album, a critical darling with no proper follow-up in the same manner as J.D. Salinger’s “The Catcher in the Rye”.

From the sound and lyrical content, “Blade of the Ronin” has the influence of their debut. In fact, the opening track, “Cipher Unknown (Intro)” is reminiscent of “Iron Galaxy”. With the majority of the album produced by Bill Cosmiq, they try to recapture and relive the success of their debut. Cosmiq’s beat for the album’s intro sounds like he’s trying to mimic El-P, from the off-kilter synth percussion to the space-age aural mosaic. Because of this, there’s a minor inconsistency to the album’s overall sound. Like El-P, Bill Cosmiq produces and raps. Also, unlike their debut, the album includes several skits serving to tie some of the tracks together.

Vast and Vordul connect seamlessly as though they haven’t lost a beat during the 14-year interval. Their flows and poetic street talk haven’t changed, but Vast still holds court as the more unique lyricist. He makes frequent references to “G.I. Joe” in the second track, “Opposite of Desolate”, and retains his distinctive voice throughout. His wordplay gravitates to loose concepts comprised of his own esoteric interests. Mega follows a similar pattern, but he’s more inclined to wax poetically. The album is also longer than their debut and contains a greater myriad of feature emcees. Cosmiq appears on several tracks, along with Space (who sounds like Vinnie Paz), Swave Sevah and Elohem Star.

One of the surprise features was the inclusion of both U-God from Wu-Tang and the Artifacts from New Jersey. All three emcees appear on “Blade: The Art of Ox” over a vintage 90s-sounding beat. With hard drums, a female hook, and a sampled blues riff, all five men (especially Vast’s former fellow Weathermen cohort, Tame One) come correct. The album’s single, “Iron Rose”, not only contains lo-fi drums combined with space-age synths, but MF Doom makes an appearance as well. Though it’s been 11 years since he and Vast last collaborated on the Doom-produced “Da Supafriendz”, he steals the show with his monotone, but technically-gifted internal rhyme-laden verse:

The one track on the album that harks back to their debut the most is “Water”. It starts with a sample from Vast’s verse on “Pigeon” and contains musical elements of “The F Word”. There’s also a somewhat cinematic theme connecting the title of the tracks together. “The Fire Rises” and “Gotham (Ox City)” are both clear references to 2012’s “The Dark Knight Rises”, especially with Vast’s Bane impression on the intro to the latter.

The album touches off with another parallel to their debut entitled “Salvation”. Containing some dialogue from “Die Hard With a Vengeance”, the track is less futuristic sounding and more like ethereal boom bap. On the whole, the album doesn’t compare to “The Cold Vein”, and nor did I expect it to. That album was released at a time when indie hip-hop artists were essentially winging it and ended up succeeding. “Blade of the Ronin” has its own artistic ambitions that aren’t duplicative of its predecessor, all resemblances notwithstanding. Vast Aire and Vordul Mega have shown on this record that, as a duo, they stand alone and aren’t defined by their producer.