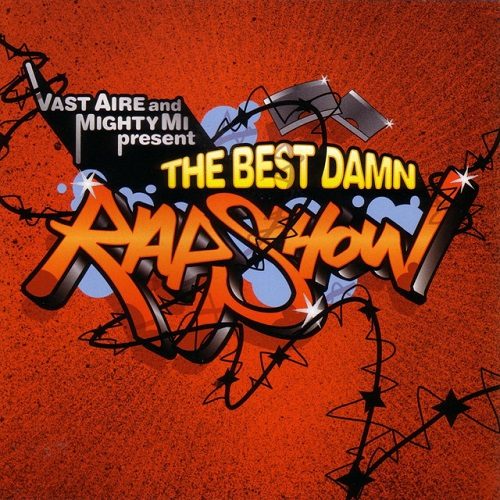 They probably would have called it “The Best Damn Rap Show Period” if they didn’t think News Corp. would sue their ass off (parent of all things Fox, including Fox Sports). The analogy extends farther than you might think – after all Tom Arnold may host The Best Damn Sports Show Period but he doesn’t produce the entire show or each segment in it. For “The Best Damn Rap Show” Vast Aire plays the role of the host, while DJ Mighty Mi produces all 12 tracks – and that’s HANDS ON production meaning every beat to the rhymes is all his.

“C’mon dude, your theory’s whack
You tellin me don’t eat pork, but you sellin crack”

If you’re not already familiar with Vast Aire, he’s the man who put the Can in Cannibal Ox and last year released his first solo effort “Look Mom… No Hands.” Opinion on his mic credentials has to date been mixed. The lyrics range from enigmatic to pragmatic, and while his flow at times seems stilted it’s tempered by solid breath control and a charismatic voice that brings his words home. Ironically pairing him with Mighty Mi has only made the comparisons to Mr. Eon, his well known partner from underground rap duo The High & Mighty. Eon’s at a relatively low octave, while Vast Aire is pushing up into the mid-range. Think higher than Nas, but lower than B-Real, and you’ve just about got it. While the similarity between their voices is not striking, it’s the way they flip script that makes them seem like two of a kind.

“Oh you don’t like this? You got beef?
We some Burger Kings, you can have it your way”

There’s a world of difference between the two quotes here. The former is taken from “Taboo” and seems relatively profound, while the latter from “Buck 50 Express” might feel clever at first but in retrospect seems cornball. I wonder what it is about Mighty Mi that attracts MC’s of this stripe to color his beats. Both Vast and Eon sound good while flowing, do occasionally deliver drop-dead punchlines, but the very nature of their clear diction may attract unwanted scrutiny. For Eon being a little bit cornball is actually part of his gimmick, or else he couldn’t get away with “Keep that shit tight like grandpa’s Speedos” snaps. Vast Aire on the other hand is trying to be taken seriously, and doesn’t seem to be writing bad quips for the humor value – apparently there are times when he just can’t come up with anything better. That doesn’t stop the man from trying though, and on occasion he does strike paydirt in a big way. Take “Vintage” for example:

“I ran from the moon, ever since I came from the womb
This means I did the unthinkable…
Some say the impossible
Put it in front of me, I leap over obstacles
I know my ABC’s and I’ll bust yo’ ass
I’ma win the fight but I’ma win with class
Heh – +Talkin All That Jazz+
But you was suckin your thumb when the titans clashed
I shouldn’t have to go there son
Weed smoke so thick, it’ll block the sun
You laughed first, but I’m laughin long
I get mad at bitch critics and make a dope song”

It’s interesting to note while in print this may seem like a regular rap pace, it’s actually delivered at about half the speed you would expect. Vast Aire could never challenge Big Daddy Kane or Twista in a tongue dexterity contest, but his “slow and steady wins the race” approach is refreshing in an era where some MC’s act like faster is better when it only means they shovel out garbage quicker. Mighty Mi’s beats are the lynchpin to “The Best Damn Rap Show,” and probably represent the dopest production he’s experienced since first linking up with Vordul in Cann Ox and being taken under El-P’s wing. Highly recommended tracks include the ambient echo of “Butterfly Knife,” the grimy boom bap of “What Goes Up” and the jazzy swing of “Fighter Pilots” featuring Tame One (the lone guest appearance of the album). Clocking in at just over 40 minutes, “The Best Damn Rap Show” is not a lengthy experience, but is pleasant enough that it almost seems too short. Vast Aire still seems like an unformed ball of rap clay though after all these years – capable of being shaped into great work but often lacking the definition such art would need. Mighty Mi provides the backdrop that raises his output to a higher level, but only time will tell if he can graduate from hosting “The Best Damn Rap Show” to being on a “SportsCenter” level.