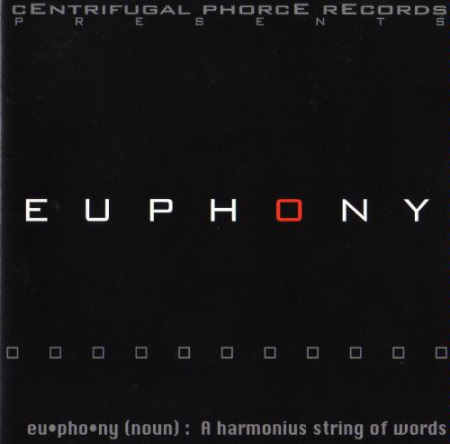 Compilations can either be the hidden gem in a heap of crap, or something that might be questionable. “Euphony” is a compilation from Centrifugal Phorce that gathers some upcoming artists in the hip-hop world, a few of which have gained a healthy following in the underground. Names like Aesop Rock, Yeshua DapoEd, and Vast Aire associate with new people like It and LoDeck. If you’ve come across their names but have been curious about their power on the mic, this is a CD worthy of many listens.

There are many tracks that stand out for me, and I’ll just begin with “Half Life” by Cryptic One. Just as his name indicates, Cryptic is about raising the ante on lyrical wisdom, either through puzzles or through being extremely direct. As interesting as his lyrics is the production, which mixes jazz and funk drums, hard rock riffs, and a Paul Horn-ish ambient flute solo.

Vast Aire, known as being one half of Cannibal Ox, delivers one of the best tracks with “His Majesty’s Laughter”, with such confrontational lyrics as “Sending postcards from the edge of my sanity/ With my face on the stamp, repping vanity/ Some can write rhymes right, and on the left/ Opportunity was like fuck knocking, I’ll pick the lock”. The laid back doom-like groove, complete with horn riffs that fade in and out of the night, makes you believe Vast Aire is out for the verbal kill, but he cuts off after only one verse. The listener is left hanging, and maybe that was his intention.

For an example of crafiness, Atoms Family hook up with Greenhouse Effect with “Time To Unravel”. With an instrumental that sounds straight out of the 101 Strings funeral library, a funky ass beat is dropped and you hear vicious and wonderful verbal tales:

“My think tank seems to stay stuck on F
even when I’m under stress I got enough left
to fold you with a punch to the chest
and while I got you listening I might as well mention
I already over lot of cats too for flinching
that’s four for you because you don’t do nothing different
leave rap alone and try to earn a decent living
instead of taking up space, back to the occupied by somebody better
I never let a halfstepper get ahead of me
printmatic, at it again? I’ll shatter your pedigree
You still cinematic like Jet Li”

Each MC has a flow that sounds nothing like each other, combine that with a track that is so fucked up it sounds beautiful, and this is the kind of song that the mainstream is not prepared to handle. If this hasn’t been released as a 12″, it should be. The wordplay even extends to the title of the CD itself. One of the great things about this CD is that it’s filled with artists that deserve to be listened to extensively. Welcome to the 21st century.