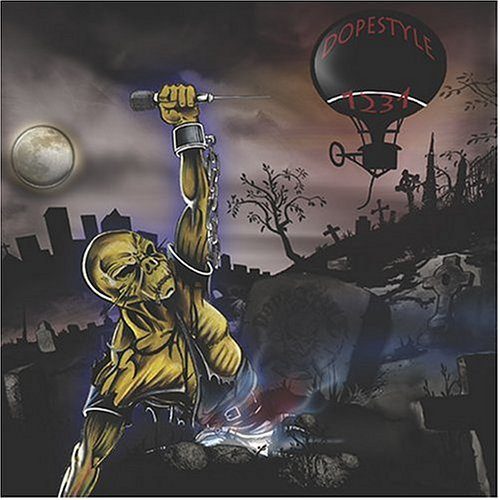 Much like their promoter, KutMasta Kurt, the Dopestyle duo likes it like the old days: one producer and one MC. DJ Tom C handles production, establishing the mood, tone, and sound of the album; while MC Dopestyle lays down the lyrics as the group’s figurehead. This formula has been known to work beautifully in the past, pushing both artist’s efforts beyond the brink and usually bringing a more classic, cohesive feel to the album. A recent example of this type partnership came with the maniacal merging of MF Doom and Madlib to produce “Madvillainy.” And as “Madvillainry” shows, artist/producer partnerships breed beautiful results. On “Dopestyle 1231”, the Bay area duo definitely takes a crack at the classical formula for a horror-rock rendition of hardcore rap.

If the half-eroded alien MC bursting forth from the album’s cover doesn’t evoke some dark, demented feelings- the music surely will. From worm-infested head to bone-eroded toe, “Dopestyle 1231” sounds spooky. This is almost entirely due to DJ Tom C’s raw construct of the album. His gritty instrumentals and spooky sampling make for a haunted ensemble of ghoulish beats. For example, the ominous track nine, “Darkspell.” Here a ghostly female voice softly sings like a siren in the sea, reeling you into the rocks below: sharp, pointy piano keys and a cryptic violin that sulks just below the water’s murky surface.

The tombstone music fits the premise of the album, but begins to develop a slight hitch in its bassbeat physics. Tom C. multi-layers his beats, using live drum patterns as a foundation and then building on them with a electronic baritone overtop. This can work, but both layers must be careful not to step on each other’s shoes. Frequently on “Dobestyle 1231,” the weight of the latter layer either collapses in on the beat, or overcomplicates it. As early as the second track, “I’m Grendel,” this presents itself as a problem. The track starts out fine, with the live swish, snaps, and snares of a solid enough beat; but as soon as MC Dopestyle rushes in and the bass drops, all is washed out to sea. This track, and many others, become so busy and furiously paced they lose their sense of rhythm. This is a dangerous position to be in, as it teeters on noise.

Also unfortunate is how the album’s major merit, its cohesive horror theme, is somewhat self defeating as well. “Dopestyle 1231” doesn’t have the true, moody blues of say..Raekwon’s “Rainy Dayz.” Instead, it is the creepy-crawler spookiness you felt maundering through your strobe-lit, high school haunted house. When the ketchup spotted principle pops out, flailing a bladeless chainsaw at you, all his bluff-buzzing only works for a corky, pity scare. From time to time “Dopestyle 1231” might admittedly spook you, but it soon proves bland and quickly extinguishable.

Furthermore, thematic albums usually entail a certain purpose behind their premise. For instance in our previous example, Raekwon’s “Only built for Cuban Linx” didn’t just muse a mood, it encapsulated the entire coke-commerce culture of the street. The mood in “Dopestyle 1231” is undeniable. But the theme and purpose behind the sound is absent.

However it is not the music that makes the horror so muted – it’s the MC. At an ear glance MC Dopstyle appears to fit nicely with the premise. His voice is rough and gritty like some garrulous graverobber, and his rhymes are ghastly and sordid. However, it doesn’t take long for MC Dopestyle to wear out his welcome with extreme monotony. His tedious tone and robotic flow ossify, nullify, the music’s potential macabre rapture. Plus, sometimes his delivery is just plain goofy, making the album feel like a bad horror flick. The trip through “Dopestyle 1231” is like the precarious carnival cart ride that inches you through a shadowy tunnel track, periodically spewing cardboard Goblin cutouts out, trying to jack-in-the-box you with cheap tricks instead of genuinely scaring your hair gray. MC Dopestyle’s is just too lobotomized to keep the scare tactics alive.

Besides the graveyard vibe, a heavy metal influence is also apparent on the album. Songs like “Lone Ramblin'” and “Rap Delite Delux III” provide the more obvious examples of hard guitar angst, but many of the resounding, feral baselines murmur a little Metallica as well. Again though, MC Dopestyle quickly nullifies any musical momentum with monotony. The group’s counter-chemistry seems to make a lot of noise and not a lot of music.

Its hurts that where this type of conjugal chemistry between producer and rapper has proven auspicious in the past, the Dopestyle duo seems to be detrimental to each other. MC Dopestyle’s monotonous flow seems to augment DJ Tom C’s multilateral production. The two styles clash like the ocean breaking on the shoreline and all that is left is the weak, swirling pool of eddies and foam. It’s one thing to give an album a cohesive feel and quite another for that cohesiveness to blend-bland into a muddy mix of almost indistinguishable tracks.

Several guest appearances highlight the album. Del shows up on “Size Double D” to lay his exceptional skills, providing a nice break from the unflagging monotony. Also, KutMasta Kurt must have called up some old friends for favors because his former partners in rhyme crime, Kool Keith and Motion Man, pop up to do cameos on “Wedgie” and “Threshold Underbelly.”

Overall, “Dopestyle 1231” has too many counter-productive elements to thrive on its merits. It’s supposed to be scary, but it’s corky. Its tries to be adrenaline pumping, but its mundane. It wants to be unconventional, but its completely formulaic. The album had a lot of promise, and was co-created with the best of intentions; but it just produces bland results. What starts out as just small problem with monotony, grows into an album killer, spreading from track to track like the clap until the entire album flatlines. It’s a good effort guys, but not enough to lock the listeners.