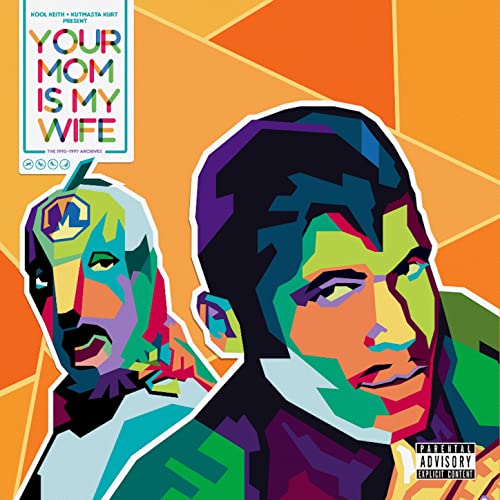 Your Mom Is My Wife

Kool Keith & KutMasta Kurt :: Your Mom Is My Wife

There are only two producers are really capable of capturing the madness of Keith Thornton b/k/a Kool Keith and translating it to the masses — Dan the Automator and KutMasta Kurt. Others have a mixed record of successes and failures in their attempts to corral Keith’s eccentric sexual fetishes and multiple rap personalities into something listenable, but these men have created albums that stand the test of time. Whether he would admit it or not, Keith needs them to create good rap music. Left to his own devices (and/or production) he creates wildly uneven releases that range from near brilliance to total excrement. The latter often seems to be the point. I can hardly blame Kool Keith for releasing shit knowing people will buy it just because he made it. (Guilty as charged.)

Discovering a KutMasta Kurt collaboration with Kool Keith titled “Your Mom Is My Wife” got me excited right away. Keith is so prolific that it’s possible to miss multiple albums a year (or month) that he puts out, so I take much greater interest in one from a producer who has a track record of success with Mr. Thornton. Threshold Recordings put this one out in 2016, although the subtitle “The 1996 – 1997 Archives” seemingly indicates it was actually recorded two decades earlier. It sounds that way listening to “You Model, You Dance” because I’m certain that Kurt used the exact same Quincy Jones “Slam City” sample that Chino XL raps over on “No Complex.” That’s not a complaint. To me it’s a brilliant flip and I’m glad more than one person made a song out of it.

Kurt’s timeline for the album falls apart when you hear “Kool Keith live, 1998, New York City, all the way out to California” in the intro to “Black Sheriff.” Perhaps he forgot that this previously unreleased track wasn’t from the years he indicated, but surely he would have listened to it and changed the subtitle before releasing it… right? Then again knowing Kool Keith he may have actually been recording this song in 1995, talking about 1998, because he’s certainly picked future years as the setting for tracks before. Speaking of calendars, “Happy New Year” got my attention when Keith opened it by talking about a show “Live From Las Vegas (starring) Ron Hightower and Shawn Michaels.” Now THAT would be interesting.

One of the biggest strengths of “Your Mom Is My Wife,” aside from the fact KutMasta Kurt is behind the boards, is the fact the entire presentation clocks in at only 23 minutes. One minute longer would have been too much. By “Me and You” we’ve reached the peak of Keith’s obsession with pornography and scatology from that era, and I’m no longer interested in hearing about his turn-ons whether real or imaginary. “Hand me my rubber silk robe, black mask/I’m smooth undercover, butt cheeks in my face/Between buns is lace — I’m ready for Purina/and eager how your cat taste.” You can’t help but feel like Keith is sharing details you didn’t really want to know. “I’ll stick to you close like the wig on your head/after all it’s yours, I bought it.” OH-KAYYYYY.

That’s Kool Keith for you. He never walks a fine line between good taste and vulgar excess — he tramples it, dances all over it, then urinates on it. KutMasta Kurt is fully aware of it and makes the most of it when they work together, and if “Your Mom Is My Wife” represents the best of what we haven’t heard from them already, I’ll take it. I suspect going beyond what he dug out of the archives for this album would have degenerated into D-grade adult film material that didn’t do either artist any favors.