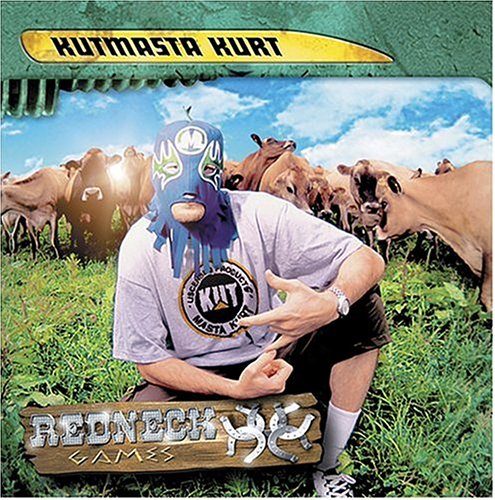 Hardcore hip-hop music heads need no explanation on who KutMasta Kurt is. For the rest of the public though, his name and his album “Redneck Games” may both be a little mystifying. That’s exactly the way Kurt likes it though. There are few producers today who can be said to be as eclectic as Kurt, both in the types of songs he creates and the type of artists he works with – Prince Paul maybe, or the continually rising star of Madlib. Nevertheless though Kurt stands head and shoulders above many of his musical contemporaries in a category that could undoubtedly be called “rap’s elite beats.” A KutMasta Kurt production may not be as easy to quantify as a DJ Premier or Pete Rock beat in terms of it’s sound, but there are certain qualities that always shine through in the production – clean beats, tightly woven melodies, beats that always boom bap and an ear for putting together that next shit.

What images would your mind create when the idea of “Redneck Games” came up? Empty beer bottle stacking. Towing a mobile home with your bare hands. Chucking cowpies for distance. (If you don’t know what a cowpie is, trust me, you don’t want to know.) Hog calling. In short, your mind would conjure up a whole bunch of stereotypes that might best be found in a “Blue Collar Comedy” sketch. And while the self-described “funky redneck” may be whiter than your Liquid Ink, his music is damn near impossible to stereotype. Some might be tempted to classify him as a guy who creates esoteric beats for obtuse MC’s, given his long association with Kool Keith and co-horts like Motion Man. You’ll find both playing in the “Redneck Games,” on the “I Don’t Believe U” remix and “Show Up for Practice” respectively. Some would say he has an affinity for the West coast’s elite verbalists, and indeed his most famed track may be the Dilated Peoples smash hit “Work the Angles.” You’ll also find him rocking songs with Del, Planet Asia, Rasco and Blackalicious throughout the album.

If that’s all you know of KutMasta Kurt though, you’re just barely scratching the surface of the many surfaces he has scratched. One of the best tracks of the entire album is his “In the End” remix for Linkin Park. That’s right – those same rock’n’roll white boys you didn’t take seriously because you thought Mike Shinoda had no business rapping. Limited minds see limited things though, and for KutMasta Kurt there’s no limit to what sports a funky redneck can play. That’s why just when you think you’ve got him pegged, he’ll drop a classic beat for Philly born Grand Agent on “Every Five Minutes” or create a banger for the legendary PMD on “Straight From the Heart.” Personally speaking, I was very pleased to see what might be my all-time favorite KutMasta Kurt production featured on this album – 7L & Esoteric’s classic “Rest in Piece.” The beat is positively epic in it’s use of strings, riffs and drums. What makes it even sweeter though is the scratched in lines like “death is the final step” by RZA and “you know dead rappers get better promotion” by Jadakiss, along with Esoteric’s hilarious rap:

“Check.. now as I look down, it’s kinda tough swallowin
the fact that I’m a dead rapper with a cult followin
Legions of fans got their hands on my old jams
And new fans, they were sayin ‘Oh damn!’
at every punchline, and now the rumors break and hit
Cause everybody knew that I was workin on some new shit
Cats askin, ‘Who’s on it? Who produced it?’
Straight up, just ask deceased, let the man {“rest in peace”}
All my old friends are now sayin that’s a spiritual
My mother wants my material
Girlfriends sayin that I’m lyrical, fightin over rights
Sellin R.I.P. t-shirts at open mics
Fans thought the East/West was comin to South
Got the Source van in front of my house”

The fact that “Rest in Piece” is immediately followed by Planet Asia & 427’s “Bringin it Back” remix is as much proof as you’d need that Kurt is dope. While the last track was a straight street banger with Esoteric providing the comedy, “Bringin it Back” seems to be almost the reverse – giving a crazy ill gem dropper like Asia who calls himself “a pro black radical [that] walk mathematical” an uncannily light-hearted bounce track that sounds ripped straight out of a nursery rhyme song. Would you think that shit could work? It DOES. Complete with scratches from Freddie Foxxx on the hook saying “real niggaz on the mic bringin it back,” it’s as hardcore as anything you could think of. KutMasta Kurt seems to work on some mental level that exceeds the norm for creativity, putting things together that other people would not only not imagine being dope together, but would never even THINK OF. Whether you’re snapping your fingers to the pulsing orchestra of Rasco’s “Ready to Rock With Us” or getting down to the old school throwback beat and hard rocking riffs of Resorte’s “Brota” remix, there’s nothing at these “Redneck Games” you wouldn’t want to hear twice. Far from being a joke in any way, Kurt’s competitive nature shows through in these “Redneck Games,” a sport he aims to win simply by being on that next shit while everybody else is trying to sound like Kanye West. And don’t get me wrong, Kanye West is the bomb, but too many people think putting a soul record on 45 RPM guarantees them a hit. Try REALcreativity. Let the “Redneck Games” be your guide to greatness.