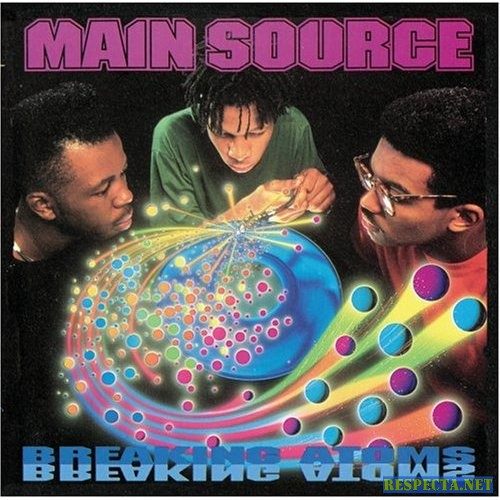 First cue up the funky, obscure piano sample, then the short, muted guitar strokes. Then cut that and layer the various-pitched voices, whispering “snake eyes.” Add the most lush baritone saxophone and clap-along drums, and you have yourself an instant album-opening classic. Now pick up your trusty SP1200 and create it yourself. Sounds simple, right? Well, it’s not. Arguably the best to ever construct a beat, MC and producer Large Professor (also known as Extra P, LP, and The Mad Scientist) and DJs Sir Scratch and K-Cut pulled this trick and other equally admirable accomplishments on twelve tracks on what can now safely be called a perfect album.

If ever there was a “slept-on” classicâ€”as hip hop fans fondly refer to their unheralded favoritesâ€”that album is undoubtedly Main Source’s “Breaking Atoms.” Though many rightfully acknowledge “Breaking Atoms” to be on a similar level to Nas’ “Illmatic” (at least in terms of production) or any of A Tribe Called Quest’s first three albums, those fans are generally bred of the old school, and for everyone one of those fans there’s a dozen new jacks who don’t know the deal.

To put the impact of this album in perspective, let’s clear up one important fact: Yes, “Live At The Barbeque” features the debut raps of a young emcee from Queens named Nasty Nas, and no, it’s not even close to the best track on the album. The sounds heard on these twelve tracks are perhaps as vibrant and attention-grabbing as the rainbow of energy shown on the album cover.

From the first opening grooves of “Snake Eyes” to the funky bass of the tormented love track, “Looking At The Front Door,” Large Professor’s fingerprints are all over this release, and, luckily for us, all the other tracks are just as engaging. The sunshine vibes are the perfect backdrop for some braggadocios rhymes from the Scientist himself, on the bluntly-titled “Large Professor:”

“Your brain is simple and reveal while mine is sealed
Coming up with the archeological finds
Funk drums allow me to spark you with rhymes
The mic’s my instrument, my skills are infinite
Catch a hint from it
Because it’s the Large Professor”

Making the seamless transition from the playful, battle-oriented, LP takes on all the crooked cops of the world with the gloomy “Just A Friendly Game of Baseball.” While the metaphor seems like a bit of a reach, it’s poignant nonetheless with memorable lines such as: “Instead of innings, we have endings,” “Babe Ruth would have made a good cop, but he didn’t / Instead, he was a bigot â€“ dig it!” and “R.B.I.: Real Bad Injury.” Though LP wasn’t the first to combine dope beats with intelligent and socially conscious rhymesâ€”artists like Rakim, Public Enemy and KRS-One were veterans by 1991â€”there is an intangible charm to his relatively rudimentary flows and delivery that make his raps particularly enjoyable, much like Q-Tip or Phife Dawg of A Tribe Called Quest, neither of whom were awe-inspiring lyrical technicians, but remained fan favorites nonetheless.

Speaking of A Tribe Called Quest, a group with which Extra P was friendly and closely associated (his production on “Keep It Rollin’, from “Midnight Marauders,” remains a classic to this day), many argue the two maintained a symbiotic relationshipâ€”at least in terms of musical influenceâ€”as evidenced by his Q-Tip-esque, abstract imagery, such as “Now all you rap clowns, let’s go seven rounds / And put down your imaginary frowns” from the jubilant, Latin-flavored “Vamos A Rapiar.”

Much in the same intelligent, observant vain as “Just a Friendly Game of Baseball” is “Peace is Not the Word to Play,” Large Professor’s calling-out of the hypocritical usage of the word peace by those who engage in violent activity. Once again, the power of this message obviously impacted ATCQ, as they would later address a similar topic in the misuse of the word nigger in the African-American community on the “Midnight Marauders” LP. The message is not preachy or contrived, though. Instead, there is a conviction and certain level of despair in these tracks which make them all the more engaging and expressive. Like any other well-spoken activist, Large Professor doesn’t command that you agree with his views, rather, just that you hear him outâ€”and through his beautiful work, makes it that much more enjoyable.

Not to be forgotten on “Breaking Atoms” is K-Cut and Sir Scratch, who get their turn to shine on the tables on the instrumental “Scratch and Cut.” Exactly what function they served in Main Source is still somewhat of a mystery to this day, much like Jairobi of ATCQ, or more recently, Shay of N.E.R.D. While the majority of the production credit goes to Large Professor on this release, Cut and Scratch later released an album sans Extra P, which was pretty good in its own right. Nonetheless, their frenetic work on the turntables throughout nearly all of “Breaking Atoms” are as vital and blend as effortlessly as a guitar or bass to a rock outfit.

The cover art and title of “Breaking Atoms” are about as accurate as one can find. Crude high school chemistry teaches us that a tremendous amount of energy is required to split an atom, but once that is achieved, the subsequent release of energy is even greater. No one who has enjoyed or engaged in hip hop since the 1991 release of this album has done so exempt from the wide-ranging influence of this albumâ€”knowingly or otherwise. Easily on par with production-revolutionizing releases like Dr. Dre’s “The Chronic” or Pete Rock & C.L. Smooth’s “Mecca and The Soul Brother,” “Breaking Atoms” is owed a serious debt of gratitude by any and all who have felt the power of the art form.

Though the beats are the cornerstone of this release, the lyrics are equally enjoyable and crucial to its success. No disrespect intended to K-Cut and Sir Scratch, but “Breaking Atoms” is ostensibly The Large Professor show. Often times ranked behind contemporaries DJ Premier and Pete Rock, and even Jay Dee and Ali Shaheed Muhammed by some, Extra P’s best work is easily just as good, and in fact, the rumors have never died that he assisted in some form in the producing of Pete Rock’s “They Reminisce Over You,” often times regarded as the pinnacle of production achievement in the annals of hip hop. Main Source never released an album comprised of these three again, but they didn’t really have to, because the hip hop world was never the same before or after “Breaking Atoms.”