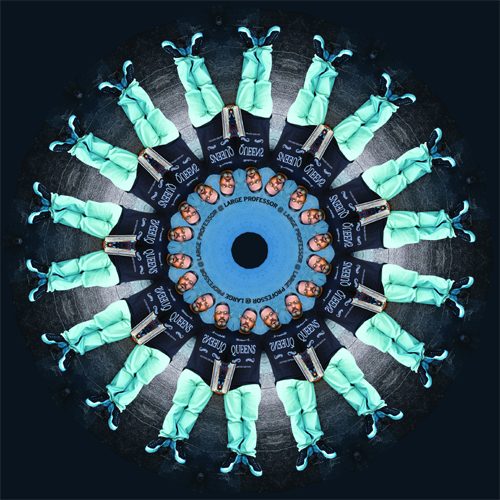 William Paul Mitchell b/k/a Large Professor has picked up his output level slightly in the last few years. We went 10 years from the break-up of his rap group ’til the release of his official solo debut “1st Class” and bootleg release of “The LP.” We then went another half decade+ until he decided to drop an album wryly titled “Main Source,” but since then he put out an official version of “The LP” and dropped this brand new album “Professor @ Large.” By my math, since I’ll count the official version of “The LP” as a new album, that’s three releases from Extra P in the last five years. That’s not what you’d call prolific for anybody OTHER the Professor, but given how reticent Mr. Mitchell is, that’s as close to it for the P as we’ll ever get.

Paul is famous for different things depending on who you ask or what part of his career they’re familiar with. He’s definitely a wizard behind the boards, famous for his contributions to classic rap albums like “Let the Rhythm Hit ‘Em” and “Illmatic.” For some though his contributions as a lyricist in that same era loom even larger, famed for rap songs like “Just a Friendly Game of Baseball” and “Looking at the Front Door.” In my mind I’d prefer to give him credit for both, but in truth his rapping took a backseat to production for so long that a cameo rap or a 12″ single in the 1990’s was a rare event. Even with the turn of the calendar to the 21st century and several solo albums under his belt, that’s still a hard image for me to shake.

Listening to “Professor @ Large” the beats are the first thing I’m checking for, and for the most part I’m satisfied. He even takes the time to drop a few instrumental-only joints such as “Barber Shop Chop.” It’s definitely the kind of mellow groove you could get your head buzzed to. “Sun, Star & Crescent” has the trademark echoing drums you expect from a Large Pro beat, and it’s not hard to put your favorite emcee in your head freestyling a verse over his groove. “Back In Time” is exactly what you’d expect – a throwback to the kind of sound effects and flavors that could be heard on “Breaking Atoms” or “Step in the Arena” back in the day. When he does rap, he’s not afraid to spread the wealth and share the mic with his peers. “Straight From the Golden” features Busta Rhymes, “Mack Don Illz” (a personal favorite) features Grand Daddy I.U. and Mic Geronimo, “M.A.R.S.” is a who’s who of underground favorites from Action Bronson to Saigon, Cormega and Tragedy bless “Focused Up,” and even Lil’ Fame from M.O.P. gets a piece of the action on “Happy Days.”

Unfortunately I wish I had more to say about Large Professor’s rhymes. Even when he flows to a Marco Polo beat on the title track, I’m left underwhelmed. It’s sad to say he’s got the same problem he had on “1st Class” a decade ago but it’s true. Corny lines like “I got the vaccine for whack shit” and “crazier than crack rolled up in a White Owl” don’t cut it. Perhaps even more annoying is that the track that follows it “Light Years” winds up being a cock tease for the Pete Rock remix of Public Enemy’s “Shut ‘Em Down,” leading me to expect something better than what’s delivered musically (although it’s one of his better performances of the album lyrically). I still have the utmost respect for the Professor, and “Breaking Atoms” will always be a quintessential rap classic, but when it comes to his solo shit now and forever more I check for the background sounds first and the rhymes last.