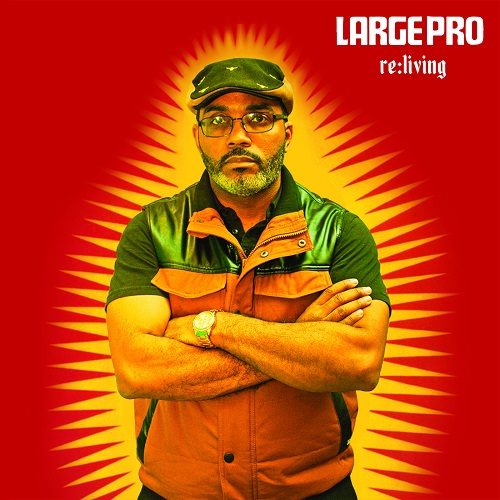 Large Professor is one of the few Hip-Hop producers who hasn’t strayed from his original sound. Check out his record “The LP” which was supposed to be released in 1996, and then put on his latest release “Re:Living” – they aren’t that different. Put a Preem or Pete Rock beat on from the 90s, and it’s definitely distinguishable from their recent work, helping to highlight just how timeless Large Pro’s sound really is. He rarely gets mentioned in the same sentence as Premier or Pete, and that’s a damn shame.

Of course Large Professor hasn’t built up classic full-lengths outside of the Main Source album “Breaking Atoms”, but being a key component to “Illmatic”, arguably the greatest Hip-Hop album ever made, is not to be sniffed at. 1996’s shelved “The LP” could have been remembered more fondly than it already is, had it been released at the time, which leaves many citing his follow-up “1st Class” (released in 1999) as his best work.

The new album highlights why Large Pro isn’t quite as well regarded as Premier or Pete Rock. Every Large Pro album has one corny joint, and “Re:Living” is no different. “Off Yo Azz On Yo Feet” is 2015’s “Hot: Sizzlin’, Scorchin’, Torchin’, Blazin'” (remember that?), which shows up Xtra P’s limited song writing skills. I know, I know, “Large Pro albums are about the beats man!” – and they are largely on point. “Opulence” is classic Pro, as is “In the Scrolls”, a track serenading Nas.

Large Pro is absent from the posse cut “Industry Remix 2” which features some of the most underwhelming verses from Sadat X, Roc Marciano and particularly Lord Jamar (who’s clearly been spending too much time on DJ Vlad’s couch, as he punches-in EVERY bar). Cormega does his thing and Inspectah Deck goes off on one of his angriest rants on the industry that I’ve ever heard. It’s odd to state this but it would have benefited from Large Pro’s presence just to bring the insanity in to check.

“Re:Living” is very much a typical Large Professor album, boasting a few excellent productions and a hefty amount of filler highlighting Pro’s easy-to-listen-to vocals can fall flat if the beat’s not perfect.