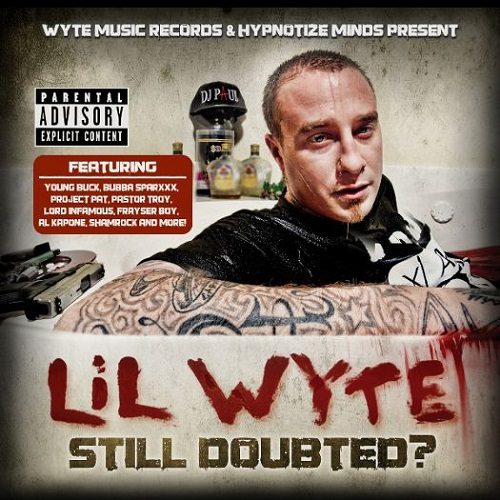 Lil Wyte (government name: Patrick Lanshaw) has a 10 year career under his belt and should rightfully be proud of that. Many people doubted that he’d have a long tenure, assuming that he was the “token white boy” of the internationally famous and award winning Three 6 Mafia, and once they were done fucking around with him as a side project he’d simply disappear. Wyte has consistently proved his doubters wrong though, repeatedly moving hundreds of thousand units largely without radio play of any kind. Word of mouth, a loyal fan base, and his continuing friendship with Three 6 are all he’s needed to stay relevant and independently successful. He’s even a budding entrepreneur, turning his name in music into his own label, Wyte Music Records. Fortune has indeed smiles on this former two-time high school dropout who can look at his daughters now with pride – daddy made good.

2012 is an interesting conundrum though, because the marketplace for music has changed, and the Hypnotize Minds website no longer seems to exist. Wyte freely acknowledges in the credits of “Still Doubted?” that he owes his existence to them and is thankful for the opportunity they provided him, but neither DJ Paul or Juicy J is on this album musically or lyrically – no production or cameos. One could say that’s because they’re hard at work on their newest album “Laws of Power,” but that album has been delayed and postponed so many times I am legitimately skeptical it will be released in 2012.

Perhaps then it’s better that Wyte is not counting on them for help, but that doesn’t explain why former Mafia members are here instead: Lord Infamous cameos “Welcome 2 the Gathering” and Frayser Boy is on “Gun Down.” Given both have strained or tenuous relationships with the Mafia, one might think Wyte’s relationship with his mentors could also end up strained by association. Still the Hypnotize Minds imprint is on the album, so in the end it’s probably all good. I’m not trying to start any rumors, so don’t quote me out of context and imply that Wyte’s relationship with DJ Paul and Juicy J is anything other than good. Let’s get back to the music, such as the song “M.E.M.P.H.I.S.”:

“Welcome to Memphis, Tennessee
I am the white man that runs this hoe
If I could give you a tourist tip I hope you brought a gun in this hoe
Not too much money though a little bit of dough
Don’t ride too clean, don’t put on no show
If you got a bad bitch, better leave her at home
Cause a Memphian is gon’ take what he wants
And that means yo’ car, or even yo’ wife”

Wyte speculates that “maybe it’s something in the water that makes us all lose our marbles” in Memphis, but on songs like “I Do It” there doesn’t seem to be anything wrong with his faculties. In fact lyrically he sounds about as sharp as he has at any point in his career, and he’s been in this rap game for long enough now he’s got valuable information he can share:

“My train of thoughts might slow down, at times then I get restless
sometimes that I don’t wanna write raps, and I question
what the FUCK am I doin in this game, is there a lesson?
Or am I just makin a livin preachin as I’m stressin?
I’ve met about a million of my fans, shook hands
and every one of ’em in they own way, have told me I’m the man
So I take that in consideration whenever I am writing
And let ’em know I’m two times stronger than ten million bolts of lightning”

I’ve always respected the hell out of Lil Wyte’s hustle, though at times I’ve been a little skeptical about his contradictory messages and tendency toward repetitive topics. I’d like to say “Still Doubted?” answers all of the questions, but even though I respect his game there are flaws that need to be addressed.

First and foremost, this album is just TOO LONG. Much like the prescription medications he brags about using (and abusing) on record, only a properly measured dose for the right reason achieves the effect that’s intended by the manufacturer. 20 tracks and 75 minutes later Wyte’s voice is starting to grate on me. One of the problems with being a self-made entrepeneur is that there’s nobody to say “no” when you hit the studio for just one more song. I’d like to suggest the removal of all of the following would have made this album stronger: the “Intro” “Interlude” and “Outro” skits, “Get Em Out of Durr” featuring Partee, “Sike” featuring Miscellaneous (what a terrible rap name) and “Yea Hoe” featuring Shamrock – none of these additions benefit him.

Second and more importantly, the Memphis rap sound is not as prevalent today as it was in years past, and his reliance on that production style starts to sound both dated and a little bit repetitive. The producers aren’t named in the liner notes (only executive producers Patrick Lanshaw and Rashard Partee get any mention at all) but that’s probably for the better. Some songs do break through the wall of repetitive tempos and tones – “Sold My Soul” featuring Pastor Troy, “All Kinds of Drugs” featuring Lil Will and Young Buck, and “Lesson Learned” among them. The sheer abundance of material though makes it easy for the high notes to get lost in the mix, whereas on a 10-14 song album, they’d stand out a lot more. Wyte deserves the credit for sharpening his rhymes, which after a long and successful career he didn’t necessarily have to do, but it’s time to change up the sound a little for the 2010’s. The loyal followers who have NEVER doubted Lil Wyte will be pleased though, and with his hustle, he’s not going anywhere.