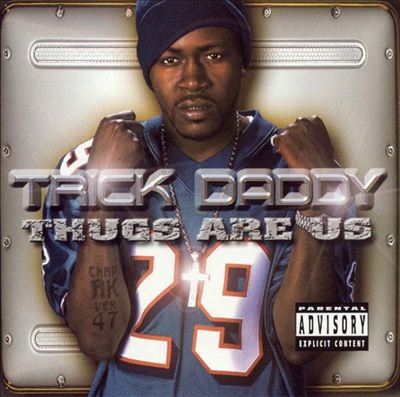 Trick Daddy :: Thugs Are Us

The artist formerly known as Trick Daddy Dollars is back one mo’ gen to represent for Dade County with his “Thugs Are Us” album. For the past several years Trick Daddy has been a fixture in the hip-hop community, from his humorously titled “www.thug.com” to last year’s underground favorite album “Book of Thugs: Chapter AK, Verse 47.”

If you heard the last album, you might catch deja vu when you get to the next to last track, “Amerika.” The motivation for including this song on his new album is only natural, since it was the most recent single before the smash hit “Take it to Da House,” but they could have at least presented it as a remix. They have no problem doing the same to Trina’s “Pull Over” track, with an old school beat that is sure to bring a smile to anybody who’s been knowing rap for years.

Back to the album – if you already know Trick Daddy, you know that socially motivated songs like “Amerika” tend to be the exception, not the norm. That’s not that he doesn’t care about the shorties (this album’s “Intro” proves that) but he’s making thug music that’s strictly about the pursuit of illicit profits and conspicous consumption. You can’t judge Trick Daddy as though he was going to say something monumental or philosophically deep – his music is best appreciated as a pure exercise in carnal audio consumption. As such many of this album’s tracks succeed: his remake of Ice-T’s “99 Problems”, the slumped beat of “Bricks & Marijuana” featuring Kase, the up-tempo “For All My Ladies” with Trina and more.

This album isn’t quite as consistant as “Book of Thugs” though. “Noodle” has an uninspiring beat and the cameo from Tre+6 doesn’t really impress. “Have My Cheese” has a good bassline but the keys played throughout are too reminiscent of Swizz Beatz. Most of all “Somebody Shoulda Told Ya” that the rapper named Migraine was really just a bad ripoff of Mystikal. Skip WAY over this track.

The tracks that feature Trick Daddy tend to be the strongest, and the tracks that feature Slip-N-Slide rappers other than Trina tend to be the weakest, with the exception of “Take it to Da House.” The insert for this CD says that Trick will release a SECOND album “T Double D” later this year. By building on this album’s strengths and avoiding it’s weak spots Trick can surely release an album as good or better than last year’s “Book of Thugs” – this LP won’t quite do it though.