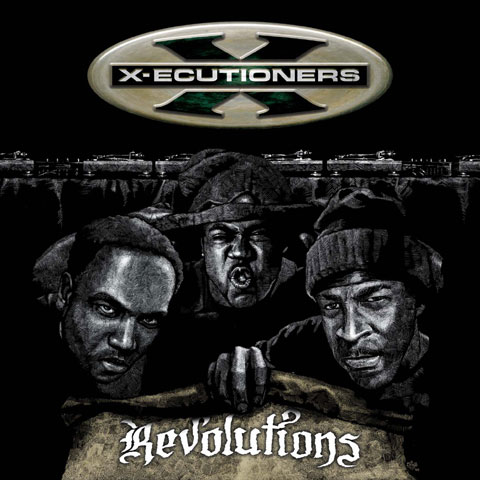 Mista Sinista, Rob Swift, Total Eclipse, and Roc Raida. Individually, they are the among the world’s best DJ’s. Collectively, they are much more. They are the X-Ecutioners. The name sounds gangsterish, and it should. Inferior DJ’s should be intimidated by their ability to slice records, dice beats, cut up samples and slay you with the scratch. On previous releases like “Built From Scratch” and “Scratchology” they’ve not only showed off the vinyl manipulating skills to pay the bills, but paid tribute to the classic scratchmasters who paved the way for them to do their thing today.

“Revolutions” is their most ambitious album to date. While these kings of cuts have always been trendsetters in experimenting with new styles of hip-hop, these tracks will be eye openers even to their long-time fans. The cover of the album boldly announces that “Revolutions” includes “(Even) More Human Than Human” by Rob Zombie and Slug (from Atmosphere). For those not familiar with Rob Zombie, suffice it to say that he’s not a rapper of any sort despite the intimidating moniker. His genre is hard rock, with a grungy edge, and that’s no pun on the “Never Gonna Stop Me” theme song he did for the WWE wrestler Edge. This track is not something to be afraid of though. Slug’s jelly and Zombie’s peanut butter go together quite well; not unlike when Butch Vig hooked up with Everlast for a hard rock remix of “Shamrocks and Shenanigans.”

There’s plenty of unusual and funky collaborations to be found on this CD. “The Countdown Part 2” is a duet between the X-Ecutioners and the Blue Man Group. Yes, the same guys who paint their faces blue and catch marshmellows in their mouth. To be honest this reviewer is not really sure what their musical contribution is to this track, but it’s obviously good since combined with the turntablist skills displayed it’s fresh as hell. “Like This” featuring Annike sounds like a 21st century look at the B-52’s “Love Shack” style, and it works. The list of more recognizably hip-hop guests is as eclectic as eclectic gets. On “Live From the PJ’s” you’ll hear Ghostface Killah, Trife and Black Thought getting down together. “Back to Back” stars underground rap favorites Scram Jones and Saigon. “Get With It” has Cypress Hill throwing down blunted rhymes, and “Sucka Think He Cud Wup Me” features political gangsters Dead Prez.

Throughout this mixture of varied hip-hop genres and styles, the common denominator is always the production skills and vinyl spinning abilities of the X-Ecutioners themselves. It’s this singular fact that makes it their album, and not a slamming hip-hop mixtape – which it honestly would be anyway. Still for the turntablist at heart there are some pure Technics manipulating songs showing their mastery of the arts, like “C’mon” and “Old School Throwdown.” There’s also humor in the mix on interludes like “Skit 3” where they invent an absurd show called “SpringFest” and make a “commercial” featuring the artists who you can see there, like the beatboxing reggae stylings of “Sleepy Edie.” It’s this sense of whimsy, an unrelenting desire to create original material, and the unparalleled level of perfection their DJ skills have reached that makes “Revolutions” an album you’ll want to keep spinning for the rest of the summer.