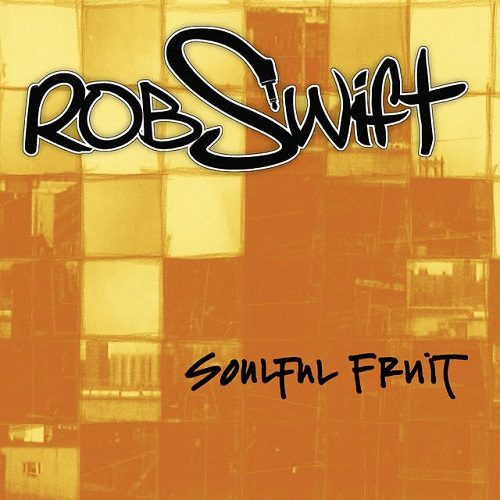 Turntablism has taken huge strides in recent years as the DJ is increasingly being recognized as an entertainer who can stand alone without the aid of an emcee. While DJs have long been recognized for their skills at playing other people’s music, the idea of the turntable as an instrument in its own right has only recently began to gain mainstream recognition. The X-Ecutioners have led the turntablism movement as they have become international stars since releasing “Built For Scratch.” Due in large part to their emergence, today you can find turntablists from all coasts getting record deals. One of the first, if not the first, turntablist record to be released officially was Rob Swift’s “Soulful Fruit,” which dropped on Stones Throw Records back in 1997. In the 8 years since, the record has become increasingly scarce. Looking to remedy this problem, the folks at Fat Beats Records have taken it upon themselves to re-release the album. The album cover has been changed for the re-release, but Swift’s funky soul loops and ill scratching remain in their entirety.

Those down with turntablism since day one are probably very familiar with this particular record and Rob Swift’s style overall. Newer fans, especially those who just got into the X-Ecutioners, will probably be in for a small surprise as “Soulful Fruit” is far removed from the energetic and genre-mashing X-men records of recent years. The album title is an apt description for the mix contained within as Swift mixes funk and soul loops with occasional scratching and interludes. Rappers only show up once for a full verse on “This Is A Remix” where Swift takes the original soul loop to make a fresh remix of Black Moon’s “How Many Emcee’s.” The concept of reproducing classic Hip-Hop beats using the original loops shows up a few times on “Soulful Fruit” and makes for an interesting history lesson.

Aside from schooling heads and pleasing crate diggers, “Soulful Fruit” also provides plenty for the average hip-hop fan. “Diamond Jay Will Spin It” features precise cutting from original X-man Diamond Jay. Scratching at almost a frantic pace, Diamond Jay shows why he’s been the DJ of choice for plenty a classic hip-hop act. Mista Sinista shows up on “Who Is It” and gives Swift a run for his money, scratching a sick Method Man sample and beat juggling with expert precision. If that wasn’t enough to entice you to peep this album, “Rob Swift Versus Rahzel” should do the trick. Often dubbed “Man Versus Machine,” this track features a live capture of the time Rob Swift challenged Rahzel to match his scratch routine using only his beatbox skills. This track alone is probably worth the price of admission alone as it exhibits the best of both turntablism and beatboxing.

Rob Swift’s head-nodding loops and impeccable turntable skills definitely make for a solid mix, but in the end “Soulful Fruit” isn’t the perfect mix. Swift’s emphasis on soulful selections wouldn’t usually be detrimental, but at times the mix seems to stumble momentarily. Certain tracks, like “Relax Mode,” drag on for a bit too long and get boring before they get relaxing. Even with a few minor missteps, “Soulful Fruit” is still a cut above anything released then or now. For those who absolutely need a rapper to go with their music, “Soulful Fruit” isn’t for you, but those who can appreciate the music and the musician behind the rapper will find Rob Swift’s debut both entertaining and surprisingly innovative for its time.