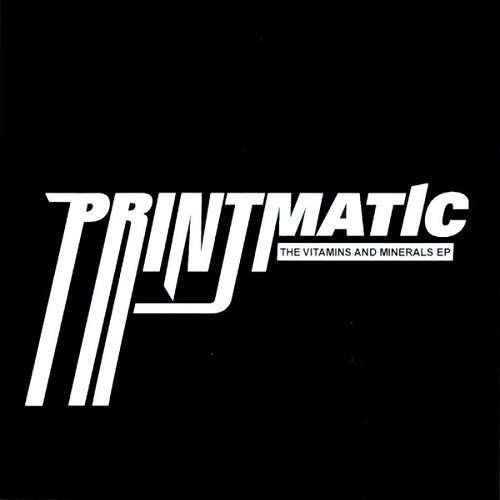 Printmatic :: The Vitamins and Minerals EP

When you try to make your way through the jungle that is popular music, chances are that like in the South American rain forest, an explorer can search all his life and still discover a new species every day. That’s why it is with a clear conscience that I admit that even though Blueprint is at home in my neck of the woods (hip-hop and stuff), he has completely passed me by so far. Which means I haven’t heard him rap over RJD2’s beats on Soul Position’s “8,000,000 Stories”, I haven’t heard his beats for Illogic’s three albums, I haven’t heard his solo joint “The Weightroom”, or his group efforts with Greenhouse Effect. But thanks to the growing database that is RapReviews.com, I can see that those of my colleagues who have come in contact with Blueprint had only good things to say about him.

While I’m happy to be finally introduced to Blueprint, I don’t know quite what to say about this here “The Vitamins and Minerals” EP released under his alias Printmatic. In regards to Print’s own career, I have no reference point whatsoever. This, when reference points would come in particularly handy, since this release seems to be directed at an already existing Blueprint clientele. According to the label, it is a tour-only CD limited to 1,000 copies. A news update on their website from a month ago goes on to state: ‘Once they’re gone they’re gone – there will not be a repress. Since this EP was late getting back from the plant and wasn’t available for the first half of the tour, copies have been sold to sandboxautomatic.com, hiphopsite.com, and undergroundhiphop.com. For those who have been waiting to pick this EP up, please don’t wait, it’s been available less than a month and at the pace they’re moving they won’t be around much longer. For everybody else that misses them, Blueprint will keep some around for the only solo show he’ll be doing this summer – the Scribble Jam.’

There you have it. For the sake of a complete coverage of Blueprint’s discography at RapReviews, I will still go over it with all due care. “Vitamins & Minerals” is a short intro that features Print complaining about how hard it is “to make art admist the artificial / that somehow forgot about how to be original,” only to resort to the common aggressive rhetoric of “keep talkin’ shit, I’ll diss you / probably in person, make it even more official / turn into Ike Turner till somebody blows the whistle / then and only then will I stop smackin’ crews / who thought they was runnin’ shit, but only in the bathroom.”

After this rather mundane introduction, the EP properly takes off with “Time Management (Revisited)”. A mid-tempo arrangement of feedbacking guitar riffs serves as the backdrop for Blueprint’s engaged but precise flow. Lyrically, the song features some interesting adaptions of metaphors, from…

“Weightless will never fall, so end all resistance
There’s already way too much drama in this business
The character assassin leaves no witnesses
Pleadin’ innocence to the judge and the jury
Temporary insanity was the fuel behind my fury
I threw the book at the judge and got rushed by security
Spent 90 days in hip-hop hell
and would still be there if Inkwell didn’t post bail”

For the final quarter, the “Time Management” remix highlights Blueprint’s beatmaking chops, as he introduces a foreign female voice sample into the mix, making you realize that this could have been an interesting instrumental joint just the same. On “Yo Yo”, Print is joined by fellow Greenhouse Effect member Manifest. Over a structure of heavy drums and other assorted chunks of dark sound, they attack the track with an energy most underground rappers couldn’t muster.

“One Step for Every Tear” is an introspective spoken word piece over a ghostly, movie score-like track. Print takes a quite surprising, unforgivingly close look in the mirror on this one. “Catch 20” (featuring Plead The Ph5th and CJ The Cynic) and “Holding Tank (Revisited)” turn that look outward, describing urban despair in great detail with widely different means, lyrically and musically. Rounding off the EP is “Hold Mine”, a posse cut gathering Blueprint, Slug, Aesop Rock, Eyedea and Illogic, collectively known as The Orphanage. In the words of Print: “The Orphanage, God, a quality crew.” It may not come across very organized, but thanks to a sharp beat and its mere lyrical talent, “Hold Mine” is a worthy grand finale for this EP.

After 25 minutes of Print, there is little doubt that the man has a whole lot to offer, beyond what he reveals here. Those of you who’ve already run into him are likely to recognize the Blueprint they’ve come to known. For us others, “The Vitamins and Minerals EP” is a firm first handshake that won’t yet reveal his entire personality, but might very well lead to a closer relationship.