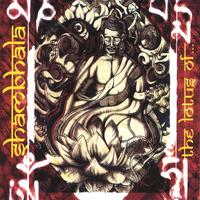 Shambhala :: The Lotus of…

Shambhala is on some spiritual shit. For real. When you look up the term Shambhala on the web you get a bevy of sites about spirituality, meditation, and creating an enlightened and aware culture/society based on Buddhist traditions – hence Shambhala. The artist is no exception either. If you visit the 199 Records website and look up the artist bio, you don’t get information about who they are or where they come from – you get proverbs from Zen Master Ejo’s book “Absorption in the Treasury of Light.” Definitely a change of pace from your average everyday type rapper.

The album itself, “The Lotus of…” has a strange and vaguely mystical title. The lotus of what? Here again some insight can be gained from researching Buddhist culture and traditions. According to texts online it is one of the eight symbols (I haven’t the slightest clue what the other seven are) and it is meant to represent faithfulness. I could only assume then that the Insane Clown Posse affiliate known as Dark Lotus is meant to represent faithlessness, but perhaps one can read too much into these things. Nonetheless the trailing ellipsis at the title’s end does serve to imply an open-ended journey. If the lotus represents one’s faith and devotion, then it may be that “The Lotus of…” is for Shambhala not only a spiritual quest but an attempt to keep the faith of hip-hop music and culture against the materialism which often seems designed to weaken it.

Production is handled by a variety of cats throughout the album, but all seem to have agreed on a mystical, Eastern influenced theme and style. This isn’t as simplistic as Timbaland looping from Bhangra music to make crossover hits though (and I’m not knocking songs like “Big Pimpin'” because actually I think they’re quite catchy). Rather it’s a whole way of informing the sound on “The Lotus of…” from start to finish with sounds, instruments, samples and styles largely unfamiliar to the Western experience. The closest one gets to traditional hip-hop is the Young Raven produced “African Sunflower,” and it’s still got a spacy sounding instrumental which is punctuated in the chorus with samples but otherwise carries you like a leaf floating down from a tree in a gentle summer breeze. The group’s lyrics match it well:

“They say you hurt the ones you love most
I’m in agreement to the utmost
Follow where love goes, just see it up close
Seen in my wife, with this perpetual heartbreak
She looks at me whispers how much more can my heart take?
I whisper back and tell her that it’s not late
We can stop fate, give a third or fourth chance
Bet I can walk straight
I can’t fake, like them other women never meant nothin
I, learned from ’em, so I guess it’s worth somethin but
you the mother of my child, the moonlight above the clouds
of my own lack of wisdom, I adore you”

Clearly you’re not going to hear anybody on Shambhala’s album brandishing large automatic weapons, bragging about the big rims on their cars, or sitting on fat stacks of cash. These are songs built on deep personal feelings and emotions. Raven strikes gold again on “Enlightenment (Arabian Claps),” as the subtitle well describes the infectious beat as the verbals exude confidence yet quip “nothing’s promised so I’m always paying homage.” Damu’s lilting flutes on “Full Moon of the Tao” could be lifted straight from a Metal Fingers album or an RJD2 instrumental. Axiom’s “Divine Intervention” begins with a gong, builds up a buzz worthy of Wu-Tang’s swarming bees, and then gets as lyrically hardcore as any track on this album:

Shambhala is as politically and spiritually active as Zach De La Rocha, except musically stripped of all the doubletalk and pretentious bullshit. As one moves through the many blossoms found musically within “The Lotus of…” tracks like “The Wind” are breezy musically and can sport lyrics like “give food [..] to the homeless” and “fight for the same rights as Malik Shabazz” without seeming preachy, didactic, or coming across as an angle to exploit to sell records. The most pleasant thing about “The Lotus of…” is that it can be appreciated on three entirely different levels – an uplifting musical sound, lyrics that are intelligent and at the same time delivered in an easily accessible format, and a vibe that’s positive without being pussy or weak. Those in need of a diversion from too much bling bling may find Shambhala is just what they’re looking for.