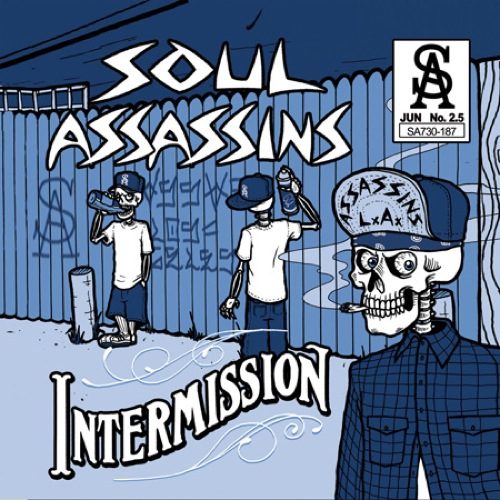 Soul Assassins is back! Or should I say are back? The CD series is back for its third installment entitled “Intermission.” Some of the previous Assassins are back for the third go round, but there is also a fair share of new voices to be heard rocking Muggs’ beats and he wouldn’t have it any other way. For all the platinum plaques, hit singles, and critical praise Muggs has received throughout his career he is still often overlooked when it comes to famous hip-hop producers. Rare is a time you’ll hear a crew not named Cypress Hill brag about their lead single being produced by Muggs. It is odd considering Muggs produced so many classic tracks for the Hill over the years. Though Muggs has expanded in recent years, making whole albums with Gza and Planet Asia, Soul Assassins remains as one of the few opportunities fans have to hear other rappers over his production. This volume has been long in the making, almost 9 full years actually. With expectations flying high, Muggs rounds up a cast of heavy hitting emcees to murder his beats.

The album kicks off with the much anticipated collaboration between Bun B and M1 of dead prez. On paper this combo looked quite dope, in execution it ends up being one of the weaker tracks on the album. Muggs attempts to create a darker, crunk type beat for the rappers but doesn’t quite succeed. The weak beat and average M1 verse don’t match Bun B who is as fierce as ever:

“One for the clip, two for the trigger guard
Three for the sights, I’m super tight, this nigga’s hard
Certified gangsta, ain’t no pretending
Bitch I’m bad to the bone, and tough to the tendon
Catch me bending your corner, coming through on the fly
With my hat down low and my steel up high
Trust me boy you don’t want to go toe to toe with the ratchet
Cause what that motherfuckers in you gonna hate if you catch it
You got stripes? I snatch them hoes right off your lapel
On my motherfucking own, like Patti LaBelle”

The next track kicks things back into gear and is more indicative of what you will find on “Intermission.” Over a lush mixture of samples, Sick Jacken and Evidence deliver a soulful track. “Classical” may be the highlight of the album with Sick Jacken coming especially hard:

“I’m at the corner street pharmacy
Copping medication for my artistry
That shit opens up my mind honestly
My habit gotta have it I just add it to economies
And black markets, spark it and leave behind the poverty
Mahogany armory tucked cause its hard to be
Living in harmony in streets that beef constantly
I’m just a no name, no fame, but check how my flow bang
The dope game, snort rap lines like cocaine
There’s an old saying, the best are last
I haven’t came up yet so that just means that my descent ain’t fast
I got the hood on my back, but the block on the map
And rap, the street gangs didn’t beef all that
I do this shit to soundtrack them Psycho Realm harmonize with mac 10s
My music is like the anthem for action
Classic material never goes out of fashion
Sick Jacken repping for the army of mass men”

This verse had me checking for my Psycho Realm CDs and peeping if Sick Jacken had a solo album. Sick Jacken also appears on “Rep Yo Shit” with Necro as the group P.C.P.. Much hyped super group La Coka Nostra is also present on the album with “Do It,” a hard hip-hop anthem meant to allow the crew to drop rugged verses. Muggs doesn’t just promote upcoming projects as he shows love to other underground favorites. Critically acclaimed duo, Self Scientific, show up for a stand out track on “Good Evening LA.” Muggs’ rock inspired production sets the tone nicely, but the emcee duo handles the track well. The title track with Rza, Planet Asia, and B-Real is also noteworthy as is Planet Asia’s solo “Like That Y’all” which continues the high quality found on the “Pain Language” LP. “Champions (Remix)” with Prodigy and Big Twin is also a big name feature that delivers a gritty, raw track. Newcomers Fashawn and Cynic are given some dope beats to rock over, but only Cynic shows some fire on “World We’re In.” In the end, Muggs beats deliver on almost every track with only Fashawn failing to take advantage of a dope beat.

“Intermission” isn’t the best album in the series, but it brings plenty of dope vibes to keep fans satisfied. As always, the album serves to satiate underground fans who’ve been fiending to hear their favorite rapper over a Muggs beat. To that end, “Intermission” is very successful and the songs by La Coka Nostra and P.C.P. are well placed marketing tools to keep the hype for those groups growing. The unique combinations we’ve come to expect from Muggs are also present, with the RZA, Planet Asia, and B-Real song being the highlight. Bun B and M1 on a song is also interesting, but the chemistry is lacking between them. Overall, I have to recommend “Intermission” to underground heads looking for some dope music and Muggs fans. Those who never peeped a Soul Assassins CD need to start at the beginning and those on the fence won’t be disappointed.