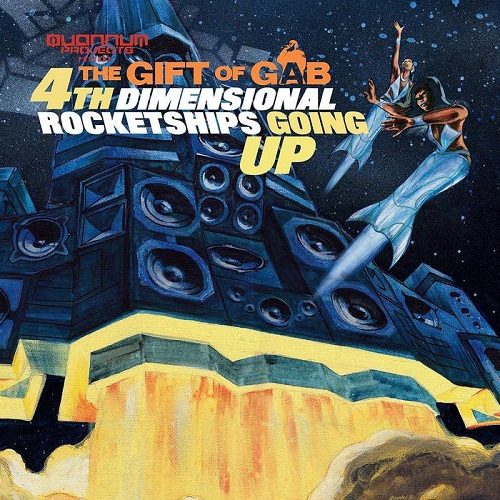 The Gift of Gab :: 4th Dimensional Rocketships Going Up

One might ask if Quannum Projects was the West coast equivalent of Definitive Jux. Then again one might just as easily ask if Def Jux was the East coast equivalent of Quannum. THEN AGAIN one might just as easily not give a fuck either way, since they both release some of the best singles and albums in all of hip-hop. Whether you pick RJD2 or DJ Shadow, Latyrx or the Perceptionists, MURS or Lyrics Born, you really can’t go wrong either way. Both families have purposefully set themselves apart from following commercial trends in hip-hop, preferring instead to work as a collective producing uniquely expressive and artistically fulfulling music. If by chance one should happen to go gold or platinum, it’s off the strength of content, not the strength of the marketing campaign or getting in the top ten of 106 & Park.

It’s all about the skills baby. And when you talk about skills and Quannum Projects in the same sentence, you can’t finish the sentence without saying Gift of Gab first. With over 15 years of lyrical experience under his belt and a cult following in the underground as one half of the group Blackalicious, Gab can be found on any who’s who list of microphone masters. When people say “he’s an MC’s MC” they’re talking about Gab, whose esteem can be measured by the elite word benders that get the same description: Pharoahe Monch, Aceyalone, Ras Kass and Akrobatik to name a few. Even back when Quannum was known as SoleSides, Gab and his partner Chief Xcel were releasing underground cult classics like the “Melodica” EP. If you’ve never heard it before, peep the song “Lyric Fathom” and come back to the website after you’ve pulled your jaw up off the floor. Although it was a long four years plus from 1995 until the next EP from the group, they’ve come correct ever since with two of rap’s greatest albums: “Nia” and “Blazing Arrow.” Xcel rocked the beats, Gab showcased both his writing ability and tongue dexterity, and the heads who purchased these albums went home happy.

Some may have thought Gab was hard at work on the next Blackalicious masterpiece, but unbeknownst to the audience he was actually preparing his first solo album “4th Dimensional Rocketships Going Up.” To give you an idea where his head is at, three dimensions is the world we live in and the things we can perceive around us. What could be beyond that? The fourth dimension. Some say it’s time, so Gab could be rocketing around the eons for lyrical inspiration. Some say it’s beyond our ability to even conceptualize, so Gab could be embarking on a journey “boldly going where no man has gone before.” Either way the implication is clear – he’s going places with this album, and he wants to take us along on the journey as far as we’re willing to go.

This science fiction movie needs a score to go along with the dialogue, and thankfully it’s just as good as if Xcel had been rocking the beats. It starts with Jake One on the appropriately named “The Ride of Your Life” and extends all the way to “Ride On” and the bonus track “Just Because,” both produced by Vitamin D. The two trade off duties throughout the album, but with no disrespect intended it makes no difference who does what because they both create ethereal and lush backdrops for Gab to bless on the mic. And he does indeed bless them, in ways that are both uplifting and impressive. Just peep the linguistics on “Way of the Light”:

“Runnin through rhythms proceedin in the torch lights
Floatin on melodies help me make my thoughts glide
Stay inebriated through music I’m off my
rocker rockin into the depths of the lost sky
Jumpin off a cliff in the faith I’m a Fall Guy
Never fallin knowin that heavens we all fly
4th Dimension Rocketships tellin you all why
Wake up from your slumber my children it’s all lies
Money just like everything else, it all dies
The self is lost, and it’s still can I get a dime sack?
To help me focus on wealth, not material wealth
Cause true wealth resides deep inside”

You could cite numerous and varied individual examples of Gab’s dopeness throughout, but suffice it to say each rap is carefully crafted with thought in not only what the words say but how well they’ll be said when flowed to a beat. Gab transforms at will into different styles and never seems inept at any of them. He’ll make use of a quick-stepping monotone on “Stardust,” and instead of being boring it actually blends with the beat perfectly and brings his high speed rap into clearer focus. On the jazzy funk flow of “Up” he eschews formulaic flows where each line has the same ending, weaving in and out of the beat to tell a complex story where he “grabs a pen and a sheet/and empty out my mind so the ancestors can speak.” Deep. He does a hilarious sing-song chorus on “The Writz” you can’t help but enjoy, and keeps a music lilt to his flow throughout. Don’t presume that because he’s on some next shit that he can’t bomb braggadociously, as he and Vursatyl rip a Vitamin D beat apart on “Real MC’s.” You gotta give it up to their punchlines, and I’m still tripping on Vursatyl’s line “I’m off the chain like Slick Rick in a trunk jewelry rehab.” Damn!

The only thing dissapointing about “4th Dimensional Rocketships,” and this is stretching the definition of “dissapointing” to the breaking point, is that this album is only 46 minutes long. This album does pose an interesting question about the longevity of Blackalicious though, since by releasing this album Gab proves he can be just as dope with any other man behind the boards as he can with Xcel, provided they’re as gifted as he is. While one would rather not see their years of dope collaboration come to an end, fuck it I’m selfish. If I had to chose between Gift of Gab making solo albums or not making anything at all, you know I’m going to want the sequel to “4th Dimensional Rocketships.” Gab is so far ahead on that next shit that by the time we all get there he’ll probably be in dimension five.