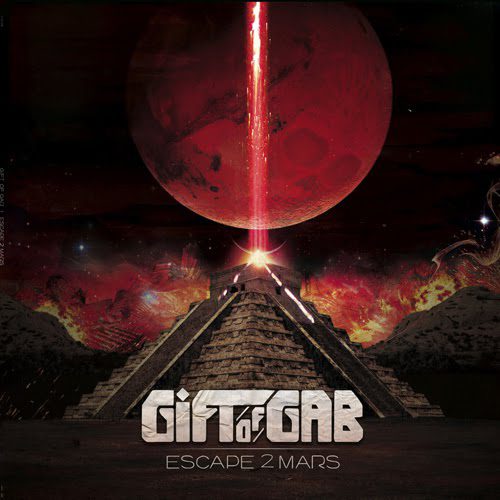 It’s no secret that the RapReviews.com crew are huge advocates for and supporters of Blackalicious, and that undying affection is well earned and deserved. Few things in life not to mention hip-hop are as enjoyable as hearing the loquacious lyricism that Gift of Gab drops over outstanding beats banged out by Chief Xcel. While it was a bit surprising that Gab would break from his vaunted group in 2004 on “4th Dimensional Rocketships Going Up,” the results were no less stellar musically. In fact they were SO good that my review back then pose this thought/concern:

“By releasing this album Gab proves he can be just as dope with any other man behind the boards as he can with Xcel. […] If I had to chose between Gift of Gab making solo albums or not making anything at all, you know I’m going to want the sequel.”

In the five years since that solo debut, we’ve gotten only one new Blackalicious release, but that doesn’t mean Gab has been keeping silent – in fact he formed a NEW group called The Mighty Underdogs that was also lauded by critics and music aficionados alike. Where is Chief Xcel? Good question. You can find one or two references to him having made “special guest appearances” with the Underdogs while they were on tour, but for the most part Xavier Mosley is missing in action. The fact they would appear together in concert as recently as 2008 suggests there’s no animosity between the former partners, but “Escape 2 Mars” suggests both musically and metaphorically that Gab has left Xcel behind and gone on to new heights. The only producers of record on this record are DNAEBEATS and Underdogs maestro extraordinaire Headnodic. For better or worse it seems likely now we’ll never see another Blackalicious album.

It’s hard to say “for worse” though when listening to “Escape 2 Mars.” On his last solo album Gift of Gab implied a TARDIS like approach to hip-hop with a musical journey through space and time, creating an album that was bigger on the inside than the outside. Gab’s newest album is the next logical step in that journey, and the album artwork visualizes that step for us. It’s not hard to imagine The Doctor stepping out of a police box to the sight of ancient Martian pyramids, drawing in solar energy at their apex, illuminating the dusty red soil of the fourth planet from the Sun. The planet has long loomed large in the imagination of humanity, thought of by some as a God of War, though of by others as the only likely candidate for extra-terrestrial life in our solar system. Who wouldn’t want to take a fourth dimensional rocketship there for a visit? Gab visualizes his limitless rhyming ability in galactic terms, which is precisely why he needs to “escape” from the confines of Earth and its gravity to be able to flow freely. There’s no question that “Light Years” is an apt way to describe how far ahead of other MC’s he is:

“The epitome of energy enhanced, centering
Mentally, beginning at the end, remembering
Entering the gates of the Temples of Infinity
Riveting innate sensibilities, epiphanies
Levitating thoughts from the Earth to begin to see
When the trees underneath my feet then begin to shrink
Eye level bird’s eye view where the buildings be
Tendency to find my alignment, it renders me
helpless, submit to the force that is lifting me
Instantly the planet looks small, but my senses freefall
should I say rise, seems like I’m in too deep
Whole life flash by my eyes in like 23 seconds”

We’re traveling far beyond the speed of thought here, and we may have even passed the magnificent speeds predicted by Rakim. The wailing guitars set us perfectly for Gab to soar through the cosmos, but when our narrator touches down on terra firma again he’s got a big surprise in store: “Woke up in my room, it was all in my mind.” Therein lies the true beauty of Gab’s rocketship journeys – he can get as far as Mars from the comfort of his own home and has no intention of stopping there. If you’re willing to go “Dreamin'” along with him you too can take this journey, and so can his rhyming cohorts Del and Brother Ali on the track:

Del: “Ding dong! That’s me at your door
Sir Diesel, The Sandman, gun at your jaw
Uncut funk, THE BOMB, set to detonate
Exclusive, sure to shake up the elusive!
Persuade ya, remind ya, that whinin about
loneliness never gets you to the zone you wish
Diesel my rhyme be the sign of the times
No matter the dateline, I’m the grapevine”

Ali: “Peeps need healin, anger seethin
Wanna grab a piece of that heat and get even
The tradition was steeped in brief beefin
Tryin to each peace and make some new vegans
It’s too frequent, living conditions is indecent
Future been blink, men quit reachin
And all I got left is my speakin
Bout these inner visions I be seein”

There’s no doubt all three are seeing inner visions that are taking us to the outer limits, but this is the only collaborative track on “Escape 2 Mars.” For the rest of the presentation Gab holds down the show entirely on his own and rightfully so, because there’s no topic he can’t touch and not make personally relevant to himself and the audience. “Somathapeople” brings home the wide variety of emotion found in hip-hop from negative to positive, but one gets the feeling Gab most of the time finds himself one of the positive who “are selfless, some who help the helpless” that “find wealth within theyself” and the uplifting uptempo beat reflects that spirit. “Electric Waterfalls” is a funk groove George Clinton could appreciate – futuristic, funky, synthesized as all hell, with Gab modulating sung vocals over the groove. Gab doesn’t always dwell beyond the borders of comprehension though – in fact “In Las Vegas” proves he can tell a fascinating story in a very familiar setting as he attempts to vacation:

“So I get off the plane, smelling like ‘What today?’
Right now a brother may, take off his slippers
That was the purpose hey, just to relax and maybe
put some words on paper, but then the picture
got crowded with temptation, from all the gamble tables
to the pretty ladies, to all the bars forth
like every 20 feet, now see that’s plenty drinks
With all this Hennessy, man I’m a goner!”

If Gab wanted a real retreat he might have picked a snowy mountain peak instead of the neon lights of the City of Vice, but it’s hard to say he paints an inaccurate picture of how temptation’ll get ya while you’re there. In fact that’s what Gab does better than almost any rapper in the business today – paint vivid portraits with his interlaced, intricate, intimate wordplay. The only complaint I have about “Escape 2 Mars” is the same one I had about his last solo album – I wish it was a little bit longer. Eleven tracks featuring Gift of Gab’s superb rhyme writing, breath control and musical flow just don’t seem like enough, but the amount of content he packs into that small space creates an energy density comparable to NOX, fueling this rocketship all the way to Mars and beyond to distant stars. When you’re ready to take that ride Gab will be waiting with the doors to his TARDIS open, beckoning you to join him on a voyage beyond your imagination that takes place within its core.