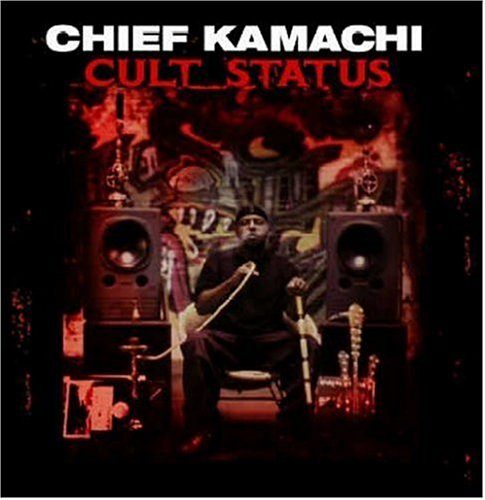 Anybody named fucking Chief Kamachi isnâ€™t looking for Ashanti advocates and â€œ106 and Parkâ€ fanatics. So all of you prepubescent socialites and tittieless teenagers go pick the pizza out of your food-imbedded braces and keep checking the Bad Boy bracket for you-know-who, this oneâ€™s not for you. Now who do we have leftâ€¦anti-pop activists, anger management flunkies, and recent pink-slip recipients- check, check and check. Alright itâ€™s time to delve into the dark side.

After hooking up with the vile Vinnie Paz and Jedi Mind Tricks to record a few chipper tracks like â€œDivine Evilâ€ and â€œThe Deer Hunter,â€ Kamachi just wasnâ€™t satisfied with merely flirting with decadence, he had to have the whole shebang. So woefully low on Valiums and flat out of hugs, he embarks out in â€œCult Statusâ€ to prove heâ€™s not a MC to mess with.

And he does. Maybe itâ€™s the possibility that the Chief will tomahawk me with a microphone if I donâ€™t comply, but â€œCult Statusâ€ is ferocious- in a good way. Kamachi ravages each track till there is no meat left on the mic. He bites mics in half. Everything about this guy is irate, even his raspy voice sounds like he just devoured some small, hairy animal whole. But whatâ€™s this? He spits a little science out in-between feedings? It seems this heathen has been hitting the books and wants everybody to know about it.

From the â€œ1st Lessonâ€ to the last track, Kamachi just canâ€™t stop proclaiming himself a street deity. Now self-worshiping rappers are nothing novel, weâ€™ve all heard the Wu-Tanged slang title â€œGodâ€ before; but the Chief fervently believes you should be worshiping him in addition to his man in the mirror, and incessantly hammers his self-righteous, religious rhetoric down your throat through â€œCult Status.â€ Under the guise of conscious constituency, â€œCult Statusâ€ pretends to enlighten and Kamachi acts ingenious. Problem is, heâ€™s a messiah with no message. Other than a few social-focused lines accidentally scattered about, (and â€œ#13â€ gets an E for effort) Kamachi spends 90% of his proverbial verses preaching about himself and how great he is, and the left over worrying about his fictitious followers.

Not to say his scholarly arrogance ruins the ride. â€œThe Edgeâ€ couldnâ€™t be stopped if you sedated it with Tyson tranquilizers. â€œThis Manâ€ is solid all around as it continues to pleasantly swell the middling torso of the album. Also, â€œThe Bestâ€ is delightfully demented, sporting a screeching Psycho sample and Gangstarrâ€™s Guru for street support. Kamachi gets sick and sinister but itâ€™s the cleverly contrasted calm flow of Guru that steals the thunder.

â€œYo Iâ€™m humble and calm
But I still rumble and bomb
And any Gay-Z lazy rapper
I crumble in my palm
They play roles and could never rock me
Iâ€™m well connected, well protected and I rock Kamachi
Bout to take ours back from the culture stealers
Cuz weâ€™ll never see power unless we let our culture heal us
The strongest people call us the soul survivors
So beware of the burning sands and the molten lavaâ€

However, all the campaigning and Christ comparisons continue to run unchecked. By the time you hit â€œHaten on my Haloâ€, â€œCult Statusâ€ begins to resemble a real cult. A group blindly led by the ego of one man. His introspective ignorance collides with his arrogance on â€œLiberated Waxâ€ when he blusters â€œyaâ€™ll niggas is fuckinâ€™ stupidâ€ as homely as possible.

I guess Iâ€™m just tired of these anti-pop rappers thinking that just because they fall in the â€œindieâ€ category at the record store that they are automatically profits. I not saying reading is and upping your vocabulary is futile, Iâ€™m just saying use a hungry mind to feed more than your ego. Kamachi impresses with vivid imagery and decrepit descriptions. But utterly chafes his emancipating intentions by reiterating Rapâ€™s rhetoric of disdainful aristocracy. A sad cycle of rappers, debunking each other to get ahead themselves, only to be pushed back down by someone else, a gigantic dog pile where no one gets the ball buried underneath, the point buried under bodies in the street.

As the GZA said, â€œI’m not caught up in politics; I’m no black activist on a so-called scholar’s dick.â€ If you wish to collectively elevate your audience, or whet them away from coma-ville, just think about what you say and what you insinuate in your raps.

â€œCult Statusâ€ is invigorating nevertheless. The Chief is evidently irate about somethingâ€¦or everything, and fortunately it makes for vivacious vocals. Musically, if â€œCult Statusâ€ was left all to its lonesome, it would flatline before the production paramedics could call Dr. Dre to palpitate it back to life. But Chief Kamachi is just too damn ferocious to let this album flop. Itâ€™s at least worth the blood pressure to pop in pre-riot, before a Tyson fight (Old Tyson), or really any violent event that commands un-directed animosity. Bottom line: If youâ€™re an angry mother fucker, buy â€œCult Status.â€