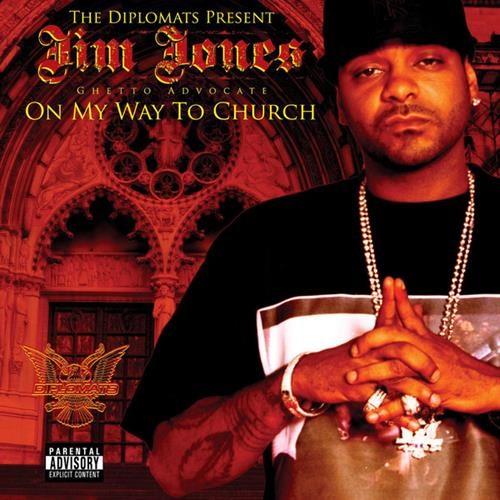 Jim Jones :: On My Way to Church

If the measure of a good critic is that people disagree vehemently with his or her reviews, many of the Diplomats fans out there would happily crown me with a Ph.D – not a doctorate, but a Playa Hater’s Degree. Even when I was reasonably lukewarm to albums like Cam’Ron’s “Come Home With Me” or Juelz Santana’s “From Me to U,” the volume of e-mail I got was hard to fathom. Diplomats fans rival and in some ways exceed the passionate loyalty Wu-Tang Clan fans showed in the 1990’s, pushing nearly every solo album released to gold or better and getting even tertiary artists like Killarmy and Shyheim Da Rugged Child to blip on the music industry’s radar. It’s safe to say before this review is even started that if this album was good enough to rate 9’s across the board, the DipSet legions would still be mad that I didn’t give it 10’s.

Jim Jones does intrigue me as an artist. While Cam is the recognized leader of the DipSet and their best known member, Freekey Zekey always lends a hand, and Juelz may be the most quoted member and the one with the most potential, Jones is still something of an enigma after all this time. People may in fact know him best for his comments regarding Nas, calling him and his Bravehearts family “a bunch of homo niggaz.” It’s not entirely clear if Nas considers this challenge worth responding to on his forthcoming album, but if it was a publicity stunt to get Jones name out there it worked. The anticipation for his “On My Way to Church” debut was subsequently heightened by the familiar sound of his lead single, “Certified Gangsta.” If you listen to the track and catch yourself rapping the words “cause the boys in the hood are always hard, come talkin that trash we’ll pull your card” you’re either old school or well educated on hip-hop classics. Either way, heavily edited mixes of the track have been spinning at every media outlet, building up to the point Jones was almost certain to have a solid debut his first week on the Billboard charts.

The first single got a mixed reaction out of me. While I was pleased to see someone go digging in the crates back to an West coast classic, this song is far from a remake. While Eric Wright was never considered a “great” rapper, his casually sly flow on “Boyz N the Hood” became a template for legions of imitators to come. The difference is especially jarring in the chorus, where guest rapper Bezel tries to fit 23 words into the first two lines, a space once containing only 18. While Eazy-E got to pause at the end of each line for both style and emphasis, Bezel-B is on the verge of exhaustion trying to cram ten pounds of shit into a five pound bag. Jones himself is far less embarassing, even working in a few references to the original in his verses:

“And – the first bastard get fly
You know BIP BIP BIP was my reply
Eighty-nine wolf pack and we wylin (F.T.W.)
P-89 pull gats cause we violent, shit
Yeah, we put coke on the strip
Don’t quote me boy cause I ain’t said shit!”

Jones may have the deepest, most thick tongued voice of the entire Diplomats. If rap were organized like baseball, the DipSet could trade him to Rap-A-Lot for two MC’s, a million bucks, and a player to be named later. Jones is also a slow flower by nature, which makes him an acceptable substitute for Eazy-E. At some point though hearing this song just starts to irritate me, because sample clearance and legal fees may make this beat legit, but to me Wright put a stamp on it and after that can’t nobody else say shit – so let’s move on. If Jones is indeed “on his way to church” then his lyrics should probably reflect a broader vision and more spiritual message than his contemporaries, and having Dr. Benjamin Chavis do the album’s intro indicates Jones and/or the DipSet were at least thinking about that point. On the other hand, Jones lyrics in “Crunk Musik” are anything but positive:

“Call me Richochet Rabbit
Cause I click and spray ‘matics and my niggaz straight savage (Goonies!)
Penelope pump let off six whole rounds
‘Fore one shell hit the ground”

Just to make sure you get the point, those last two lines are punctuated with the sound of six gunshots. A for effort, F for cleverness. Jones clearly has a fetish for guns, nihilism, and the mafia. His songs range from “Shotgun Fire” to the ‘Pac-esque titles “Livin Life as a Rider” and “When Thugs Die” to “Capo Status,” with several “Takes” done throughout the album like a badly directed movies, or “Godfather Part III.” Jones may go to church to seek redemption for his sins, but he’s not what you’d call a “spiritual rapper” in any way, shape, or form. This is not to deride Jones though. Honestly I didn’t expect that kind of message from any DipSet rapper, so suffice it to say Jones is living up to his parental advisory sticker. There are a few moments where Jones allows a little light to shine through his dark narrative though, and I do mean a LITTLE. Even the light melody and chorus of his “Lovely Daze/Memory Lane” track is betrayed by lyrics which seem to show him on the edge of a nervous breakdown:

“You know how kids scheme, we had big dreams
Of coppin them Benzes up on the big scene
All glittered and jeweled just like Liberace
Look at my Dip posse, look how the shit done got me (crazy)
I’m on some paranoid shit (yup!)
It’s kind of scary, I carry the four-fifth (who want it?)
It’s kind of brazy that it be like that
It ain’t no play me and you be right back
You better blaze me if it be like that (get me nigga)”

The one thing really worth focusing on throughout this album is the music, as there are some very clever and enjoyable tracks. “Spanish Fly” featuring Chico DeBarge has an uncredited sample from “Scarface” which has been chopped and redefined by Blackout Muzik into a wholly new form. “End of the Road” featuring Bun B and T.I. may be the album’s best song, thanks to the guest vocals and a Heatmakerz instrumental layering together heavy piano chords and a superfast sample you’d expect on a Kanye West track, but all stitched together at a very slow pace accentuating chunky bass. Chad Hamilton’s beautiful chords on “Twin Towers” featuring Bizzy Bone sounds more like a Thuggish Ruggish song than a DipSet song, but you can’t fault it for that. The album’s most mellow and refreshing track may be the DJ S&S laced “Talking to the World,” which is also one of the few times Jones doesn’t seem overly obsessed with his gangsterish ways, even admitting “some think that I’m twisted, cause I smoke too much and I drink ’til I’m twisted.” No props for rhyming the same word twice, but at least he’s being honest.

So in the end, all I can really say is that the DipSet fans are probably going to be mad again at this review. So far, Juelz Santana is still the only one who shows enough style and cleverness to rise above mediocrity. That’s not to say that Jones doesn’t have a good voice, or that he doesn’t at least stick to topics that he’s comfortable with. The banality of his lyrics ultimately wears thin though, especially on an album that’s over an hour and twelve minutes long. Most of the production and at least some of the guest stars will help you travel the road with Jones on his way to church, but you’ll probably be exhausted by the time you get there. I’m honestly not trying to hate on the DipSet, but by the same token I can’t be forced to praise something that doesn’t function well as “reality” gangsta rap or grimy New York hardcore either way. The funny part is that each member on their own seems to have four or five really good songs per album, but when they all come together for a collaborative effort they are an anti-gestalt. In other words they are the opposite of the aforementioned Wu-Tang Clan – when they come together they are LESS than the sum of their parts. Jim Jones does sound better on his own, but that’s about it.