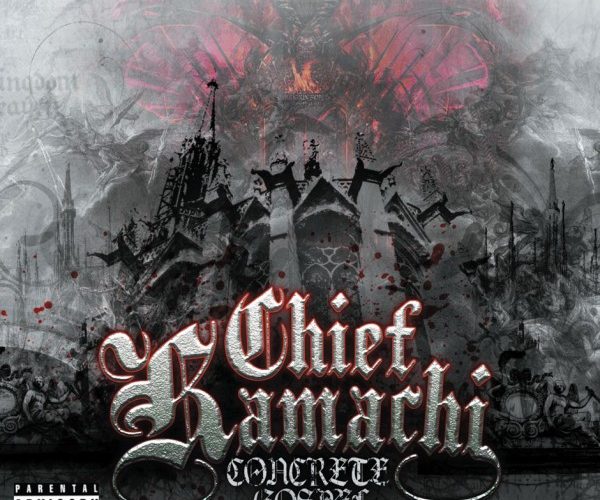 Babygrande Records have come a long way since I first ran across them. When I bought the first JMT album they released, they had a small, but powerful roster of underground acts. Today, the label has a huge roster consisting of both underground and street acts. In all honesty, most of the acts on the label are a blend of both underground and street and nobody embodies that mix more than Chief Kamachi. First gaining bigger exposure on the Amry of Pharoahs project, Kamachi’s rumbling voice definitely stood out but it was hard for him to establish much of a presence with so many rappers sharing the mic. On “Concrete Gospel,” Kamachi shines with his street-conscious style on full display.

“Concrete Gospel” is a short but satisfying experience, clocking in at 13 tracks and 47 minutes. The production is handled by DJ Huggy and E-Dan, a duo that boasts working with Ghostface Killah. I won’t front and act like I’m familiar with the team but their performance here is definitely noteworthy. Chief Kamachi’s work tends to have heavy and dark overtones so most of the beats here follow suit. But the producers do a good job of making sure the music isn’t too depressing. “24th Elder” features some classical sounding strings but bounce is added with a simple but slick piano line. “Jim Kelly” is as close to an anthem as someone like Kamachi can produce thanks mostly to DJ Huggy and E-Dan’s soulful and uplifting horn arrangement. “We Still Searching” is an energetic track that cleverly uses a sped up soul loop but adds variety with well timed breakdowns. The beauty of the track is that the beat is versatile enough to fit Kamachi’s style but could have very well been a hardcore street anthem or a heartfelt dedication. The closest the crew comes to a misstep is “U-Cry” where the track sounds a little simple compared to their other work, but even so the beat matches Kamachi fine and ends up as an above average track.

Kamachi’s style is all over the place, yet very focused. His music has a hardcore street edge to it, but it is balanced by a strong social message. Kamachi is also revolutionary and religious at the same time. It’s a balance that can be difficult to reach but Kamachi has no problem with it. With an album named “Concrete Gospel” you’d expect some religious undertones and Kamachi delivers on tracks like “The Gospel,” Scattered Sermons,” and “Holy Rollers.” “Holy Rollers” is especially dope as the only guest on the album, Statestore, delivers a solid verse:

“This for my broke brothers that’s leaking
The have-nots and the heathens
Who work hard and hustle just to spend it all on the weekend
We â€“ live without reason
Numb our brain with liquor and cheeba
Get tore down, hollering for God to help us
Everything we take is truth, a misguided message
The hood, better grimey, jealous, aggressive and desperate
And we exit in enormous numbers
Stressed out and restless
City infested, Avenues infected
And the struggle to success?
Only accumulate the herb and depression
Now how in the hell we supposed to get it together?
We go from no diplomas to obituaries
Seminaries and cemeteries, all we know is stress and worry
Nosy neighbors, hoodlums and haters
We reach for the sky
Steady wonder why ain’t no angels coming out of heaven to help us out
We know the situation full of doubt, so look at us now”

Kamachi is not the one to be outdone:

“I’m like, what?
God ain’t got no love for the kid
Home from a bid, living all scared, clutching a rib
Little scruff, barely enough to puff production at crib
Small hands of a crack baby touching his bib
From a heartless dark place where the evil is hid
Sliding board of addiction where my people done slid
Only thing in life that really seems equal is dead
Don’t need a shrink to take a peek and see through his head
Just study this hood culture where the future is lead
And understand how a young child could shoot you for bread
His whole like “Stop Snitching,” “Fuck the blue and the red”
Running the spot, gun cocked, give two to the dred
Only shook when the lookouts holla “The Feds!”
Then you dash, quickly stash or swallow the meds
Upstate, stressing, pacing, walking the edge
Second tier, come in here, get tossed from the ledge
I’m a crazy celly, like a war crazed Isreali
I try harder but it seem like these days will fail me
See I’m a psycho, in an asylum I might go
Or I’ll be at the door of the lord with a rifle
Cuz I want more than james, junior, and Michael
Or I’ma keep studying this criminal bible
Psalm one, Palm gun
Ain’t no fears in kings, so be prepared for the long run”

The rest of the album, while not overtly focused on religious themes, still reflects the mind of a man who is constantly at war with different motivations. On one hand Kamachi is as street as they come, but he’s equally aware of his surroundings and has a genuine wish to uplift his community.

Kamachi is a rare rapper. He keeps his street edge but isn’t trapped in clichÃ© themes. He reaches a middle ground for those who don’t like their rap one-sided. Kamachi is also a true emcee, meaning there is definitely a lot to like past his message. His flow is impeccable, his lyrics on point, and he isn’t afraid to flip things conceptually. Along with his Philly brothers, Jedi Mind Tricks, Kamachi is ushering a new style of rap that is equally appealing to a variety of rap fans. Hopefully Babygrande will provide the proper avenue for his message to spread and, most importantly, heard by the masses.