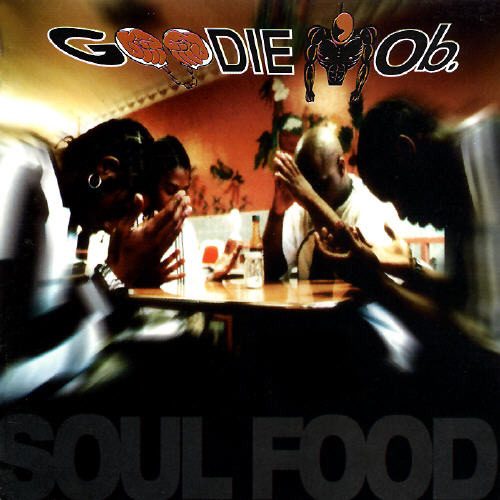 In the mid-90’s, in the deep South, something was brewing. Outkast had just dropped the classic “Southernplayalisticadillacmuzik,” and on the strength of “Player’s Ball,” people started to take notice. Not much was known about the group called Goodie Mob, however. Despite their appearances on “Call of Da Wild” and “Git Up, Git Out,” no one could have imagined what would follow their introduction to the game.

In 1995, one year after Outkast debuted, the Goodie Mob followed suit. Despite the similarity in style between the two groups, the albums were vastly different. While “Southernplayalistic” relied on light-hearted rhymes with scattered moments of vision, their fellow Dungeonites went an entirely different route. “Soul Food” is one of the most spiritual rap albums ever made. It is steeped in ghetto poetry, and yet never ventures into exploitation or sensationalism. Without ever sounding insincere, the foursome weaves stories of love, sadness, and rebellion. They obviously had an agenda during the creative process leading up to their debut, and the visceral, insightful rhymes reflect that. From the opening “Free,” the Goodie Mob is clearly trying to move minds rather than butts.

“Thought Process” starts things off right with production that is simultaneously slamming, catchy, and soulful. As the drums weave over the track, introductions are made by T-Mo:

“Let me get a chop at this lumber
niggas from down underground and hangin’ around the A-Town
Lookin’ for a come up, workin’ from 9 to 5
Just to get some change so T-Mo can stay alive
Not greedy or living lavish yet but you can bet that when I do
Nobody from my crew will I forget”

Each member takes his turn, as the cut runs as a constant stream of consciousness. Every word is drenched in dirty-south slang that creates something completely unique. By the time Cee-Lo and Andre wrap things up, everyone listening will be completely immersed in this modern-day soul music.

“Dirty South,” the unofficial anthem, ups the ante. For starters, the beat is one of the most involving, head-nodding works in all of rap history. Organized Noize has quite a track record, but this is certainly near the top. Each verse, including one from Big Boi, tells stories of the “blow trafficking” in their neighborhood. By name-dropping and mentioning specific places, they manage to put the listener right there with them. The crown jewel of the song, though, is the chorus, which is guaranteed to have you singing along by the second time through.

The album’s single, “Cell Therapy,” follows, telling several tales of paranoia on par with “Mind Playing Tricks On Me.” Over an ill piano loop, Cee-Lo relates his worries:

Throughout “Cell Therapy,” imagery assaults the listener. Lines like “unmarked black helicopters swoop down/ and try to put missiles in minds” just beg for a rewind. Once again, though, the hook is what brings it all together. The ominous singing of “who’s that peeking in my window/POW! Nobody now” is permanently carved in the annals of rap history, due to its inventive and menacing delivery.

The hits just keep on coming. “Guess Who” is a superb ode to mothers, highlighted by another heartfelt verse from Cee-Lo. As with every other cut on “Soul Food,” the hook holds the song together. The extraordinary crooning of “Cee-Lo and the Family Tree”, as it is listed in the liner notes, puts the finishing touches on an already excellent concept song.

“Live at the O.M.N.I.” is Goodie Mob at its subversive finest. Crafting verses Chuck D would be proud of, the four discuss the penal system with incisive ease. “Goodie Bag” is the usual ode to marijuana, but it is executed in such a fashion as to sound fresh. The stunning title track puts you right next to them at the table as they describe their favorite foods:

The understated beat emphasizes the vocals, and when they sing the chorus together, it is truly beautiful. The cover of this album has the Goodie Mob sitting at a table in a restaurant, heads bowed in prayer. This is a powerful message in itself, because it reveals them in the state they are most vulnerable. What is contained inside is even more impressive. This is a remarkable feat in hip-hop, an absolutely slamming album packed with grit and soul. On what other disc can you find the group belting out hooks like they are in the shower? Where else is it acceptable for Cee-Lo to stop the beat dead in its tracks, just so he can talk about the freedom that is eluding him on “Fighting?” Nowhere else but here.

Aside from Goodie Mob’s superb vocal performances, what really makes “Soul Food” jump is the production. Tweaking their sound slightly from Outkast’s debut, Organized Noize comes up with a collection of some of the funkiest beats the world has known. The heavy bass and drum patterns will make it rattle your trunk, but there’s enough substance to each production to make the album immensely enjoyable in other settings as well. Managing to create a unified sound without sacrificing creativity is difficult, and Organized Noize does just that on “Soul Food.” The album plays beautifully as a whole, yet each joint sounds great on its own.

The use of the word “dirty” in reference to the South has never been more accurate than on the Goodie Mob’s marvelous debut. Each rhyme on “Soul Food” is gritty and raw, with their twanged speech sometimes hard to follow. Each song pulsates with energy. This is one of those rare albums that was born, conceived, and recorded from the heart of the ghetto, and it revels in its own griminess. Common Sense once said “hardcore is far more than bats and gats/it stems back to the roots of being true.” The Goodie Mob must subscribe to this theory. Their debut album is a glimpse of what they live, with nothing added for effect. Their religious beliefs, fears, and opinions become clear through their music.

While most rappers are doing their thing for a living, “Soul Food” has Goodie Mob rapping for their livelihood. They each had a lot to get off of their chests. Because of the spiritual nature of each of their lives, they have crafted a work that is completely pure and personal. This record is on my very short list of favorites, simply because of the strength of their message and the sublime manner in which they execute it. With the utmost hospitality, the Goodie Mob welcomes us to the dusty streets they call home, and for that I thank them. Hip-hop is a better place for it.