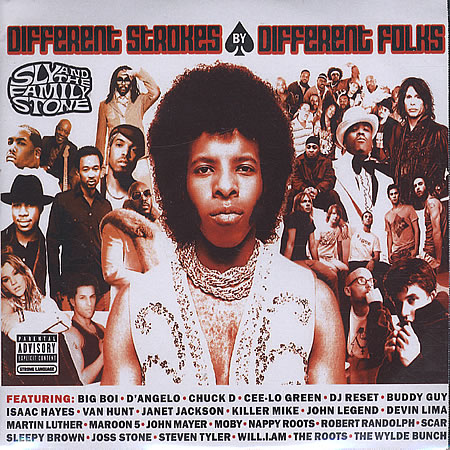 There’s no point in asking who produced what on “Different Strokes by Different Folks.” Even though some of the artists involved can be credited for remixes or different vocals, the songs as such are ALL by Sly & the Family Stone. The song titles are the same, the beats and instruments are the same, and the vocals are the original vocals. Even if you’re too young to remember the original era of dance and funk grooves they simultaneously pioneered and dominated, you’re not too young to know the songs featured herein.

Anybody who has listened to R&B and hip-hop in the last twenty years would easily recognize the songs covered and reworked on this compilation. “Sing a Simple Song” along might actually be a contender in the Guinness Book of World Records for most sampled tracks of all time. The list of artists who have borrowed from it is incredibly diverse – A Tribe Called Quest, Das EFX, Michael Jackson, Wu-Tang Clan, Soul II Soul, LL Cool J and the Gorillaz just to name a few of the hundreds to loop from it. It only makes sense the artists covering it here would be equally diverse, as this is likely to be the ONLY time you’ll hear Chuck D, Isaac Hayes and D’Angelo together on one track. You’ve heard “Family Affair” everywhere from the Black Eyed Peas to Janet Jackson, but on “Different Strokes by Different Folks” you’ll hear John Legend and Joss Stone (no relation to the original Family Stone) rocking with Van Hunt. You may only know “Everyday People” from Toyota commercials, or recognize it from Arrested Development’s “People Everyday,” but Maroon 5 bring new life to this rock classic. The song’s message of tolerance and equality still resonates today.

At this point you might be wondering about the relevance of the review in a hip-hop context, but when I picked up this album and considered reviewing it the line-up of guests make it a no-brainer. “Dance to the Music” has a rap by will.i.am, “Star” features The Roots reinterpreting the Family Stone jam “Everybody Is a Star,” both Big Boi and Cee-Lo get down on “(You Caught Me) Smilin'” and the Nappy Roots update a protest song for modern times on “Don’t Call Me Nigger, Whitey.” Even though artists from Moby to Steven Tyler participate in “Different Strokes by Different Folks” it’s hard to deny a pervasive sense of hip-hop soul permeating the entire presentation. Even a mash-up track like “Thank You Rhythm Nation 1814” elegantly combines a Janet Jackson song which sampled the original WITH the original, which is the kind of turntablism wizardry you’d undoubt enjoy at your favorite Friday night hip-hop spot.

The danger of this review is the natural tendency I have to overrate the album, simply because of how much I love the music of Sly & the Family Stone. I’m willing to admit there are some purists out there who may find these remakes at best unnecessary and at worst blasphemous. Some many even be outraged that the revisited “Family Affair” herein won a Grammy Award for Best R&B Performance considering the original song never did. My own tendency would be to ignore such concerns. In the words of the both will.i.am and the original band this album makes me want to “Dance to the Music,” regardless of the fact you might suspect I literally have two left feet if you ever saw me cut a rug. This music is infectious though and that’s reason enough for me to recommend both the originals AND their covers. You can’t help help but smile and enjoy Sly & the Family Stone either way, which is why there have always been and always will be different strokes for different folks.