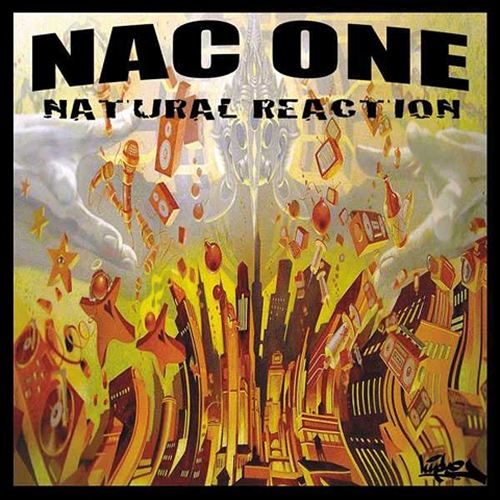 as reviewed by Nin Chan

Okay, I gotta vent, y’all. Quoted from the press release: “…will appeal to the the Def Jux/ Rhymesayers crowd. Natural Reaction, soon to be a hip-hop masterpiece, will be embraced by college kids and lovers of independent hip-hop music worldwide.” This quote admittedly angers me on several levels. The myopia inherent within this statement is indescribably frustrating and hopefully this statement does not represent the intentions of the artist- for the artist to limit his target audience to ” [the] Def Jux/Rhymesayers crowd” and “college kids worldwide” is tragic. I’d slap my publicist for drawing up that gimmicky statement, it would suggest that I’m attempting to emulate the sound of a prevalent, popular sound, which to Nac One’s credit is something that does not occur on this release.

Peep game. Nac One is apparently a graf artist/emcee (much love to all hip-hop renaissance men dabbling in various creative endeavours) hailing from the Bay Area, an area blushing with an abundance of talent. Having honed his craft for a number of years performing with a host of top-shelf artists like the Fugees, Nas and fellow Bay representatives Ab Rude, Freestyle Fellowship and the omnipresent Living Legends crew, Natural Reaction is his virgin attempt at forging a dent in an underground rap scene that seems to be nearing saturation.

In all earnesty, Nac One is a decent emcee. Intelligent and outspoken, his rapid-fire delivery is technically polished, and structurally his rhymes hold their own. Upon further scrutiny, however, the holes within his verbose, zealously executed rhetoric are rather apparent, especially to fellow emcees- his voice is indistinct (ie, if he were to jump on a track with another rapper I would find it difficult to distinguish him) and his greatest fault is the fact that he suffers from a stigma that stifles a good proportion of independent rappers- so enamoured is he with battle rap and so fixated is he with asserting that he is a better emcee than you that he completely forgets to make his music engaging. Nac One would have done better with delving into other dimensions, for he lacks the vocabulary, charisma, insistence and wit required to craft an interesting battle rap, let along an entire album oriented around battle rap. Instead, we find Nac One stumbling over syllables, punctuating his flow with awkward pauses and littering his album with unimaginative punchlines:

“Now these emcees wanna get personal
but don’t know my history first of all
you’re playing a game of pain that’s irreversible
when I strike the mic, I’m not merciful…
I return to the open mic session
with my skills represented by progression
with the whole crowd bouncin’ to the words I’m pronouncin’
’cause now I hold it down there’s no testin'”

If I were to name an emcee that Nac One reminds me of, I suppose I’d reply that I hear a little Kool Moe Dee, and a little Jeru Tha Damaja, although Nac One has neither the wit of KMD nor the depth of Jeru, what he does share with both of these emcees is their rather straightforward execution and lack of pretense. When he does attempt to delve into complex structures it doesn’t often yield positive results- “With my rhymes pumpin’ in your cardiovascular, ambassador of vernacular, words smackin’ ya, all spectacular per capita” What on earth is that supposed to mean? Vocabulary is straight when you flex it properly, as opposed to merely throwing together a litany of words that rhyme in a vain attempt to sound sophisticated.

More complaints. The album is produced by the eminent FANATIK. Dude was the first artist to issue an album on the most formidable underground institution in the game today, Stones Throw Records, and has flown SERIOUSLY under the radar since that record, “Phanatik Beats” (Hell, I have no idea what he’s been doing myself). In a valiant endeavour to erase his current flash in the pan status and salvage some street cred (his most notable beat is Rasco’s “Unassisted”, what other Fanatik beats can you name?), he has placed his thumbprints on some solid work here that wears its influences on its sleeve yet never loses sight of its intent to involve and excite. “Natural Reaction” sounds like a crash collision of the Alchemist and the RZA, “Goin’ Through It” exudes an irrepressible, organic funk, punctuated by punchy staccato digital blips. “Get Mine” switches between two strong beats the same way, say, Planet Asia’s “Definition Of Ill” did, the first an avant-garde, discordant collage recalling El-P, the second a darker, sinister beat with insistent bass and raw harp. While “Hand Crafted” and “Meditate With Me” don’t fully succeed in emulating Premier and Pete Rock respectively, you can’t help but smile at how he integrates obvious elements of both in these beats. So what’s to complain about? Nac One never really rides a beat the way an ill emcee should, and often the chemistry between producer and emcee is SORELY lacking- the brooding introspection of “Winter Again” is stifled by unimpressive posturing and in some spots, incomprehensible sci-fi babble by Nac One and guest Cam. The Gang Starr funk of “Hand Crafted” is marred by a stale hook (though to his credit Nac One delivers his best lyrical performance on this track): “It’s hand crafted, original classics, traditional rap hits, with lyrical tactics”. Bluntly put, there is no cohesion between the beats and the emcee, one is left feeling as though they are two separate entities as opposed to existing as one homogenous whole, meshing together to form a dope slab of arresting boom-bap.

What’s even more disheartening are the record’s misguided attempts at crafting anthemic dancefloor tracks. On “Nac One” Fanatik’s rep-the-influence ethic fails miserably as he attempts to replicate Dr Dre G-Funk (while lacking the dimensions and understated elegance of a Dre track), as Nac One’s trite exclamations of “Put your hands in the air if you have no fear..when I say Nac, you say One!” garners more yawns than booty claps, while the Donald Byrd/Roy-Ayers-ish “Summertime Joint” comes the closest to sounding definitively West Coast than any other track on the album, only it is once again stifled by a horrid hook: “I got the sun shinin’, in my mind I’m feelin’ fine, ’cause it’s summertime, it’s summertime”. Once again, independent emcee disease part 380, utter inability to write a good hook.

This is not a bad album by any stretch of the imagination. At the same time, there aren’t enough redeeming qualities for me to justify a purchase. Nac One delivers his verses with vitriol and the confidence of a battle rapper worth his salt, but his performance lacks the incisiveness, audacity and cleverness of Slug, Brother Ali, I Self Divine, Mr Lif, C-Rayz Walz, all rappers hailing from the twin camps Bomb Hip-Hop strangely attempts to focus their energies towards. Natural Reaction is far from being as avant-garde or adventurous as either of the aforementioned labels, and while this is far from being a negative thing in itself, it unfortunately epitomizes many of independent hip-hop’s most cancerous shortcomings as opposed to championing its strengths. A fun listen if digested as a sporadic, superficial listen, a more thorough and extended listen reveals flaws that render the record a haplessly frustrating experience.