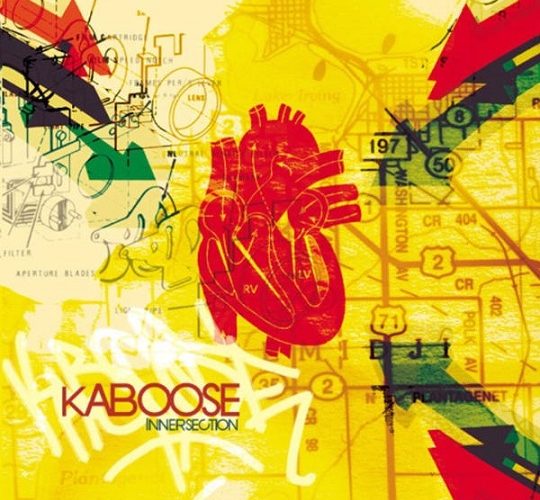 Christian rap is a sub-genre that is not frequently explored. Much of the reason for this is a lack of mainstream appeal. No one wants to turn on the TV and see rappers professing their belief in God, especially in the place of the usual scantily clad females. For me, the turn-off has always been the preaching. I don’t like being told why I am wrong and what to do about it. The bottom line is that Christian rap seems to have been made with a very select audience in mind, which is why it has never reached the masses.

Kaboose’s debut album “Innersection” would be filed under the “Christian Rap” category at your local record store, if there were such a thing. After a listen or two, however, his influences aren’t entirely clear. Instead of shoving his beliefs down our throats (as many rappers do), he takes a more indirect, and effective, route. Besides being a very capable emcee, he mixes introspection with moving the crowd, creating a disc that is not too heavy in either area.

As you can see, he is far from a one-note rapper. He also has a marvelous delivery, and doesn’t waste any words. He mixes battle-rhymes with reflection seamlessly. He is, in a word, dope. When a couple of capable mates join him, the results are even better. This will be obvious when you hear “Action Figures” featuring Just Me and Cas Metah, which emerges as the best song on the album.

Because of his skill, when Kaboose raps about God, it is inspiring. He is adept at putting his thoughts together, so when he discusses his passion he shines. Instead of denouncing others, he simply relates how God has helped him, which is refreshing. I still prefer the Kaboose who spits fire, but he will hold your attention on every song, no matter the subject.

Up until around the halfway point of “Innersection,” every song is nice. The funky production fits Kaboose’s style perfectly, and the guests do their part as well. Towards the end, though, the music slows down and begins to drag. He rips it nicely over each fast beat, but when the production mellows out, Kaboose loses steam. A couple of the songs sound the same as well, which suggests that some material could have been cut. The production becomes less stimulating, which makes it difficult for him to shine. Before the outro at track 17, you’ll be fiending to get back to the beginning.

The album does have its problems, but the positives far outweigh them. There are several missteps, but Kaboose could have done a lot worse. He is a talented rapper who has found plenty of music that suits his style. This much is evident throughout “Innersection.” With a little trimming, this could have been a remarkable work.

If the label of “Christian Rap” turns you off, it is your loss. Kaboose is far from a missionary, he just wants us to know his story. In fact, he really is just a religious man who happens to have serious mic skills. He is consistently nice and occasionally shines, especially over the speedier productions. Look past any biases you might have, and you’ll be happy you did. Although “Innersection” fades towards the end, it still is a good introduction to a potentially great emcee.